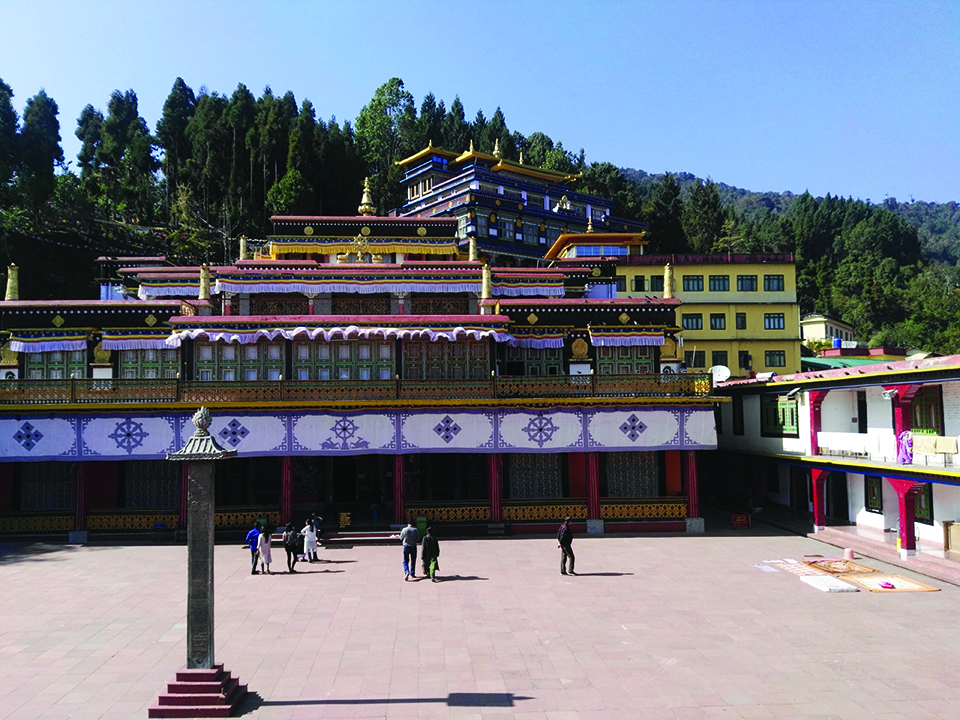 Gangtok is teeming with early-winter tourists. Due to the unpredictability of recurring Gorkhaland agitations, Bengalis have begun to avoid hill stations of their own state. Unlike decaying Mall Road of Darjeeling, the MG Road in Gangtok appears decadent with the full spectacle of capitalism on show.

Ironically, just as the visage of the ‘half-naked fakir’ adorns the Indian currency, his statues stand guard as visitors stroll through the street of commerce named after him with ice cream in hand. Pointedly, some upscale outlets have put up notices that shoppers aren’t allowed to carry cups of frozen pleasure into their carpeted premises.

A short walk from the graven image of the ‘Father of the Nation’, a statue of ‘Father of the Constitution’ BR Ambedkar seems to be reminding members of the Sikkimese legislature of their onerous responsibilities. A life-size figure of Kazi Lhendup Dorjee Khangsarpa in front of Sikkim Legislative Assembly bears testimony to the fact that he was at the forefront of democratic struggles. He is designated as the ‘Father of Democracy’. Sikkimese have put their father figures on lofty pedestals and then forgotten all about them.

Even as the Dhoti-clad Mahatma is revered, Dhoti continues to be a term of abuse for people from the plains. Few seem to know that Babasaheb was a Buddhist, a constitutionalist and one of the greatest champions of politics of dignity. His name is often identified merely with the awakening of Dalits.

Unlike in Nepal, where ‘Sikkimization’ is a phrase to denigrate Madhesis and Indians alike, Kazi Lhendup isn’t associated with his notable deeds of the mid-1970s. Sikkimese have punished the Kazi more severely: They have completely forgotten him. When asked about his legacy, most youngsters draw a blank. Perhaps the only consolation for his followers is that even fewer people seem to know anything about the last Chogyal.

The special status of Kashmir has fallen prey to armed conflict. Sikkim enjoys similar privileges of autonomy without much fuss. Only Sikkimese Origin Indians are allowed to buy land inside the state. The state government issues permits of entry to all outsiders. Locals get priority in jobs. And the central government showers the state with subsidies in just about everything.

Continuity of conflicts in most part of the Eight Sister States (Arunachal, Assam, Manipur, Meghalaya, Mizoram, Nagaland, Sikkim and Tripura) of north-eastern India beyond the Chickens Neck at Bangladesh, Bhutan and Nepal borders have hampered their progress. Sikkim has drawn larger than its fair share from special industrial development packages meant for all north-eastern states due to its relative political stability. The reigning Chief Minister Pawan Chamling has been in the chair for quarter of a century and it’s being speculated that he has a fair chance of remaining on top after general elections scheduled next year.

Due to its location, not only its northern region—where Nepalis are treated as any other foreigners and routinely denied visitors’ permit—presence of security forces is noticeable even in central Sikkim. The defense forces maintain Hanuman Tok shrine. The Black Cat Commandos guard Rumtek Monastry—the main seat of Karma Kagyu school of Tibetan Buddhism. Churches and mosques appear unguarded. But the heavy presence of crew cut troopers on Pooranmashi Guru Nanak Jayanti in the local Gurudwara showed that religion is taken seriously by the Indian defense forces.

Despite its monolithic appearance, Tibetan Buddhism has four major schools of thought that are recognized by the colors of their silk cap. The Gelugpa are known as the Yellow Hats and the Kagyupa are called the Black Hats. The Nyigma and the Sakya both display similar hues—the Red Hats.

For various historic reasons, the most dominant of all four schools is that of the Gelugpa or the Yellow Hats. His Holiness Dalai Lama is considered to be the temporal and spiritual master of the Gelugpa School that emphasizes the learning of logic and philosophy but he is also the secular head of all Tibetans irrespective of their faith. The second most important seat of authority is given to the Panchem Lama, also of the Yellow Hats. The Panchem Lama is a divine scholar with the religious authority to confirm the incarnation of spiritual master.

Even though not dominant in numerical terms, the Black Hats have immense influence among the believers and its head—the Karmapa—is perceived to be the third most important divine person in Tibetan Buddhism along with the Dalai Lama and the Panchem Lama. Before being defeated by the Fifth Dalai Lama, successive  Karmapas had actually ruled Tibet.

Exiled from their homeland, heads of all the four schools were domiciled in India until quite recently. Rumtek Monastry has been the traditional seat of Karmapa Lama outside of Tibet since the 17th century. Unfortunately, the Karmapa doesn’t preside over the gorgeous Rumtek Monastry anymore. If it weren’t for the picturesque location that draws hordes of tourists, Rumtek would have been a lonely place. And thereby hangs a tale of geopolitical contestations over religious heads.

A Nobel Laureate and messenger of peace, the octogenarian Dalai Lama is a universal symbol of Tibetan resistance. Since being identified as an incarnate in 1995, the Panchem Lama has gone missing. He is believed to be alive and being ‘educated’ by the Chinese. For a while, there were two claimants to the Karmapa title. The Dalai Lama resolved the controversy by conferring his recognition upon the nominee of Beijing. He escaped Tibet and arrived in India, but Indian security agencies continue to believe that the Karmapa is a Chinese spy.

Perhaps tired of being treated shabbily, the Karmapa has been living in the USA for sometime and recently acquired the passport of Commonwealth of Dominica Republic. Now, the Indian government is in a real fix. If it withdraws his identity papers, New Delhi will lose its influence over the third most important figure of Tibetan politics. Denial of visa will erode India’s credibility in the international community. Allowing him to be in Dharmsala will prove that Indian allegations were malicious. The aggressive Doval Doctrine seems to have badly backfired in handling the Tibetan issue.

Taking a longer term view, the soft power of Beijing has triumphed. The Dalai Lama is in two minds about the issue of succession. If the traditional method of reincarnation is followed, recognition of Panchem Lama would be crucial. Apparently, the Chinese are keeping that card close to their heart. Should the decision of senior Lamas be considered appropriate, the Karmapa will be an influential voice. Indians have all but lost him too. Whatever be its shape, the Chinese will be the arbitrators of Tibetans’ fate in the post-Dalai phase.

Unlike Christianity, Islam or different schools of Buddhism, there is no central authority in Hinduism. The influence of Shankaracharyas is limited to the followers of their respective Peeths. The self-styled Swamis and Gurus function more like temporal entrepreneurs than spiritual masters. Due to the hierarchy of caste, every male Brahmin can claim equality of status in a group that is placed higher above all others.

Rigidity of caste system in Hinduism means that Vishwamitra of the Kshetriya lineage could be elevated from Rajrishi (Royal Sage) to Brahmrishi (Universal Sage) only by prostrating himself at the feet of Brahmin-born Rishi Vashistha. Poet Valmiki, in all probability a Dalit and the creator of Sanskrit Ramayana, could be recognized as equal in status to Brahmins due to his learning but never be admitted into the caste. There is no way to be Brahmin other than being born one.

When Keshav Baliram Hedgewar became the first Sarsanghchalak—the supreme authority of the Hindutva organisation  Rashtriya Swayamsevak Sangh styled after monolithic religious orders—it had the ambition of creating a Hindu Nation out of diversities of India. The second Sarsanghchalak M S Golwalkar openly admired Hitler and Mussolini. Created as the parliamentary front of the RSS, the Jan Sangha and its modern avatar Bhartiya Janata Party is committed to using ‘anti-Islam’ as a tool of geopolitics.

Rumors aren’t always true, but it’s said that Prime Minister Narendra Modi has little say in Nepal policy of his government. He merely implements decisions of incumbent Sarsanghchalak Mohan Bhagwat. That could be the reason the Hindutva lobby is getting stronger by the day in Kathmandu as it confronts fears of China that a religious regime in Nepal would be intrinsically inimical to its geopolitical interests in Nepal. The risk of proselytizing Christians is perhaps a ruse to cover secularist versus Hindutva geopolitical contestations between Beijing and New Delhi with windfall benefits accruing to the Western lobby.