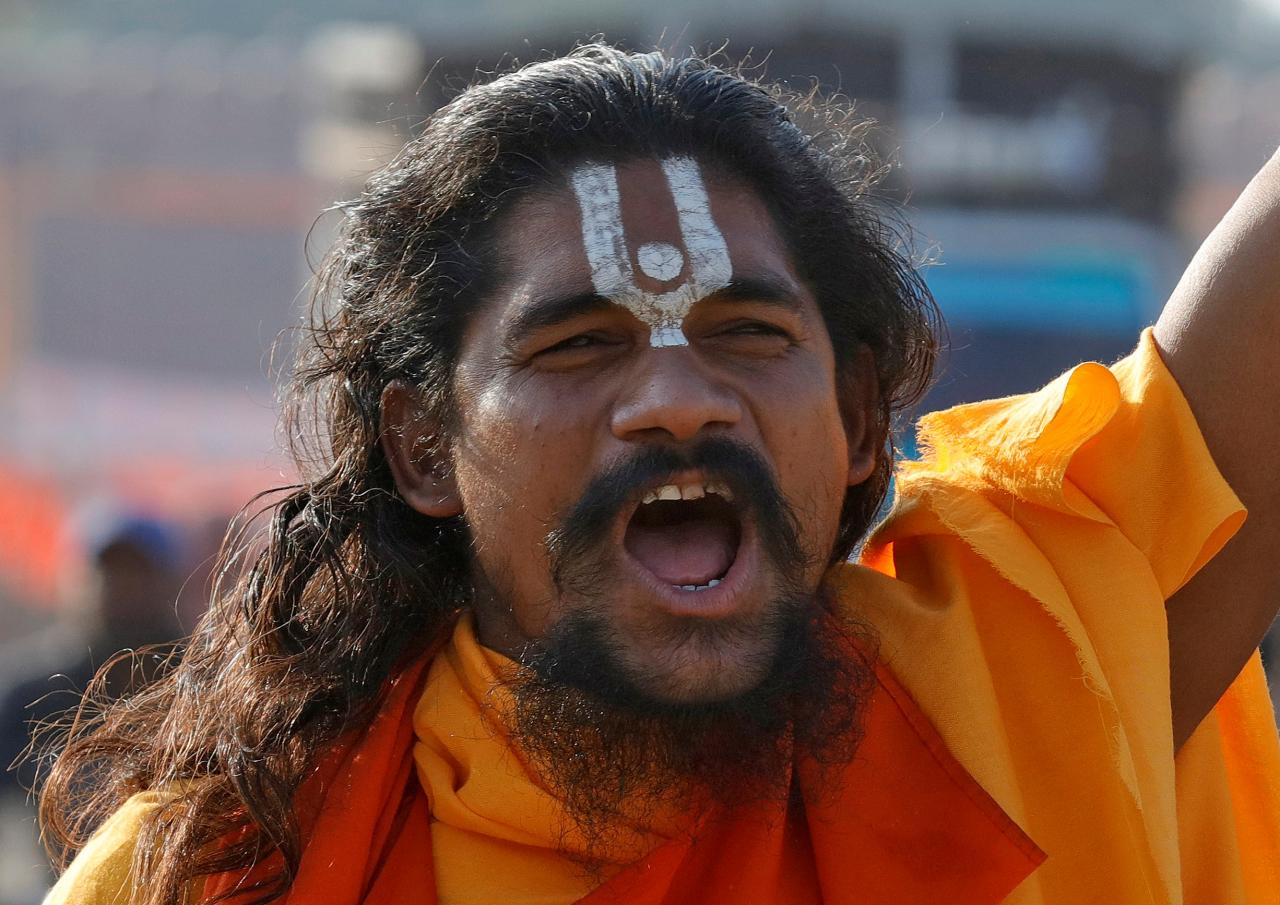 A Sadhu, or a Hindu holyman, shouts slogans at the venue of Sunday's "Dharma Sabha" or a religious congregation being organised by the Vishva Hindu Parishad (VHP), a Hindu nationalist organisation, in Ayodhya, Uttar Pradesh, India, November 24, 2018. REUTERS/Pawan Kumar

AYODHYA, Nov 25: Amid heavy security, tens of thousands of monks and activists from Hindu nationalist groups began converging on the Indian town of Ayodhya on Sunday to demand the construction of a temple on a disputed religious site.

Over 200,000 people are expected near the site where a Hindu mob in 1992 pulled down a 16th-century mosque, sparking deadly religious riots that killed some 2,000 people in one of India’s worst communal violence since the partition in 1947.

More than 900 extra police and a large number of paramilitary, including elite commandos, have been stationed at Ayodhya, said Vivek Tripathi, spokesman for the Uttar Pradesh police. “We’re monitoring the entire town by CCTV and drone cameras,” Tripathi said.

In the run-up to a general election due by May 2019, Prime Minister Narendra Modi’s Bharatiya Janata Party (BJP) and many Hindu outfits affiliated with the BJP have ratcheted up their demand for a new temple at the disputed site which most Hindus believe was the birthplace of warrior-God Lord Ram.

Hindu groups point to evidence there was a temple before a mosque was built by a Muslim ruler in 1528.

“The mosque was a slight on Hindus and it’s a shame that we’ve failed to build a temple on one of the most holy sites for Hindus,” said Sharad Sharma, spokesman for the Vishwa Hindu Parishad (VHP), or the World Hindu Council, which has close ties with the BJP.

Hindus are getting impatient and the time has come to build a grand temple for Lord Ram, Sharma said.

The group gathering on Sunday will urge the government to introduce a legislation to pave the way for a temple, said Bablu Khan, an elected BJP council member in Ayodhya.

Both Hindu and Muslim groups have petitioned India’s Supreme Court to help resolve the issue. The top court has sought more time to give its verdict.

Both the BJP and VHP and their parent movement, the Rashtriya Swayamsevak Sangh, have asked the government to issue an executive order to build a temple and bypass the Supreme Court.

The heavily fortified site, which looks like a small garrison town, is under the control of the Supreme Court.

Sunday’s congregation in Ayodhya would be followed up with bigger gatherings in New Delhi, India’s capital, said Sharma.

The build-up of Hindu religious leaders and right-wing political activists has also raised questions about the safety of Muslims who live in Ayodhya and other nearby areas.

Zafaryab Jilani, a senior member of the All India Muslim Personal Law Board, said it’s incumbent upon the state administration to ensure the safety of the community.

The administration is geared up to protect every single individual in the town, said Anil Pathak, district chief of Faizabad, where the Ayodhya town is located.