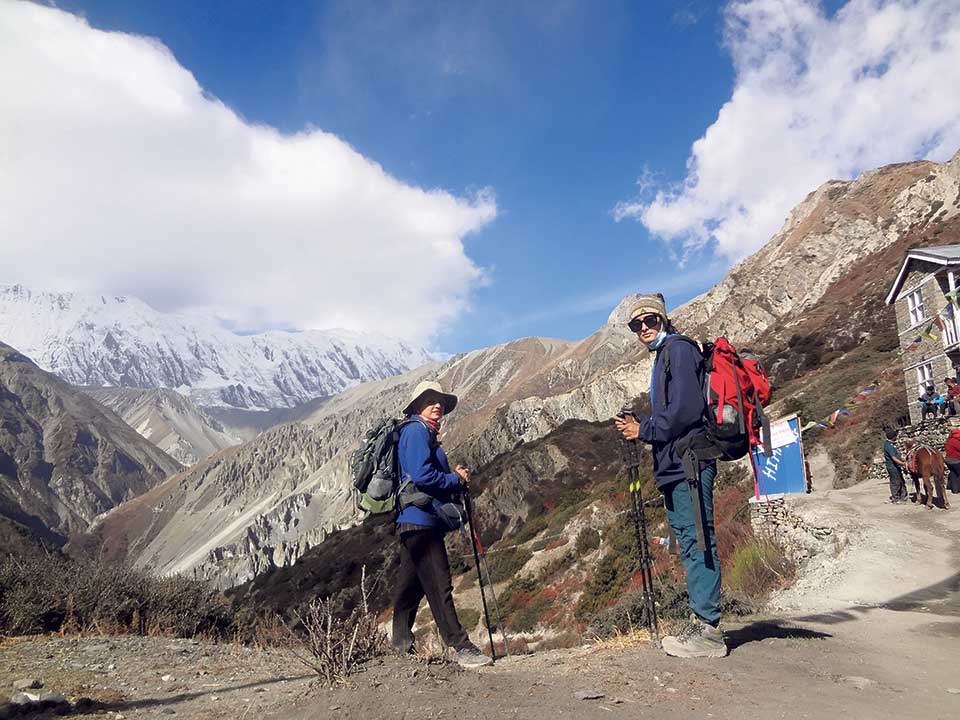 From 1400m to 5416m, this journey has quite an elevation. As I “last-minute” over packed my luggage for my dream trip – the Annapurna Circuit – I had little idea of what was coming next (all in a good way though). We (my family and I) left Kathmandu sometime in mid-October as the best time to walk the circuit is October-November and drove all the way up to Besisahar in Lamjung.

Previously, that was where the trek would start but with vehicles going up to Manang (almost half the distance of the complete circuit) trekking from there has become almost obsolete. On either side of the highway were large fields of golden rye, spread far and wide making me feel like I was in a long-stretched montage of a travel movie with soft acoustic music playing as I looked outside the window with longing for adventure. We were off to a wonderful start.

The next day, we started off fairly easy. The morning was fresh, the roads were pitched, and the hills were green and alive. But then we were greeted by a very young, very angry road that was in no mood of letting anybody pass through it. With Marsyangdi flowing right beside us waiting to engulf anything that falls into it and the road filled with stones and uneven gravel that were adamant on pushing us down, I, a self-proclaimed atheist, found myself praying to God for dear life. Quoting shows like “Rick and Morty” and “Bojack Horseman”- shows that glorify death, I used to claim how life was meaningless and existence is a pain but at that moment I had wanted nothing but to live while our vehicle was struggling to move forward amidst all the mud, dust, and weak gravel.

From Besisahar to Chame, the road is one-of-a-kind. Apparently, the Nepali army built the road cutting through massive rocks and some even lost their lives in the process. It is a road that takes “are we there yet?” to a whole another level. But this shouldn’t deter anyone from embarking on the journey. With a good vehicle and a competent driver, one should be completely safe.

From Chame, the mountains become closer and more beautiful, especially at dawn – the tall hovering mountains covered with pearl-white snow and the river whistling down its path, it’s nature at its best.

On the third day, we finally made it up to Manang. The drive felt much better or maybe it was because I had been through worse. The town of Manang nestles below the staggering hills and mountains of the Annapurna range, modernized by the heavy flow of tourists and it’s a little version of Thamel with its stone-paved roads and its wide array of hipster caps and pashmina.

The hotels in Manang and all hotels up to High Camp have a warm feel to them, with homely wooden panels, a life-saving chimney and, of course, good food like spaghetti, pot pies, potato momos, pancakes, soups, noodles, steaks (yak), and mueslis (I’d recommend food other than Dal-Bhat as you go up as it’s not going be as good as home).

The walking finally started from Manang. As our next stop was Tilicho, we walked up to a lovely village named Sri Kharka. We walked across wonderful gardens of green, red, yellow bushes, climbed up, walked down as the wind swiftly blew across our faces and the mountains remained still and stable. There I had the most wonderful time sun-basking in a glass-room with a warm blanket and Louisa May Alcott’s “Little Women” as mountains like Annapurna II and Gangapurna stood besides me. As the night grew, the cold seeped in, but with warm tea and the heated chimney it wasn’t so bad after all.

Then came Tilicho Base Camp, hidden behind these magnificent hills and steep, stony pathways, it lay silent as we approached it midday. This is where I saw a lot of Nepalis with their flamboyant Nepali-ness – their loudness, familiar behavior making me feel like I was back home in Kathmandu.

At 4:30 am, when the sky was dark and full of stars, we made our way up to Tilicho Lake. With headlamps stuck to our foreheads, warm water in our thermos and walking sticks tight in our grip, we started walking up to what many claimed to be one of the hardest climbs of the trek. And they were not wrong. The road is a mixture of zigzag, slippery stones, and a daunting uphill that has the power to make your entire life flash before your eyes.

Halfway when my legs were cursing me for putting them through this, I was filled with anger towards people like Henry David Thoreau, Chris McCandless, Oscar Wilde for hyping up nature and adventure so much – making nature seem pristine, soft, and warm when it was nothing but cold, stony, and difficult (at that moment anyway). But as we approached the lake (three hours and 15 minutes), I was soothed by the silence of my surrounding. I was alone amidst the mountains, with only the warm rays of sunlight as my companion.

The lake was a magnificent blue. It lay still in the lap of Tilicho Himal that was glowing in the morning sun. The wind was fierce and strong and one could not overstay their welcome at Tilicho Lake because the wind would grow stronger as the day passed. So, the next day, we walked up to Letdar, now familiar with the mountains and the hills, just two days remained before we finally crossed the Thorong La and headed onto Muktinath.

I had the best walk of the trek when we went from Letdar to High Camp (the final camp), not just because I had grown accustomed to the air and the walking but we were closer than ever to the mountains. I was walking along their very foundation, from where they grew to become such staggering figures and the occasional decoration of ‘dhoja-patras’ at places added more beauty to the natural aesthetic.

On the final day, at 4:00 am, we started walking up to Thorong La – the ultimate leg of our journey. The Thorong La pass welcomed us with open arms at around eight in the morning, and we celebrated our victory with a warm cup of tea at a teashop in the pass. We were finally there. I was finally there. The pass was decorated with ‘dhoja-patras’, flags of various nations. It symbolized not just a place but a dream, a hunger for adventure that we so often bury to seek material and social comfort.

Every day of the trek was like an adrenaline rush. The joy of being alive never resonated more than it did when I was walking along the hills and the mountains. The circuit is definitely a walk worth embarking on. 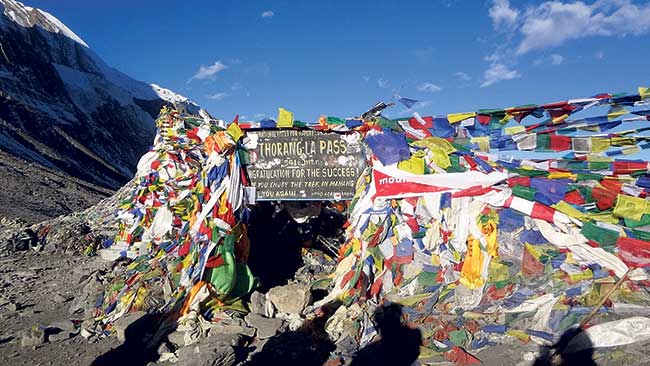 MANANG, Oct 28: Like other tourist destinations of Nepal, the Annapurna foot trail is busy  welcoming a large number of... Read More...