538 people died in 4,657 road accidents in the last three and a half months 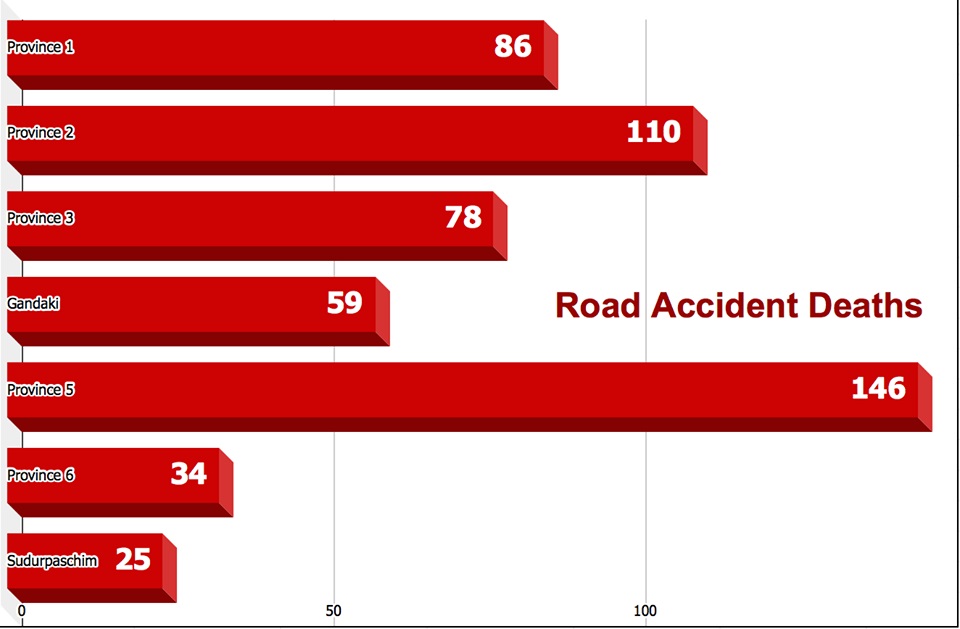 KATHMANDU, Nov 10: Nepal recorded five deaths a day on an average due to road accidents in the first three and a half months of the current fiscal year.

Statistics compiled by the traffic police offices in all seven provinces show that road accidents shot up alarmingly in the given period, with the total number of deaths reaching 538 and the number of those injured to 4,688 in a total of 4,657 road accidents recorded in the period. This means that five persons die a day on an average in 38 road accidents that take place across the country each day.

From mid-July to October end this fiscal year, a total of 86 were killed in Province 1, 100 in Province 2, 78 in Province 3, and 59 in Gandaki Province. Likewise, a total of 146 persons died in Province 5, 34 persons in Karnali Province, and 25 persons in Sudurpaschim Province in the same period. A majority of accidents in the current fiscal year were recorded during Dashain and Tihar festivals, according to the data of traffic police.

The statistics compiled by the Traffic Police Office (TPO), Itahari shows that a total of 30 persons lost lives in 128 road accidents in Ashoj (mid-September to mid-October) in Province 1. According to Inspector Homnath Dahal of TPO Itahari, road accidents increase in the festive season, as a result of over speeding, consumption of alcohol, and overloading, among others. In the current fiscal, 301 persons have been injured in road accidents in Province 1.

Meanwhile, Province 3 has recorded 3,310 road accidents in the current fiscal year. The accidents took the lives of 78 persons, while 2,970 persons sustained injuries. In the course of a month, two deadly accidents occurred in Sindhupalchowk due to over speeding and overloading. “Often road accidents occur due to the carelessness of drivers. Over speeding, overloading, old vehicles, and carelessness are the major reasons behind the increasing road accidents,” according to DSP Madhav Prasad Kafle, spokesperson for the District Police Office, Sindhupalchowk. Kafle further added that road accidents can be reduced by 75 percent if drivers become more careful.

Meanwhile in Province 5, the number of road accidents has not declined despite awareness campaigns conducted by the traffic police. The statistics show a total of two persons die on an average every two days in the province. Likewise, five persons are injured every day. In the last three and a half months of the current fiscal year, 435 road accidents were recorded in the 12 districts of the province. The accidents claimed the lives of 146 persons, and left 555 injured.

Province 5 police, too, say carelessness on the part of drivers is the major reason behind the increasing number of accidents. According to DSP Ram Prakash Shah of Province Traffic Police Office, Butwal, 60 percent of road accidents occurr due to the carelessness of drivers. In April, a Nepali Congress lawmaker died in a road accident in the province. Then, the provincial government had organized several awareness programs to reduce road accidents. Despite efforts from the government and other stakeholders, the number of road accidents in the region has not declined.

Meanwhile, the number of road accidents in Karnali Province is fewer in comparison to other provinces. In the current fiscal year so far, a total of 89 road accidents have been recorded in the province, according to the statistics maintained by the traffic police. In the accidents, 34 persons died, while 136 persons sustained injuries. According to Inspector Meghraj Prasad Chaurasiya of Provincial Traffic Police Office, road accidents can be reduced by 80 percent if the drivers are cautious while driving.

KATHMANDU, Aug 17: Nepal Tourism Board (NTB) is preparing a budget of around Rs 1.5 billion for the current fiscal... Read More...

KATHMANDU, Oct 26: Among a total 876 missing children in the last three months from various parts of the country... Read More...