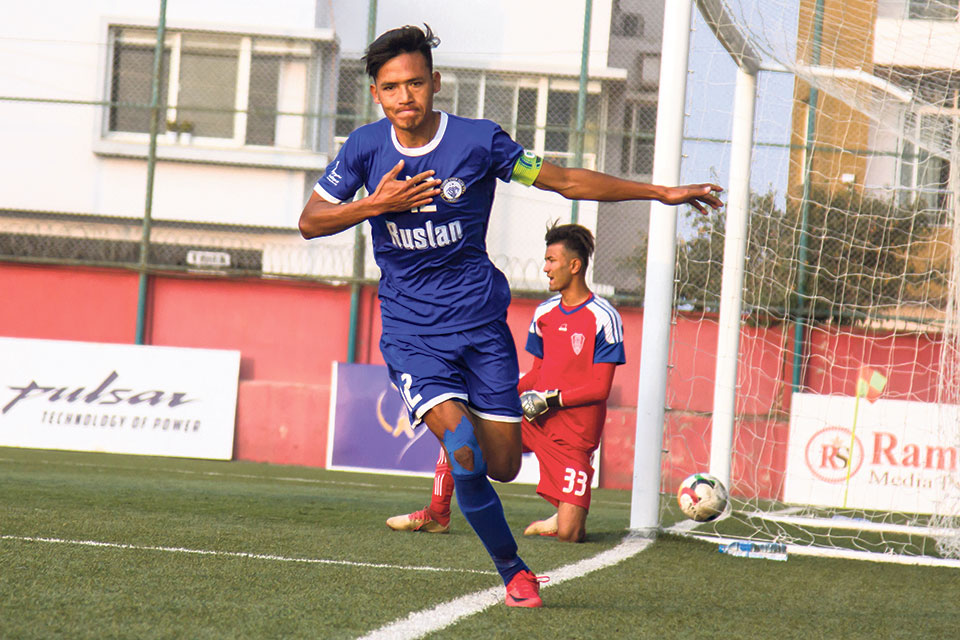 KATHMANDU, Nov 19: Title contender Ruslan Three Star Club has climbed to the top of the table with a 5-1 thrashing of Brigade Boys Club in the Martyr’s Memorial A-Division League in Lalitpur on Sunday.

In its second round match played at the All Nepal Football Association (ANFA) Complex in Satdobato, Three Star added three goals in the last eight minutes, to its 2-1 lead to emerge victorious leapfrogging Signature Manang Marshyangdi Club, who has the same number of points on goal difference.

Goals from Ranjit Dhimal, Sunil Bal, Ranjan Bista, Nirajan Khadka, and captain Bikram Lama set the win for Three Star, who had beaten NIBL Friends Club 2-1 in the first round.

Three Star scored early on in the game after Brigade’s Randip Poudel fouled Nirajan Khadka inside the box in the sixth minute, and a penalty was awarded. Dhimal stepped on to take the kick and slotted the ball comfortably into the bottom right corner to give his team a lead.

The first half was not that convincing from Three Star despite getting most of the chances, but the final ball was missing and the 5-man defense formation of Brigade was solid.

Sunil Bal was the standout player in the game as he ran from the wings and frustrated the Brigade defense with good ball control and pace.

Bal dribbled past three to four defenders on his way, but his short pass from the point blank range could not be guided by Bista into the post and a shot from Ajayi Martins was blocked in the 30th minute. Three Star got another chance in the 42nd minute when Buddha Lama crossed the ball, but Martins header from the same area was wonderfully saved by Brigade stopper Akash Ranabhat.

Likewise, Bal’s cross in the second minute of the first half’s injury time fell into the path of Lama, whose lob shot went over the bar.

Brigade showed an improved performance in the second half as it changed its 5-4-1 formation to 4-4-2 to play attacking football. Substitute Ritik Khadka hit a volleyed shot from outside the box, but Three Star keeper Alan Neupane made a flying save to deny him in the 46th minute. Shishir Lekhi hit a corner, and Khadka’s corner flew over the bar.

Then it was all Three Star again, and Bal again was in the center of things. Bal got a through ball inside the box, and he delightfully placed the ball into the left bottom corner in the 51st minute to double his team’s lead. Three Star looked more dangerous in the game after that and Khadka’s shot from outside the box went over the bar in the 61st minute.

Brigade played passing football just outside the box in which Jaya Gurung passed the ball to Khadka, he gave the ball to Rajan Tiwari. Tiwari quite coolly finished from the right side to pull one back for his side in the 75th minute.

Then it was a start of a horror show for Brigade as it conceded three goals in the space of eight minutes.

Bista snatched the ball from an uncomfortable Poudel in the 84th minute, and scored in a one-versus-one with the keeper, while Khadka wonderfully hit a shot from just outside the box five minutes after that.

Lama then put the icing on the cake in the 92nd minute after Khadka was the first to build a counter attack and passed to Bista, who then put a good ball to the right to Bal. Bal crossed looking for Lama near the post and he headed superbly to score the fifth for Three Star.

Brigade head coach Ujjen Shrestha said he was satisfied with his team despite the big margin defeat.

“Up to 75 minutes it was okay, but all went wrong after that. We focused on at least equalizing after we scored the first goal, but we were hit on counter attack. I am satisfied with my team’s performance, the boys worked very hard,’’ Shrestha said.

Three Star head coach Megh Raj KC said that his side played superbly and a rejuvenated Bikram Lama helped the winning cause.

“It was a good game and the players showed their real talent. The result doesn’t tell the full story, but the possession of the ball surely does," KC said, “Bikram made a comeback after nearly nine months. He is stronger and now plays better than before. He is fielded according to how the team needs him to be. Bikram was more defensive today, but if we need him in another position, he will play there. He can play in two to three positions.’’

Earlier, departmental team Nepal Police Club failed to match its first round performance, and was held 0-0 by a defensively sound Machhindra Football Club. Police had won its earlier game 1-0 against Grand Master Jawalakhel Youth Club, but failed to win this the match it dominated. In response the head coach Ananta Thapa claimed that one cannot win every match in football.

Police was slower than the previous game, and was poor in the final third. It could not finish when it got the chance and allowed Macchindra to attack freely.

Thapa said: “We did not play as expected, but the league is strong and competitive, and you can’t win every match you play. Credit must be given to Machhindra too as they were solid at the back.’’

Machhindra head coach Dhaneshwor Prajapati said: “I am satisfied with today’s result as we stopped a good team from scoring. We created chances, but couldn’t utilize them. We will certainly improve in the next match."