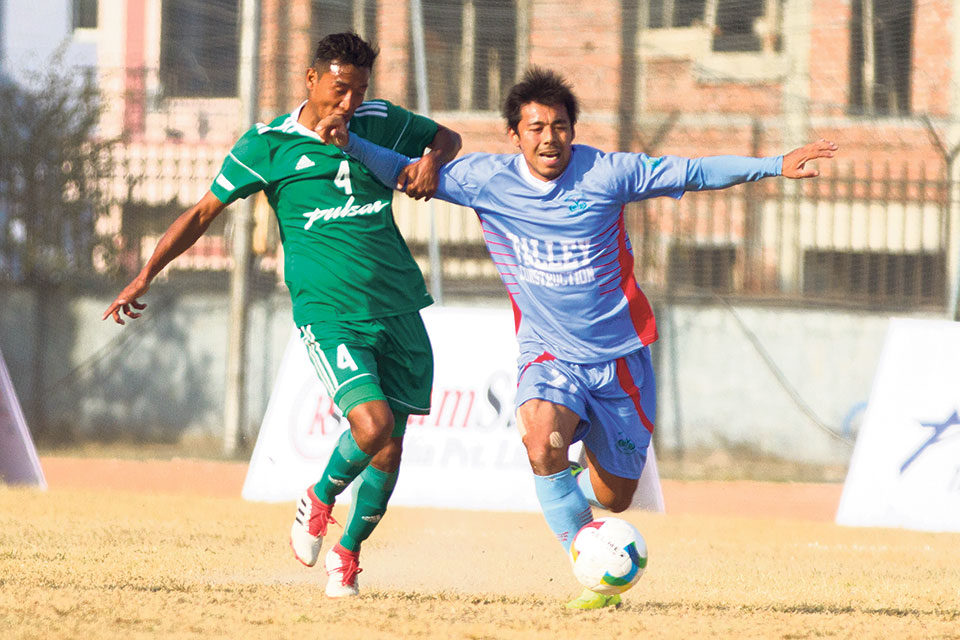 KATHMANDU, Nov 18: Departmental team Tribhuvan Army Club registered its first win of the ongoing Martyr’s Memorial A-Division League with a slender 1-0 victory over Valley Chyasal Youth Club at Halchowk in the capital on Saturday. The match was made more excited as national team player Santosh Shahukhala made his return to domestic league football.

Sahukhala had moved to Japan as the league was not organized for a long time. Sahukhala was signed by Chyasal as soon as he returned to the country and was included by coach Raju Kaji Shakya.

The goal from Army’s Bikash Khawas, the only goal of the game, gave the departmental team its first win of the season as it had shared a point with NRT in a 2-2 draw in the first round.

At the Armed Police Force (APF)’s Halchowk Stadium, Khawas converted the corner of Santosh Tamang in the 27th minute to give Army a lead.

The match between the two teams who had many national team players was exciting. Army created a lot of chances in the game, but could not convert them.

Army was not able to get an early goal as Tamang’s shot from inside the penalty box in the seventh minute hit the side of the bar.

Chyasal got a chance seven minutes after that as Amir Shrestha’s shot from just outside the penalty box was brilliantly saved by Army keeper Bikesh Kuthu. Both the teams converted a lot of chances in the game, but a brilliant header from Khawas guaranteed the win for Army.

National striker Chyasal’s Bimal Gharti Magar made a good move in the 36th minute carrying the ball forward, but it was flagged offside, while Army captain Bharat Khawas beat two defenders and hit a shot in the 40th minute, but it went over the bar.

Chyasal presented an improved performance in the second half, but Army keeper Kuthu saved some chances to deny Chyasal. Kuthu, who saved many chances of Chyasal, was named the man of the match.

Chyasal got a freekick in the 48th minute after Suman Aryal fouled Sanjog Rai, and Sahukhala hit a tricky freekick, but Kuthu saved it. Army got a chance to extend the lead in the 56th and the 63rd minute from Dinesh Hemjun could not score in easy chances.

Chyasal, who played a goalless draw with Machhindra Football Club in the first round, has failed to get a point in this match. Army has registered the first three points of the tournament.

Army head coach Nabin Neupane said that the tactics to win the match was successful. “There was a pressure to win this match after drawing against NRT in the first match. We have become successful to get all important three points," Neupane said, “Even though our defense line was good, the finishing was not up to the mark. We will improve this in the upcoming games."

Chyasal head coach Shakya said that the team who returned after playing the Rhino Gold Cup just two days ago was tired, but the performance was good. “Santosh’s return has made the team good, but some of his chances did not convert into goals. It is a good thing to show this performance against a team like Army."

Goals from Anjan Bista and foreign player Afeez Olawale sealed the win for Manang after it had defeated Brigade Boys Club 3-1 in its first round match before Dashain.

Bista scored the first goal of the match in the 17th minute from the penalty spot. Manang got the penalty after Mashood fouled Bista inside the box.

Manang extended its lead in the 39th minute after Olawale beat three defenders and beat the goalkeeper to score the second.

In the eighth minute, Prakash Budhathoki suffered a hand injury and will be out for two months, said coach Suman Shrestha.

After the win, Manang coach Shrestha said that the team’s aim to win the game by big-margin was not completed because of Budathoki’s injury.

“We had come to the game with the aim to win big, but the team suffered a big loss because of Prakash’s injury. The finishing was not good," coach Shrestha said, “The main problem for our team is the ground. It was very difficult for us as we train in turf, but we had to play in grass today."

NRT head coach Maheshwor Mulmi said that the team could not play well because of lack of preparations.

“We did not have a ground to train, and the provided ground has no good facility. But despite the loss, I am satisfied with the players’ performance," Mulmi said, “We played well against a strong team like Manang. Our team has most of the young players and only 2 to 3 players who have the A-Division League experience."