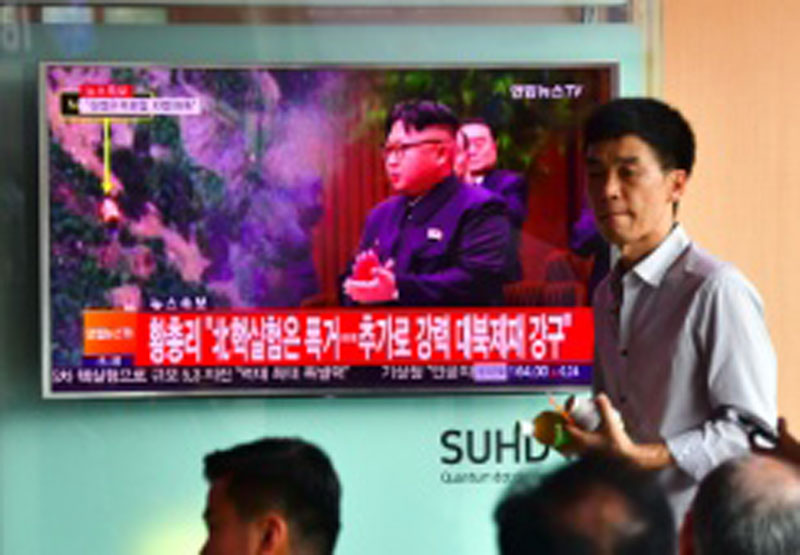 SEOUL, Sept 9: North Korea conducted a fifth nuclear test on Friday, an underground blast it claimed was of a miniaturised warhead.

Here are some key questions around the blast and the isolated state's nuclear programme.

What do we know so far?

South Korea said the quake was caused by a nuclear device, with a yield of 10 kilotons -- the most powerful of Pyongyang's five nuclear tests to date.

Pyongyang hailed the "successful" test of a home-grown nuclear warhead -- a miniaturised device -- and claimed it represented a major step forward in its ability to launch missile-mounted nuclear strikes.

Why have they carried out another test?

The North Korean leadership says a credible nuclear deterrent is critical to the nation's survival, claiming it is under constant threat from an aggressive United States.

Although it has regularly threatened neighbouring South Korea, its main priority is developing a effective strike threat against the US mainland.

It has always insisted it will continue testing, ignoring global condemnation and toughened UN sanctions.

Experts say the tests are likely aimed at refining designs and reliability as well as increasing yield.

Outside monitors will analyse the yield from Friday's test to try and determine whether it signals any breakthrough.

Seoul said the 10-kiloton yield was the "most powerful to date".

The bomb that destroyed Hiroshima had a yield of 15 kilotons, and the most powerful nuclear test ever was a Russian blast in 1961 with an estimated yield of 50,000 kilotons.

Pyongyang claims its January test was of a miniaturised hydrogen bomb, which has the potential to be far more powerful than other nuclear devices.

However, scientists say the six-kiloton yield was far too low for a thermonuclear device.

There was similar scepticism from experts this time around.

"What we can tell from the seismic waves so far is that this is likely not a thermonuclear test," said Jenny Town, managing editor of 38 North, a website focusing North Korea.

"We are still in the preliminary stages but our analysts believe they tested a basic nuclear device not an advanced device."

Was it a miniaturised warhead?

The claim of miniaturisation is a significant worry for the international community, especially in the light of an apparently stepped-up missile testing programme over recent months and years.

If Pyongyang can make a nuclear device small enough to fit on a warhead, and can bolster the range and accuracy of its missiles, it might one day achieve its oft-stated aim of hitting US targets.

Melissa Hanham, a North Korea expert at the Middlebury Institute of International Studies, said it was not possible from seismic data to tell if it was a warhead.

"We would need to see it tested on a missile like China did in the 1960s. Nobody wants to see that. There is no way they could do that test in a safe way, and it could easily start a war."

But, she warned, if the claim turns out to be true "they can threaten not just their neighbours but the US as well. There is no upside to this scenario. No way to sugarcoat it."

How will the international community react?

The test drew swift condemnation from the US and its regional allies South Korea and Japan, as well as calls for yet more sanctions from the United Nations Security Council.

Beijing also condemned the test and called for a resumption of the long-stalled six-party talks aimed at ending Pyongyang's nuclear programme.

Beijing has been North Korea's main diplomatic supporter and protector for decades, shielding its errant ally from harsh international action.

But its patience is running thin. It strongly opposes Pyongyang's nuclear ambitions, which it sees as a source of instability.

China's seeming inability to rein in Kim Jong-Un is increasingly embarrassing for Beijing: the North's latest missile tests this week came as China was hosting a G20 summit.

However, Beijing's problem is that while it wants Pyongyang to stop causing trouble, it is desperate to avoid anything that might imperil the stability of the regime.

Its nightmare scenario is that if the regime collapses, millions of hungry North Koreans might flood over its border -- and Washington-allied South would take over, meaning US troops could be stationed right on the Chinese border.