Realities of life: Raising a child with autism 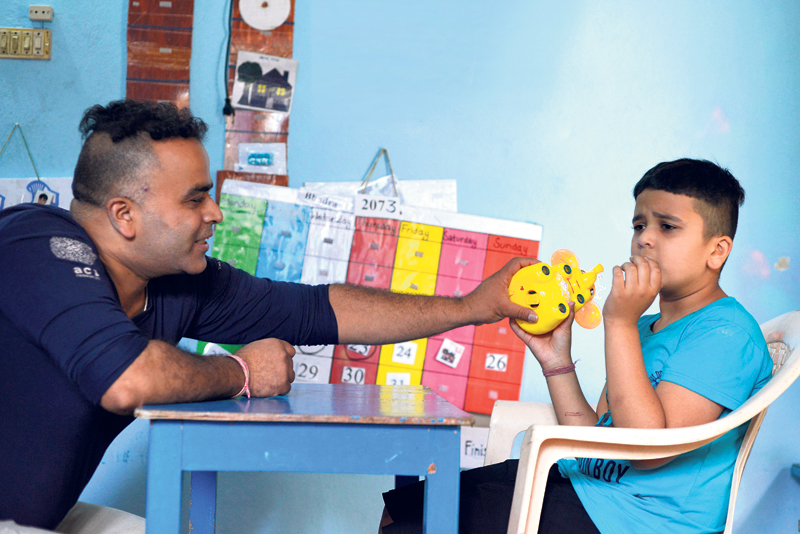 KATHMANDU, Sept 9: The goal was to make seven-year-old, Bibek, use a spoon to feed himself. His mother, Anantika, has been pouring over help guides as well as research materials on the Internet to come up with ideas to accomplish this mission.

She has recently bought new utensils and scheduled various exercise activities for her son. One activity involves Bibek playing with various assortment of different sizes and colors of spoons and cups that she has purchased. She hopes this will help her son become familiar with the utensils. In another exercise, Anantika, plans to give him some play dough and plastic utensils for cutting, scooping, and stabbing it. She has also made it a point to make sure that the spoons and forks have plastic handles so that it will be easy for Bibek to grip it. And lastly, in the coming days, she plans to make a video of her husband eating with a spoon so that she can show it to her son on a regular basis.

Some might think that she is putting in too much effort to teach a simple task such as using a spoon to a seven-year-old but then again, that’s life for a parent who has a child with autism.

Bibek looks like every other child his age. His physical appearance doesn’t offer any clue of his condition, however, his mannerisms and behavior tell us a different story. As those who tend to have Autism Spectrum Disorder (ASD), Bibek too has  severe deficits in social interaction and communication, difficulties in motor coordination and attention as well as a habit of performing abnormal behavior patterns (in his case, rocking side to side).

From what Avantika has read on the Internet and from her consultations with her doctor in Darjeeling, she believes Bibek’s aversion to utensils stems from delays in his development of fine motor skills and eye-hand coordination. With her efforts, she hopes to help him improve on this aspect. However, she hesitates to set any deadline on this mission. Her experience has taught her that any improvement within a month’s timeline is an outstanding progress.

“It’s just that hard,” says Avantika, “ Our children have the capability to learn, understand and perform but the reality is, in majority of the cases, it requires almost quadruple the effort and time. But then again, as a parent, this is a responsibility we have to take. It is our duty to aid them in every possible way.”

These days Autism isn’t exactly an alien term. We have certainly come a long way from the time when many children weren’t even timely diagnosed with autism due to lack of awareness. Today because of various campaigns, at the very least, people have heard of this complex neurobiological disorder. And surely, parents like Avantika are thrilled at this development. However, on the flip side, they aren’t as confident about our society moving on to the next step.

Avantika elaborates, “I don’t think most can ever imagine a parent considering getting her seven-year-old to eat with a spoon a real mission. But that’s what it is for me. I think they will laugh if I tell them the truth which is I have drawn up a routine, spent money, and plan to make videos just to teach my son this basic activity. Knowing about autism is one thing but understanding it is a whole different aspect. So I feel our society at large is still far away from empathizing with autism.”

Parents at Autism Care Nepal (ACN), the only active autism organization in the country have examples of several incidents to back this sentiment. At one point or the other, all their children have been rudely stared at, teased or scolded by strangers. Most of the parents have also been urged to confine their kids to their rooms and homes and save the rest from all the hassle. Apparently, there have also been instances where people have scampered away from their children in fear. They, the parents, have had to deal with such unpleasant encounters one too many times. It’s also the reason why their center, CAN, which mainly holds workshops, classes and day care services for the kids, has also proven to serve as a refuge and a respite for the parents as well.

“The feeling is unanimous. This is the only place where as a parent we aren’t judged for our children’s actions. We all are staggering under the pressure of our responsibilities. But since we are all on the same boat, and most importantly, because we are well aware of the effects autism can have on an individual, everybody understands. We can walk up to the parent whose child smacked our hand or back and laugh about it. There certainly aren’t other places where we feel this way,” shares Sijan Shakya, a parent as well as special educator at ACN.

He also confesses that every now and then a quick scroll through Facebook can still make him sad about all that could have been. Nevertheless, he makes an effort to shake off the feeling and focus on his son. Autism may have given him cognitive and behavioral challenges but it still hasn’t robbed him of a personality. Nepal shares that he particularly adores his son’s energy and love for physical activity. They go on morning walks everyday and with classes at ACN, he is looking forward to teaching his son all that he will need to live an independent life. Nepal says he understands that it is going to be challenging, for instance, it’s been weeks since he began trying to teach his son to dress himself with not much progress but he insists, the point is they are not surrendering to the situation.

“Sometimes, my son spontaneously sits on the roads. Sometimes he shouts in the middle of a public place. Their way of processing information and communicating is very different but in many ways, we too don’t understand our children. Many of their actions and behavior are a mystery to us as well,” explains Kripa Shrestha, also a parent and educator at ACN, “However, we can’t afford to let that hinder us. When our kids behave in unusual ways, there are many who suggest that we leave them at home. But don’t our kids have the right to live outside of the compounds of their house as well?”

So far, the custom in our country has been to not let people with disabilities socialize in public. It’s always been much easier to avoid embarrassing and awkward scenarios than help individuals with these kinds of conditions work on their behaviors, but now some parents are trying to change this mindset.

As the only active autism organization, ACN offers various classes, workshops and trainings to the parents. It requires immense dedication on the parents’ part and they must follow through after the classes are complete as well. It’s basically a big lifestyle change but most of them don’t seem to mind it at all because it concerns their kids.