Sole guardian of six siblings at 16 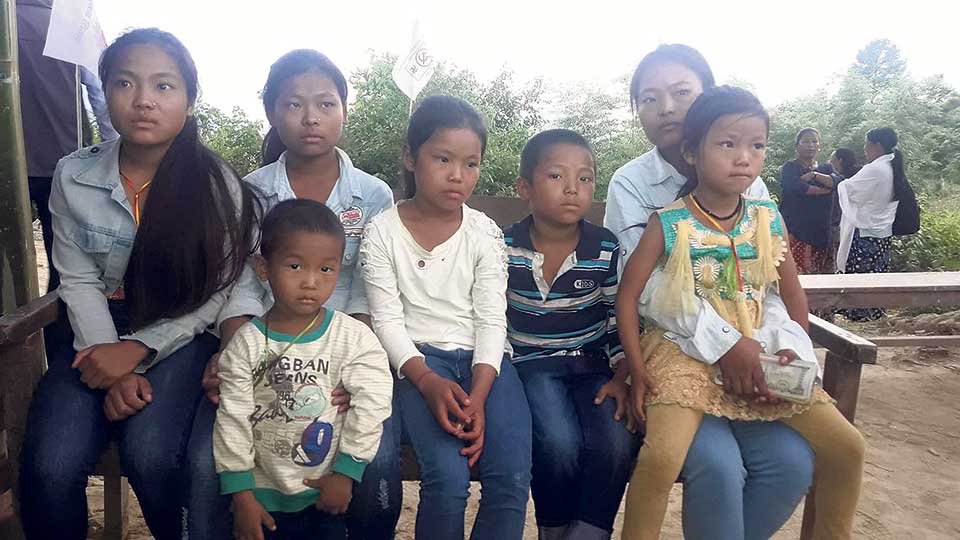 Suima Chamling, 16, (far right) an orphan from Dhitung village of Halesi Tubachung Municipality, Khotang sits along with her six siblings in front of the mayor’s office after receiving donation collected and sent for them by some Nepali workers working in Malaysia and Saudi Arabia in this recent picture. | Photo: Republica

KHOTANG, Nov 6: Since a very young age, she wanted to study and have a successful career.  To make this happen, she was required to have a lot of focus, dedication and hard work. But at the mere age of 16, Suima Chamling has to invest all her efforts and focus to take care of six siblings – four younger sisters and two younger brothers. She is their sole guardian.

Hailing from Dhitung village of Halesi Tubachung Municipality, Khotang, Suima got into this difficult situation after her parents passed away untimely. Her mother Talkumari died on September 4, 2016, and the breadwinner father breathed his last just three months ago.

Her mother died after undergoing an abortion in the district hospital for unwanted pregnancy. Villagers allege that she died of negligence from officers’ negligence at the Diktel Hospital.

But her father Chandra had continued being a pillar of the family through all thick and thin. He was well known throughout the district for being knowledgeable in Chamling language, customs and culture. He was also involved in ward-level politics.

Unfortunately, Chandra too died after receiving an electric shock. It left Suima to take sole responsibility of raising her siblings who are between four and 14 years old. Suima currently studies in grade 12 at Bulapanthe High School, Dhitung. Along with her studies, she also looks after the upbringing of her six siblings all of whom are fully dependent on her. She has to perform household chores and also ensure two times meal every day for the family.

“It is of course very difficult to shoulder the responsibility as a sole guardian of six siblings. I always have to give my best to maintain the family afloat. Life has been very difficult without my mother and father and we feel alone and stranded,” said Suima.

The second eldest among the siblings is Rimabung, 14. She is studying in grade 10. Likewise, another younger sister Mahurbung is 12 years old and studies in grade eight while 10-year-old Ilabung is in sixth grade and six-year-old Niyabung is the first grader.

According to their distant relatives, the orphan children are struggling every day due to their poor financial status. Suima also acknowledged their daily struggle. “It is very difficult to take care of my siblings due to lack of resources. Every day is a struggle,” she said.

Help campaigns for the orphaned children
Negligence of health worker led to the mother’s death while the father died due to electric shock, leaving their seven children to fend for themselves. Luckily, the plights of the seven orphan children have not gone unnoticed. Well-wishers are sending financial aids to the children.

Recently, the family received financial aid of Rs 203,275 from Malaysia and Saudi Arabia, the two countries that are home to tens of thousands of Nepali migrant workers.

The fundraising campaign was initiated by Tayan Singh Rai and Bhagasher Rai of Dhitung, who work in Malaysia. They initiated the campaign in Malaysia and collected Rs 151,740 in financial aid.

“The fundraising campaign to help the family was initiated by our Nepali brothers working abroad. As the children do not have any adult guardian and forced to fend for themselves from a very tender age, their well-wishers came together and collected the money,” said Deputy Mayor Rai.

According to him, the money would ease the family’s livelihood and help them in paying for their education. “It is an effort by our countrymen so that the orphan children can have bright future,” he added.

A few weeks ago, Rai had donated Rs 20,120 form his salary to the family as they have been struggling financially for the past four years. Likewise, Chief of District Coordination Committee (DCC), Khotang, Babi Chamling had also donated Rs 20,000 from his last month’s income to help the family.

DCC Chief has also already declared to adopt one of the children of the family to ease the burden.

Furthermore, an aid committee has been formed in the leadership of Khadendra Rai and they are already running campaigns to collect funds to help the family.

KHOTANG, Oct 28: It was their ancestral occupation. However, the new generations of Sakela village of Khotang gradually lost touch... Read More...

KHOTANG, June 8:   Property worth around Rs 1.5 million was   reduced to ashes as a fire sparked by short circuit... Read More...