Nervy Spurs hang on to win at Wolves 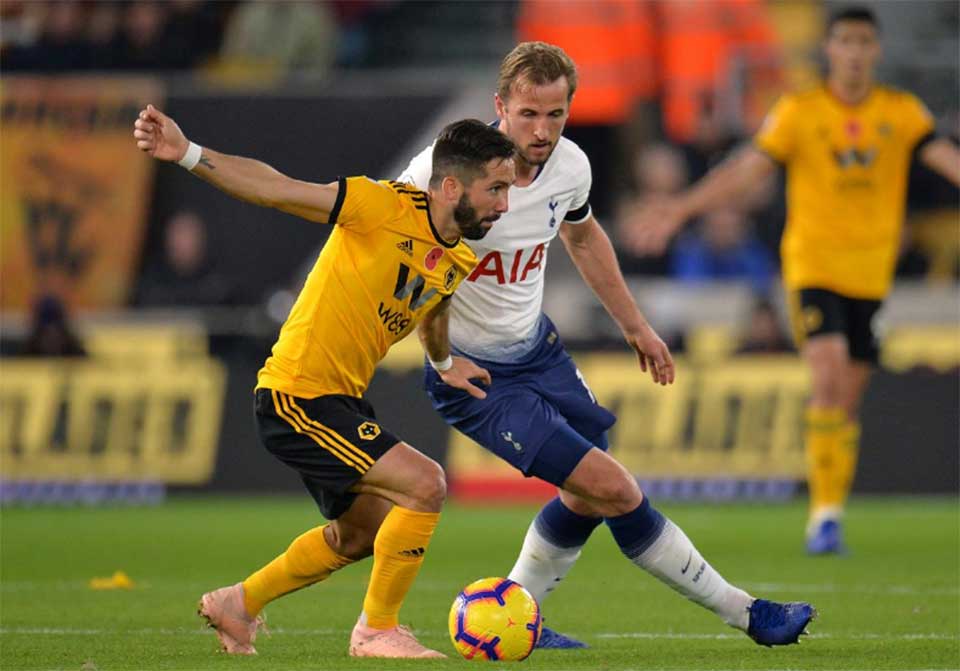 Tottenham Hotspur held on nervously to beat Wolverhampton Wanderers 3-2 away in the Premier League on Saturday after conceding two second-half penalties.

Spurs looked comfortable with a two-goal lead after half an hour. Erik Lamela played a neat one-two with Son Heung-min to charge into the box and score the first and Lucas Moura comfortably headed in from a Kieran Trippier cross.

Wolves had a goal disallowed for offside before halftime, although replays appeared to show that it was an incorrect decision.

Harry Kane finished from close range after the hour mark, following good work by Lamela, but Ruben Neves pulled one back for Wolves from the penalty spot after Spurs defender and Premier League debutant Juan Foyth brought down Raul Jimenez.

Foyth gave away another penalty when he appeared to push Jonny Castro. Jimenez stepped up and sent goalkeeper Hugo Lloris the wrong way to make it 3-2 with 12 minutes remaining.

Wolves piled on the pressure but were unable to find a way past Lloris as Spurs held on to climb back into the top four.

Nuno Espirito Santo’s side have now lost three games in a row and slipped to 11th in the standings and the Portuguese coach lamented that their disallowed goal did not stand.

“It could have made a big difference. It’s hard not to feel a little bit unfairly done by,” he said.

“We had the character to go back in the game when everybody thought the game was lost. The boys gave everything, took risks. We had chances. Maybe we would have deserved a draw,” Nuno added.

Spurs were rocked by an injury to Mousa Dembele in the first few minutes, particularly with one eye on a must-win Champions League clash at home to PSV Eindhoven on Tuesday.

The European fixture may explain why the visitors faded as the match wore on and manager Mauricio Pochettino conceded his side only had themselves to blame for allowing Wolves back into the match.

“At 3-0 I think we conceded a very cheap action for the opponent,” he said. “We created our own problems, but playing here is a tough place to come so I am happy.”

Pochettino said he hoped Dembele’s injury was not too serious but that the Belgian would have to be assessed.

LONDON, Jan 18: Tottenham Hotspur have yet to receive an offer for Christian Eriksen and the playmaker will feature in... Read More...