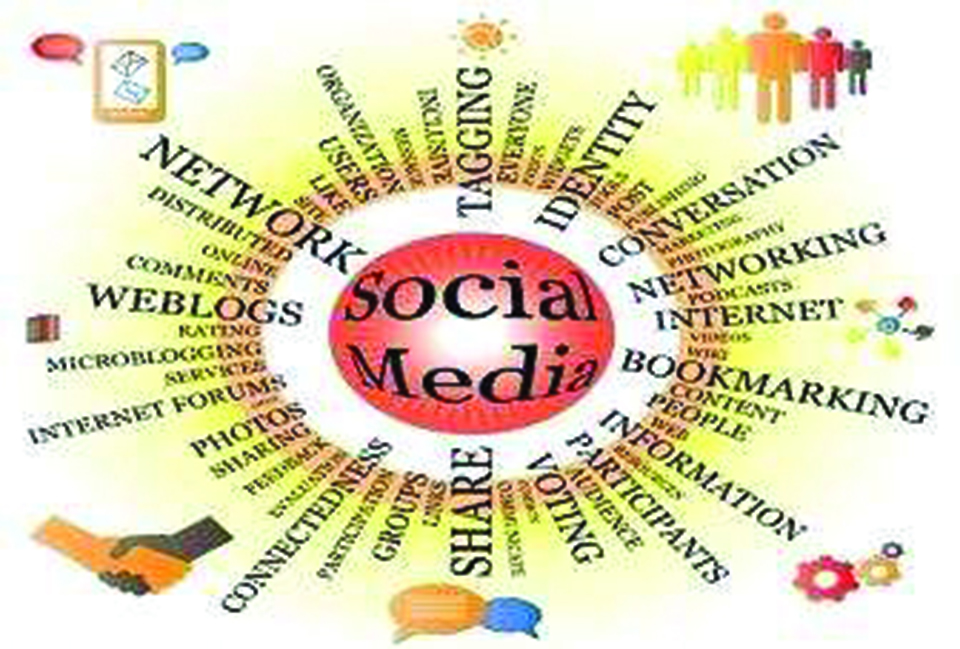 The author currently works at Bank of America
news@myrepublica.com

We live in the world of big data. Each individual spills out data on Facebook, Twitter, Snapchat, Instagram, and YouTube and so on. Facebook was initially a truly social networking site where people could share their feelings and build relationships with people. Social networking sites are now the major source to better understand human nature, relationships and the interactions.

These individuals form a virtual world in which individuals (social atoms), entities (content, sites and interactions (between individuals, between entities, between individuals and entities) coexist. Social norms and human behavior govern this virtual world. By understanding these social norms and models of human behavior and combining them with the observations and measurements of this virtual world, one can systematically analyze and mine social media. Social media mining is the process of representing, analyzing, and extracting meaningful patterns from data in social media, resulting from social interactions.

Communication between people is stored eternally unless the user does not delete them. And sometimes that is not enough. Social media platforms are designed and built upon the concept of networking by commenting, liking and disliking posts. Social media mining covers machine learning, data science, social science, mathematics including statistics and so forth. Based on graph theory, a user is a node, and a relationship is an edge. Such relationship can be directed or undirected.

When a user posts something on Facebook, s/he expresses his/her feelings. An important feature of social media mining is sentiment analysis. How other users react to a post of a user. Facebook has different emojis---anger, love, sadness--on top of the ‘like’ button. These are factor-based data which help identify an individual’s personal traits.

Facebook has over 2.2 billion active users from around the world. A researcher in Papua New Guinea posts a picture of topless Korowai female. That female has the freedom to walk naked and nobody cares there. But if the same female goes to the US and walks naked, what will be the reaction? Two different places, same picture and the same person, but the perception is different.

How can we generalize such context? Dr. Susan Mengel, associate professor of computer science at Texas Tech University, says that data analyst has to present a model with images and another data source on social norms concerning cases like that of Korowai female. Whatever you see on social media might need additional information to come to a conclusion.

Social media mining is useful for counter terrorism. It is also beneficial for market research and analysis. It also shows brand loyalty. Why do people click the ‘like’ button on Facebook page of ‘a newspaper’s Facebook page?’ People want to associate with a brand they like. Moreover, Facebook’s safety check feature helps people inform their loved ones in times of crisis. Earthquakes and accidents are good examples.

People have different mission on social media. Some may go for a long run. Duplicate and fake account users tend to deliver fake information. Knowingly or unknowingly, people share such information. A user has the freedom to share anything; however, there is a limit. They have to follow cyber laws.

The user-generated data are noisy, massive and dynamic. It is challenging to mine such noisy data. A research shows that more than 50 percent  of the tweets are pointless and irritating. It is important to pre-process data for effective data mining by garbage in and garbage out approach.

Police uses social media for surveillance and to mitigate crime. They use keywords like rape, strike, and identify possible source of. Some keywords may not be in English, and they may have to use localization technique to detect such phrase. In the United States, a report shows that 76 percent of police officers use social media to get clues on crime, 72 percent to perceive the public sentiment and 70 percent use for use for intelligence gathering.

Social media is both good and ugly. Its proper use can help connect with people and ideas. Data scattered on social media can be used for different purpose.  A proper mining approach should be used in organizing data in order to get the maximum from social media platforms.

The author currently works at Bank of America