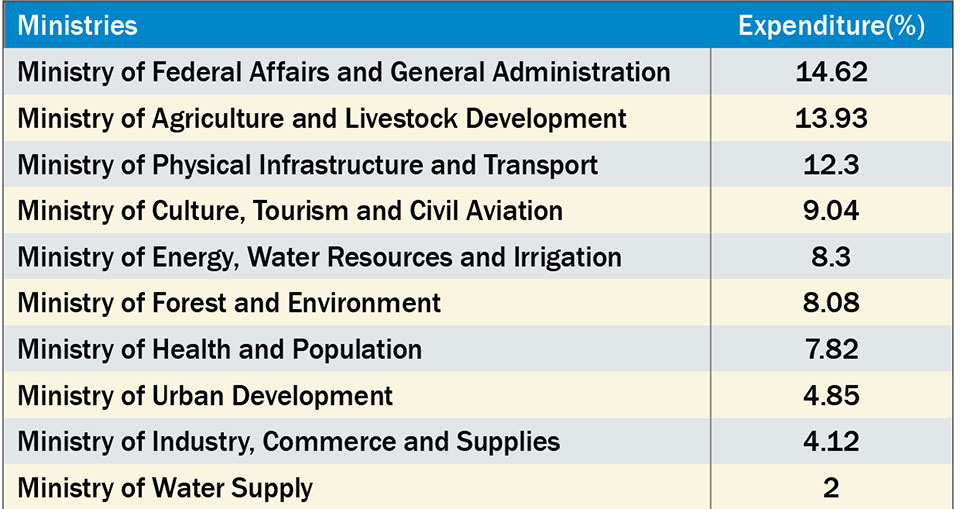 KATHMANDU, Oct 28: Despite its objective of taking the country on the path of economic prosperity, the government has failed to spend its development budget in the first quarter of the current Fiscal Year 2018/19.

There has been not much difference in the pattern of government development spending in the first three months of the fiscal year, compared to corresponding periods of previous years.

According to the Office of Auditor General of Nepal (OAG), 10 ministries who were supposed to spend maximum budget on development projects have spent only minimum budget in the first three months of the current fiscal year.

These ministries have spent only 10 percent of the budget allocated, most of which have been general expenditure.

The government has allocated Rs 426 billion this fiscal year to the 10 ministries including Physical Infrastructure and Transport, Urban Development, Federal Affairs and General Administration, Energy, Water Resources and Irrigation.

Ministry of Physical Infrastructure and Transport has spent the most among the 10 ministries. It has depleted 12.30 percent of total budget till mid-October. Although it has spent more than other ministries, the expenditure is a meager amount of the total budget allocated.

The total expenditure of the ministry in the first three months has been Rs 13.4 billion, of which, Rs 10.2 billion was capital expenditure.

Ministry of Federal Affairs and General Administration comes on the second position of spending development money. Its total expenditure for the first quarter was Rs 10.8 billion, or 14.62 percent, of total budget allocated.

Meanwhile, the Ministry of Agriculture and Livestock Development has spent only Rs 5.35 billion, or 13.93 percent, of the total budget allocated. It has spent Rs 120 million on capital and the rest is general expenses.

According to the statistics, Rs 470 million is the first quarterly expenditure of the Tourism Ministry while Rs 4.67 billion is the expense of the Ministry of Energy, Water Resources and Irrigation.

Meanwhile, the Ministry of Forest has spent Rs 1.34 billion and the Health Ministry has spent Rs 4.41 billion. The total budget for these two ministries is Rs 16.58 billion and Rs 56.41 billion respectively.
Water supply ministry spends lowest budget in first quarter
The Ministry of Water Supply has mobilized the lowest amount of the total budget in the first quarter of the current fiscal year. The ministry has been allotted Rs 24.5 billion this year. But it has spent only Rs 480 million so far, of which Rs 210 million is in capital expenditure.

The disappointing expenditure figures come in the face of repeated directions from the Ministry of Finance to increase capital expenditure. According to the OAG, a total of Rs 22.59 billion, which is 7.19 percent of the total budget, was mobilized in the first quarter of the current fiscal year for expenditure on capital.

The total budget on development is Rs 313 billion. Even the high officials of the Finance Ministry accept that the government generally fails to spend the expected budget in the first quarter.

Economists have said that low expenditure on development might affect the government’s target of achieving economic prosperity. They have underscored the need for maximum capital expenditure right from the beginning of the fiscal year to achieve high economic growth rate.