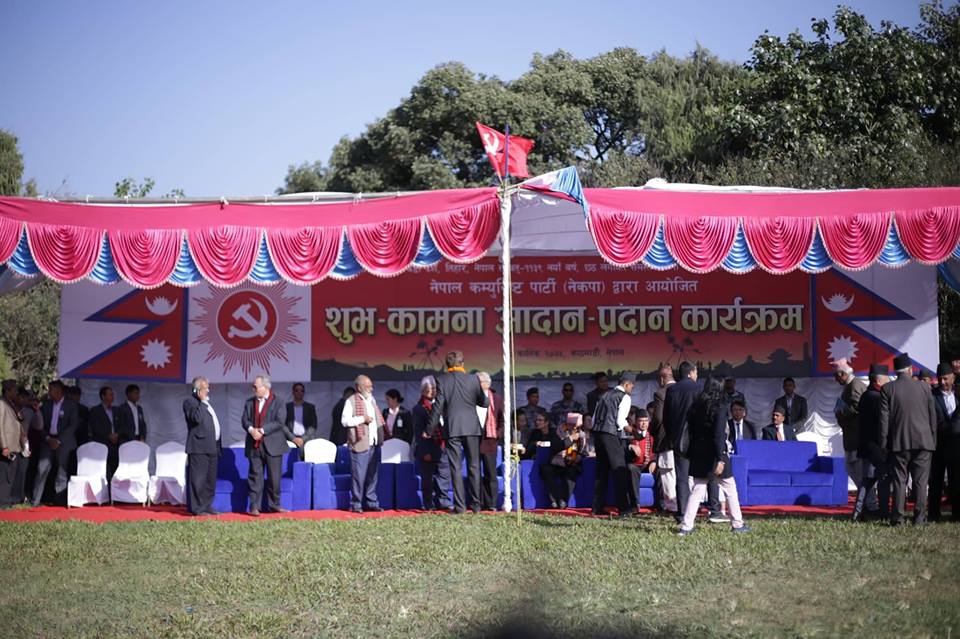 KATHMANDU, Oct 28: Maya Devi Bhusal, 65, a resident of Gulmi, had already waited in queue for more than an hour to enter the venue of the tea reception hosted by the ruling Nepal Communist Party (NCP) on Saturday. Yet, the serpentine line in front of her didn't seem to move forward.

Even though she was optimistic that the queue would move swiftly, she knew that it would take her yet another hour to enter the reception venue and half an hour more to exchange greetings with some of the top-notch party leaders.

“I showed belief in the party and voted for it in the election,” she said, “This is how they are repaying our trust. There is not even a separate queue for us elderly people.” By 2 pm, the queue which started from the front gate of the program venue at Bhrikutimandap had reached Padmodaya Secondary School and Bhusal was somewhere in the middle.

The invitees of the public function were already growing angry by the 'mismanagement'. What fueled the anger of the simple-minded party well-wishers in the queue was the cutting in line by others.

Eight-year-old Riwanshi Poudel from Koteshwar was waiting in the queue with a simple target- to meet the NCP Chairman Pushpa Kamal Dahal. But after waiting for more than half an hour behind the slowpoke queue, she was already turning frustrated. Her father Raju Poudel had by then given up the hope that he or his daughter were going to get the chance to enter the function venue.

“The line in front of us is humongous, we are already turning frustrated by the people cutting in line in front of us,” he said, “We will probably return now.” Poudel also poured in his dissatisfaction over the volunteers mobilized for the function, claiming that they were letting the people they knew to cut in line.

The tea reception hosted by the ruling party which ended at 5 pm saw thousands of attendees including various dignitaries such as president of Nepali Congress (NC), Sher Bahadur Deuba, chiefs of security agencies, senior bureaucrats, ambassadors, and some renowned businessmen.

While talking to journalists, NC President Deuba insisted on unity among the ruling and opposition parties for the prosperity of the country.

Meanwhile, cadres of the ruling party clashed with an anti-tea party group after the group chanted slogans against the party. They chased the disgruntled group later.

Rs 3 million spent on snacksIt has been estimated that about Rs 3 million was spent on the five food items served to those attending the function. According to Arpan Banquet, the eatery that catered the food for the event, a total of 30,000 sets of five itemed snacks consisting of Nimki, Laddu, Kachauri, banana, and tea, were served at the event. The NCP bought the ingredients for the food and the eatery was only given the responsibility to prepare and serve it.

“A set of the five snack items would cost Rs 140 in retail and about Rs 100 if such a quantity were to be cooked,” Rabindra Humagain, a representative of the eatery told Republica, “So, in total, about Rs 3 million was spent on snacks.”

KATHMANDU, Oct 16: Prime Minister KP Sharma Oli has said that Nepal has made its new way towards development and prosperity... Read More...

KATHMANDU, Sept 29: Ruling Nepal Communist Party (NCP) will be hosting a tea reception in Kathmandu on October 16 on... Read More...