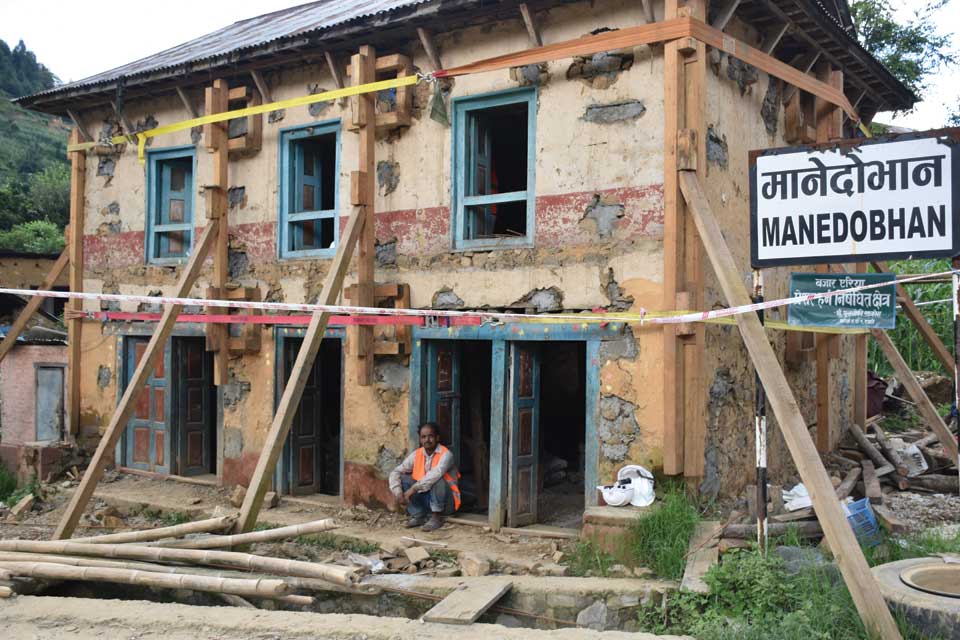 The house of Maya Lama of Panauti-1 before and after retrofitting. Photo: Madhusudan Guragain/Republica

BANEPA, Oct 28: The family of Maya Lama of Panauti-1, Manedovan has spent four monsoons and three winters under the tents since the catastrophic earthquake of 2015 damaged their house. Fortunately, they will be able to spend their fourth winter in their old house.

"We were unaware that we could repair our old home without breaking it," said Maya, adding, "Engineers observed our house and helped us make the house earthquake-resistant." Following an agreement with the National Reconstruction Authority (NRA), UN Office for Project Services (UNOPS) repaired Maya's house through retrofitting.

Expressing her happiness, Maya said, "We provided them the construction materials. They themselves brought the workers and in no time built a new house without breaking the old one." The total cost of the retrofitting was   Rs 400,000. The government will provide Rs 100,000.

According to her, the retrofitting was more effective and economical than building a new house. Though NRA introduced this method long ago, this had not been applied to houses made of mud and stone in lack of research.

Initially, people disapproved the method fearing their safety, says Bibek Bhandari, engineer and team leader of UNOPS, Kavre.  "First, we retrofitted a house   in a Majhi community of Eklephant, Sindhupalchowk for demonstration. That proved that it is possible to apply this method in the mud-made houses of rural parts," said Bhandari.

NRA has planned to 'repair' 1,000 houses from 32 districts (14 most affected and 18 less affected) through this method. As per the agreement, 15 houses in three different places of Kavre will be retrofitted.

According to Er Bhandari, it is important to estimate the vulnerability of the houses before adopting this method. "The situation of the roof, floor and foundation is observed and then it is decided whether it will be better to retrofit or rebuild the house," Bhandari added.

Mentioning that the price of construction materials has skyrocketed in recent days, Bhandari argues that retrofitting can be more economic than reconstruction. "As per the current value, it costs Rs 700,000 to 800,000 to construct a two room house with Reinforced Concrete Construction (RCC) method," said Bhandari, adding, "But through retrofitting, a house can be prepared with a budget of less than Rs 500,000."

According to the latest integrated work plan introduced by NRA, quake victims can get up to Rs 300,000 of subsidized loan for reconstruction. For that, they will have to keep their under construction house as a collateral. They can clear the loan within five years.