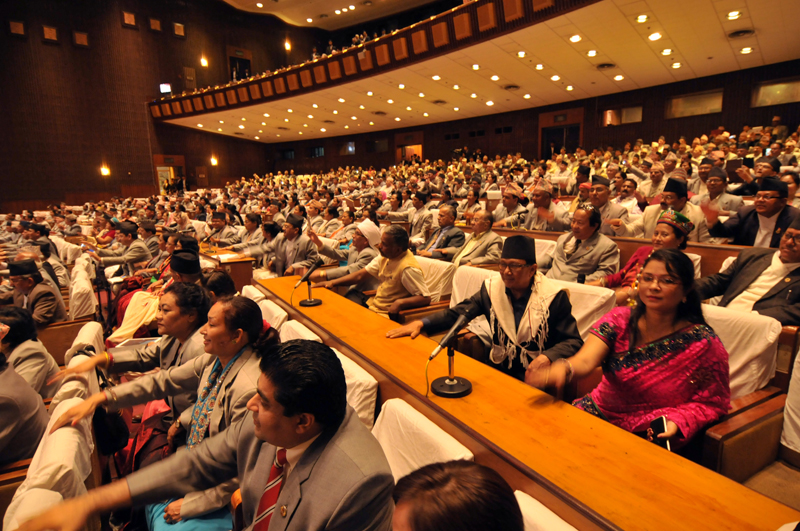 Democracy finds itself in the soup once again in a population with over 70 percent literacy and high political consciousness
Nepal is a goldmine for the strange. At a time when the vast majority of the people were illiterate (with literacy ranging between 5 to 10 percent) back in the fifties, democracy looked workable. Around 75 percent of the parliamentary seats in the first-ever democratic elections were bagged by Nepali Congress headed by BP Koirala.

The democratic practice in Nepal, formalized in the Westminster system, and framed by no less than a British expert, Sir Ivor Jenning, worked reasonably well back in 1959. It is a different matter that the then constitution was scrapped under an emergency power vested on the king by the same statute. But it was not that the democratic set-up was at fault. Instead it was a matter of a head-on clash between two ambitious and equally powerful personalities, King Mahendra and Koirala, as a result of which the democratic experiment was nipped in the bud.

But almost 60 years hence, democracy finds itself in the soup once again, ironically, in a population with over 70 percent literacy and a high level of political consciousness. A constitution, written and proclaimed by a thumping majority of a popularly elected Constituent Assembly, should have, as was widely claimed, had a smooth sailing, as it was technically and legally perfect. But believe it or not, the same constitution invited a situation where the very existence of the country was threatened. Is it not strange that a popularly endorsed statute posed a threat to national independence by releasing a wave of political instability, internal dissent and insoluble conflicts? To be precise, a foreign power played a dominant role in this development. But how was the country all those years ago?

Despite lack of administrative control, transportation and communication network over the entire country, all of which exist today, the state of Nepal appeared strong and integrated some six decades ago. But with the old institution of monarchy now gone, making way for a republican head, and a modern, well-trained and educated civil service as well as other state paraphernalia, the state is deprived of a strong institution that could keep the country from falling apart. The only institution left united is Nepal Army, which has shown some semblance of alertness on national independence. But it has largely kept itself away from running the country.

When a strong monarchy was abolished in 2008 people had anticipated that it would then be replaced by a strong president. But the president, the nominal head of the state, which we now have, is again strangely bereft of any worthwhile power by what is touted as a republican constitution, apparently the best in the world. With political instability setting in, which is also increasingly reflected in the civil service, there has been an unanticipated rise of another state institution, one that was instituted to control corruption.

All government branches (barring the army) are feeling the pinch at how this agency is penetrating administrative decision-making under the pretext of corruption control. But the hard reality is that the state demands some strong state institutions, notwithstanding the controversy surrounding the anti-graft agency. When political command weakens, anti-democratic elements are invariably strengthened, enfeebling the state in the process.

Our newfangled parliamentary system is not only failing to deliver but also failing to function. In comparison, no systemic defects were detected in 1959, when bills could effectively sail through the national legislature. But coming to 2016, in fact starting with the 1990 political change, our law-makers have become frivolous, self-serving and consequently least productive. There are more disruptions than discussions, more closures than functioning and more yawning than awakening in our national legislature.
Call it a parliamentary system, but is this really how a parliamentary system functions?

A government in a democracy is formed on the basis of the numerical count in the legislature. It means it carries the support of the majority of the house. So it is in Nepal.

But what we get to see is that decisions are being made and imposed by a minority. The constitution itself was endorsed by an overwhelming majority but it was readied by a syndicate of a few leaders of a few parties. No sooner than it was declared, amendments were rushed in to accommodate the minority. In fact, the minority has practically dictated terms, but it is still dissatisfied. The constitution is in doldrums not because it lacks support but because a minor group continues to remain dissatisfied. There is a majority rule in all democracies, but apparently not so in Nepal, where we see that the minority is more assertive.

We witnessed the biggest mockery of democracy when the principle of secularism was enshrined in the new constitution. In the popular feedback process on the draft constitution, there was an overwhelming support for a Hindu State, and against secularism. But the fathers of the constitution defied public opinion and, in the process, invited economic blockade and people’s untold misery.

The author is a veteran political commentator

Nepali national psyche seems to be deceitfully democratic. Many hide behind façade of freedom ... Read More...