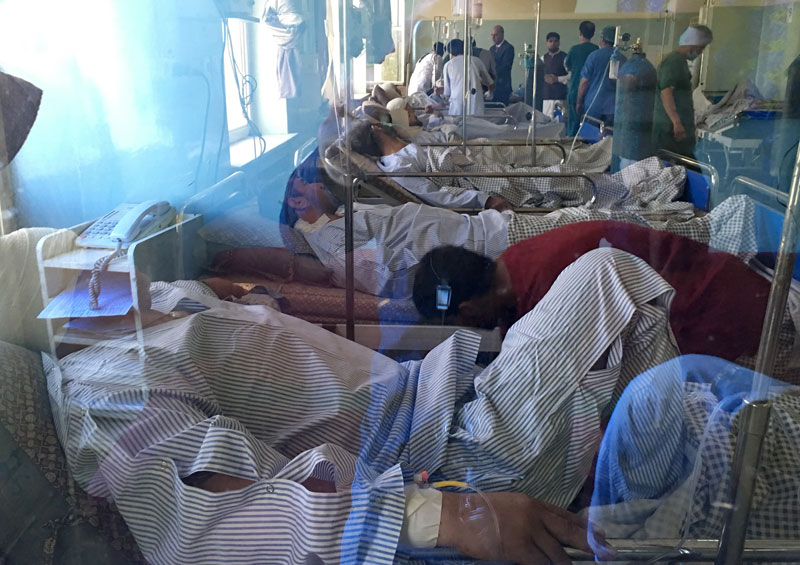 At least 12 Nepalis were killed and another five were injured in a suicide bomb attack by Taliban in war-stricken Afghanistan’s capital Kabul early Monday morning. Initial reports say that the Nepalis killed and injured in the attack were working as security guards for the Canadian Embassy in Kabul. The minibus they were travelling in to reach the embassy was attacked at 5:40 am (Afghan time), minutes after it came out of the camp they were living in.

It’s time to mourn the deaths and wish for the speedy recovery of the injured. However, it’s also the time to ask a few simple questions: Why are Nepalis being allowed to work in countries like Afghanistan and Iraq which are unsafe for anybody and everybody? What has the government done to prevent Nepalis from going to these countries and work there risking their lives?

Government officials say that the government allows only those Nepali migrant workers who will work as security guards, especially for UN and diplomatic missions, to go to Afghanistan and that Nepalis going there for other jobs are not allowed to go. They further argue that even those Nepalis aspiring to work as security guards in Afghanistan are allowed to go to only the “green zones” or in other words, areas that are safer from such attacks. This policy of the government is not satisfactory at all, to say the least.

According to our government, Kabul lies in the so-called “green zone!”

Afghanistan is a country where blasts or gunfights occur almost on a daily basis. Almost everybody in Nepal, the government included, knows that even suicide attacks are quite common there. In fact, such attacks, as illustrated by today’s bombing, have become the norm there. Today’s attack was the first attack in Kabul since the start of the holy fasting month of Ramadan two weeks ago. The last attack in the Afghan capital on 19 April left 64 dead and more than 340 wounded.

Almost all such attacks in Afghanistan are carried out by the Taliban, who have been waging an insurgency against the Western-backed Kabul government since they were ousted from power by a US-led invasion in late 2001. If the past 15 years are anything to go by, it would be wise to expect such attacks in the future as well. Because what the West calls terrorism is in fact patriotism for the brainwashed Taliban fighters. So, the conflict there is unlikely to come to an end anytime soon.

That leaves the choice with the Nepal government. According to reports, most of the Nepalis working as security guards in Afghanistan are former soldiers or security personnel. So, the argument that they are familiar with war-like situations and are ready to risk their lives may hold true. But this argument doesn’t mean that the government can shy away from its responsibility of preventing its citizens from going to countries like Afghanistan which have death traps lying in wait for anyone, anywhere and anytime.

In short, the message from today’s Kabul attack is loud and clear: Stop sending Nepalis there under any pretext. There are manpower companies in Nepal that are supplying security guards to foreign private companies which are stationing them at UN and diplomatic missions in war-stricken countries. The government should, without any delay, ask these companies to stop doing that or face action. Besides, the government should also launch awareness campaigns in the country that countries like Afghanistan are unsafe for any kind of job. Similarly, it should make arrangements for the safe return of those Nepalis who are already there.

Let’s hope everybody has learnt the lesson from today’s suicide attack.

KATHMANDU, May 31: Five Nepali migrant workers were injured in a suicide bomb attack in Kabul that occurred on Wednesday,... Read More...