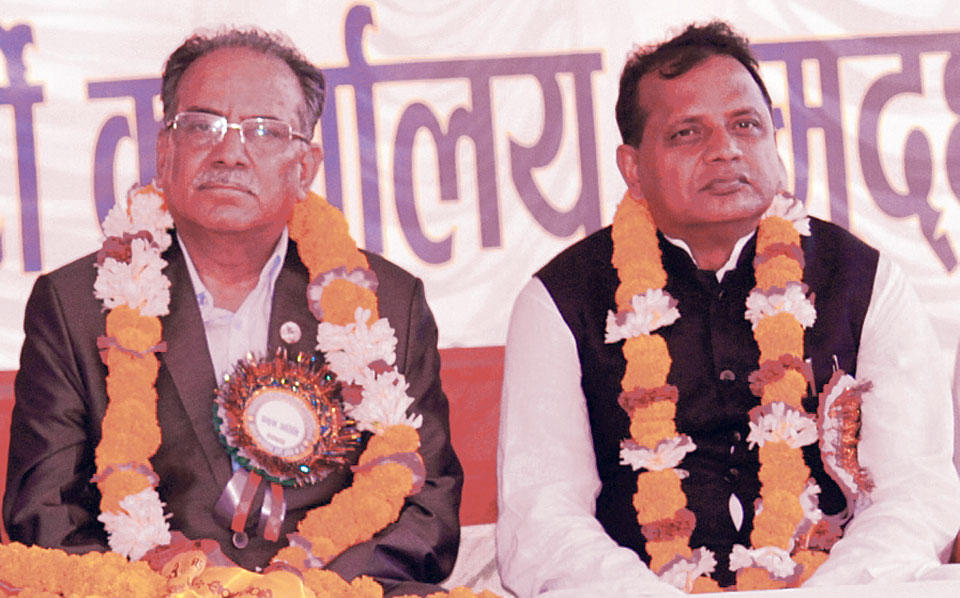 JANAKPURDHAM, Oct 24: Expressing dissatisfaction over the Provincial 2 government's move to recruit a police force of its own, Nepal Communist Party Chairman Pushpa Kamal Dahal has asked the chief minister of the province stop such 'overtaking'.

“Don't go about misinterpreting the constitution which clearly states that the provincial governments shall introduce their laws on public service and the police only after the federal government promulgates its own laws concerning these matters,” said Dahal.

The former prime minister was addressing a function organized for exchanging greetings on the occasion of a series of festivals. “Don't preempt the federal government. Otherwise, you will be plunged into an accident.”

Province 2 has endorsed a police act for recruiting police personnel on its own. Stating that the decision has already captured the attention of the political classes in Kathmandu, Dahal expressed concern over these developments.

“You should make sure to act in a coordinated fashion. Federalism itself will be in peril if you attempt to preempt the federal government. So, cease and desist,” said Dahal.

The ruling party leader, however, also pledged to take up the issue with the federal government.

At the function, Province 2 Chief Minister Lalbabu Raut sought the help of federal ministers including Education, Science and Technology Minister Giriraj Mani Pokharel and Physical Infrastructure and Transport Minister Raghubir Mahaseth to resolve matters in favor of the provincial government.

“Province 2 needs at least 5,000 civil servants to administer the budget and operate development projects, whereas we have hardly 250 civil servants now. But the federal government is not paying much attention to this,” said Raut. “I will introduce a contract law and recruit the required civil servants within a month if the problem persists,” he added.

Raut also threatened of start recruitment a provincial police force if the federal government does not promulgate a federal police act within three months.

While Dahal and Raut traded accusations, NCP General Secretary Bishnu Poudel suggested the rival sides resolve the issue through dialogue instead of engaging in a war of words. “This is not a time for clashes. Both the federal and provincial governments should work in a coordinated manner moving forward,” said Poudel.

Arguing that the constitution has already set out the powers and responsibilities of the local, provincial and federal governments, General Secretary Poudel suggested the province chief focus on develop projects rather than crossing swords with the federal government over unresolved issues.

He hoped the problem would be laid to rest after the federal government comes up with federal public service and police laws as envisioned in the constitution. Once those laws are in place the provincial governments can decide the rest on their own, said Poudel.

“Focus on the development agenda and the party will support you to the full,” he said.

In another context, NCP Chairman Dahal said he is holding discussions with Prime Minister KP Sharma Oli and Federal Socialist Forum Nepal leader Upendra Yadav on amending the constitution with a view to addressing the constitutional issues raised by Madhes-based parties. “I struggled hard for establishing an empowered Madhes. Efforts are underway to amend the constitution and develop Madhes as a prosperous province,” he said .

He also stressed the need for timely completion of the Sunkoshi-Kamala Diversion to modernize agriculture in the southern plains.

JANAKPURDHAM, Oct 7: Chief Minister of Province No. 2 Lalbabu Raut has said that budget implementation and operation of the public... Read More...