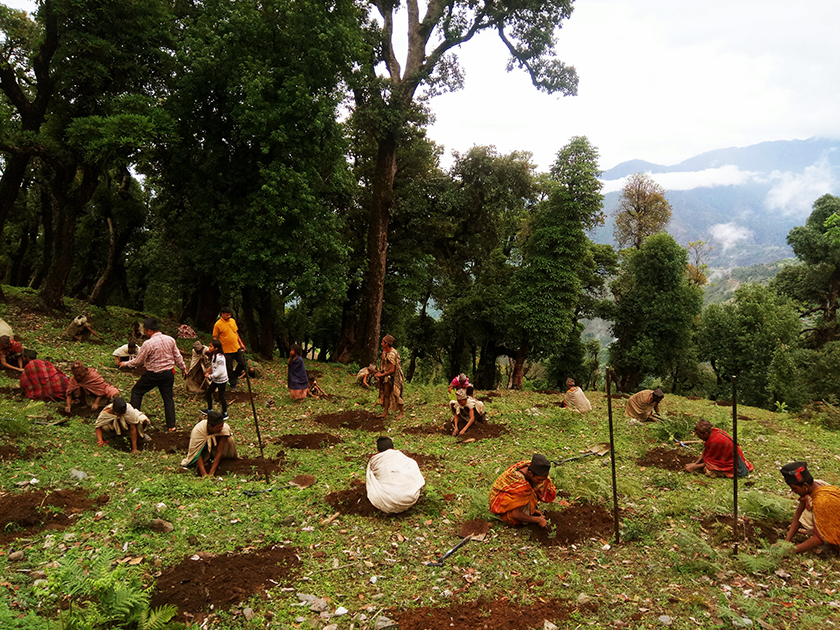 People of indigenous Raute community, who have been employed under the Prime Minister Employment Program, planting trees in Dailekh in this recent photo.

SURKHET, July 7: Raute leader Surya Narayan had never imagined that he will one day work for money. The people of the endangered Raute community have neither been to school nor have engaged themselves in agricultural activities so far. However, they have been lately employed under the Prime Minister Employment Program (PMEP).

These days, doing labor is not an option but an obligation for the people of this last indigenous tribe. Karkat Sankranti which is celebrated on July 16 is the second biggest festival for the last nomadic tribe of Nepal. They receive a monthly allowance of Rs 2,000 each from the government. However, that is not enough for them to manage their expenses.

Earlier, they earned their living by selling wooden utensils; however, they have given up their ancestral profession these days. They were obliged to give up their ancestral profession as people stopped buying their products. "The allowance is not enough for our survival as we don't have any other profession," said leader Shahi, adding, "It's not by by choice but due to obligation that we decided to take up this employment opportunity."

As part of PMEP, Gurans Rural Municipality of Dailekh has deployed Rautes for community afforestation and construction of roads. The local unit had to struggle a lot in the beginning to convince these people to work. "It took us a week to convince them to join this program," said Khemraj Oli, chairperson of Gurans.

A total of 52 people from the Raute community have participated in the PMEP. Each of them will be provided with Rs 517 per day. "They will be employed only for nine days as the programs started quite late," said Mohan Paudel, Coordinator of the program which started on July 3 and will conclude on July 11.

The local unit had sanctioned Rs 250,000 for the PMEP. The participation of Rautes has made this program effective in this local unit. "We have been successful in convincing a nomadic tribe to work," said Chairperson Oli, adding," Their hard work and dedication has made us feel that they deserve such opportunities." He assured to create such opportunities for them even in the future.

KATHMANDU, Feb 12: The government is all set to commence the Prime Minister Employment Program (PMEP) on Wednesday. ... Read More...