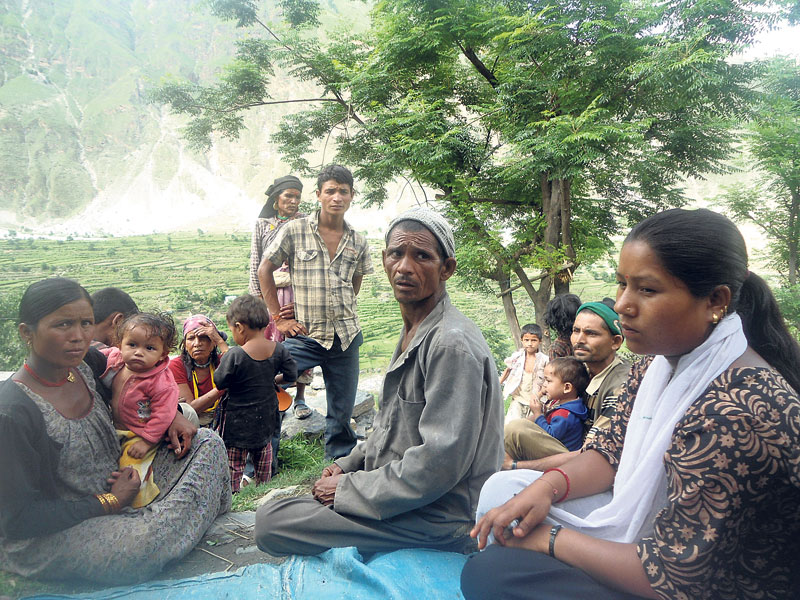 Family members of freed haliyas in an informal discussion in Kochila-9, Bajura in this recent picture.(Republica)

BAJURA, Sept 6: Enough food, safe shelter and dignified life as any other free individual in the society- this was a dream for Rangi BK of Bajura district since he was a kid. Eight years ago, this one of the many bonded haliyas was freed.

On 6 September 2008 (Bhadra 21) the government announced that 12 districts of the far western region, where haliyas were traditionally kept as bonded labor by landlords, have become ‘haliya free’ zone. That means, landlords could not keep anyone as haliya anymore. This was indeed great news for all the haliyas including BK. All what he had dreamt of, since his young days, was going to be true, he felt.

Eight years down the line, BK feels he is a defeated man. He is pretty much sure by now, that the government, which had not only announced the grand liberation, but had also promised long list of programs to ensure better life of the haliyas like him, was a grand lie.

“It was foolishness to get excited with that excitement. I now think that we were better as haliyas instead,” says BK, in rather low and disappointed tone. “The government’s inaction has agonized us more than the landlords,” he adds.

Dejection of the likes of BK is understandable. Their lifestyle has not changed in the last eight years. Few of ex-haliya families have their own house to live in. Fewer of them are economically sound to sustain their families. With landlords no more treating them as ‘their’ labors, whatever little support they used to get during illnesses and other problems from them, is no more available. Sole responsibility of looking after and raising children has come upon the ex-haliya, who however have no skills or means to generate income.

According to BK, survival has become tougher for the free haliyas since the day government destroyed the landlord’s support from their lives.

“Many of the freed haliyas have nowhere to go other than to still sleep in cowsheds. They have no money or income generation skill to start a new life that is self reliant and independent. Most of us have been hardly able to send our kids to schools,” BK said.

As part of the haliya liberation program, the government was supposed to verify liberated haliyas and launch programs to assist in their rehabilitation. As part of this agreement, it had announced several economic and social empowerment for the haliyas.

“The government had not fulfilled its promises. Instead of getting better life, the liberation has proven to be a curse for us our status,” noted Gangaram Lohar, another freed haliya.

“We still plow fields of the landlords. But unlike in the past, now we don’t get support that we were entitled to as part of the tradition of haliya. Now we live in even greater poverty and that has multiplied our problems,” Luhar said.

He said that when they were freed by the government, haliyas had stopped working for landlords. However, later they had to return to the job as they had not options. “There is no problem in working. But then, if we are limited to the same work always, how can anything change in our lives?” Luhar questioned.

Luhar does not have his own house and because of that his family has been living in his landlord’s small shed.

“Sharing your living spaces with cattle is not easy. But we have no option,” he lamented. “It is very difficult to live with the cattle monsoon and summer season,” he added.

Reflecting experience in the aftermath of the liberation announcement, Luhar shared that it was huge defeat for people like him, when they had to return to the same landlords whom they had earlier challenged. “We resisted the landlords, stood against the historical exploitation of the haliya and had promised to ourselves that we will never kneel down in front of the landlords for our survival. But the government’s deception forced us to do whatever we promised to ourselves of not doing.”

Udaya Sing Karki, a landlord whose family had haliyas before they were liberated, said that he was forced to accept the labor of his haliya, when he returned back to the family for a living. “He had refused to work for us thinking that he could afford a living. But he returned back, begging to us for accepting his labor. It was difficult to deny him,” he said adding that the government and social organization distributed dreams to haliya but did not deliver aid to support them in leading a better life.

Dhane Luhar, another freed haliya, says that the celebration of the haliya day is only limited for the right activists and NGOs. “We simply have no reasons to celebrate. Instead we feel that the haliya liberation day was the day that added to our historical woes.”