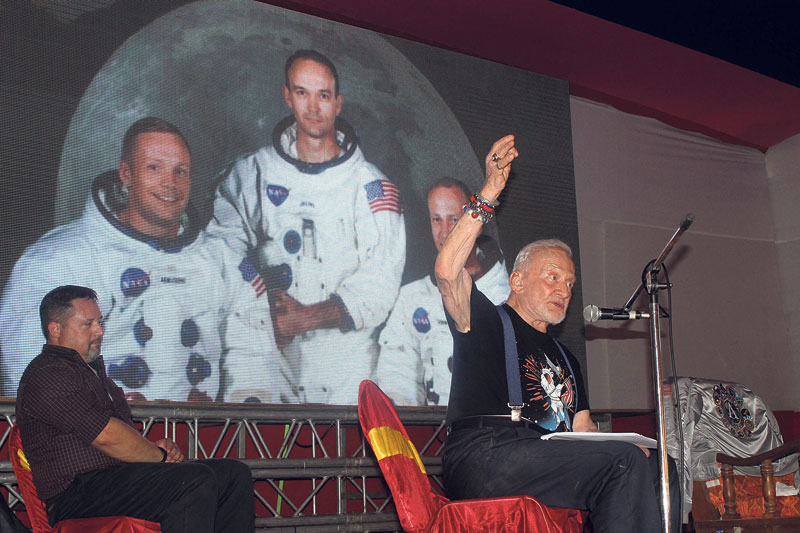 Moon astronaut Buzz Aldrin (right), who is on a Nepal visit, telling the schoolchildren (pictured below) the story of his success in Biratnagar, Tuesday.(Chuman Basnet/Republica)

BIRATNAGAR, Sept 6: Former astronaut Buzz Aldrin, who arrived in Nepal two days ago, visited Sunsari district and gave an inspiring speech to students at Sitagunj-based Everest Science Center on Tuesday. He motivated the students not to give up on their dreams despite obstacles ahead.

Aldrin, 86, had set foot on the Moon together with Neil Armstrong on July 20, 1969, achieving the feat of humans landing on the Moon for the first time.

Sharing his story, Aldrin said, “Courage and confidence took me to the Moon, beating the impossible. If you have that, no dream is too high.” During an hour-long speech, students broke into applause time and again.

The former astronaut shared his experience of landing in the Moon with the curious students.

“Stepping in the Moon is the most important moment of my life. And receiving honors after landing back on Earth is very unforgettable, too,” said Aldrin.

Speaking at the program, Aldrin talked about potential human habitation on Mars. He encouraged students to get involved in science projects and play roles in the development of science and technology.

“Colleges can teach students to build small rockets as project works. Colleges and universities of any country can teach their students the knowledge of rocket science at a very low cost,” he said.

Aldrin and his team had visited Lumbini, the birthplace of Gautam Buddha, on Monday and arrived in Biratnagar on Tuesday morning.

KATHMANDU, Sept 6: Buzz Aldrin, American engineer and former astronaut, who is the second among 12 persons to have stepped on... Read More...

Gaurika sets new national record, fails to qualify for next round
10 hours ago