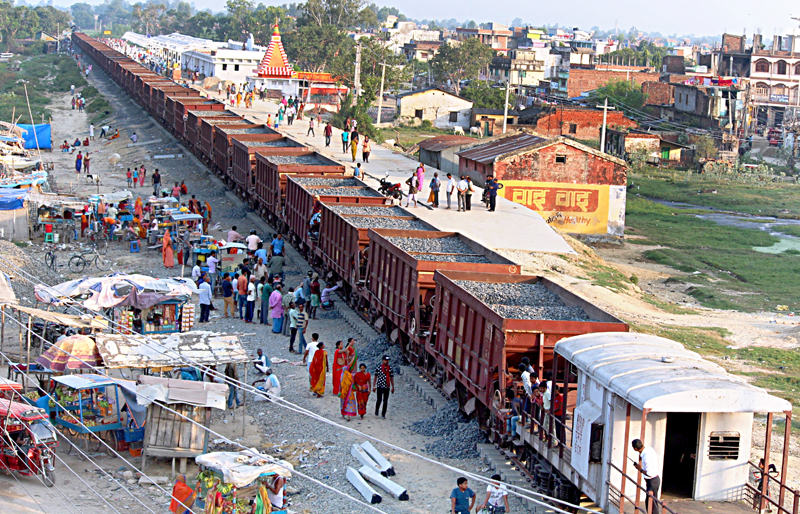 JANAKPUR, Oct 11: A freight train loaded with around 5,000 tonnes of ballast arrived in Janakpur from Jaynagar of Bihar on Wednesday.

Binod Kumar Ojha, a site engineer at the Nepal Railway Department, told Republica that the freight train returned to India yesterday evening itself.

This was the first test run of the broad gauge railway which is expected to come into operation by the middle of December this year, officials said.

"Efforts are on to operate the 35-km broad gauge train between Jaynagar and Kurtha of India by the middle of December as far as possible. Then the Indian side will handover the railway track to Nepal," Ojha said, adding that the two sides are committed to accomplishing the task on the stipulated time.

This would be the first broad gauge railway in Nepal if it came into operation by the middle of December.

Nearly century-old Janakpur-Jaynagar railway remained shut for the past five years after Nepal and India agreed to convert it into broad gauge.

The Indian government agreed to help Nepal to repair and upgrade the Janakpur-Jaynagar railway when the then President Rambaran Yadav paid a visit to the southern neighbor in 2010.

In a bid to further strengthen people-to-people ties through connectivity, Nepal and India have agreed to develop cross-border railway links during the recent high-level exchange of visits.

India agreed to extend financial support to build a new electrified rail line between Raxaul city of India and Kathmandu during Prime Minister KP Sharma Oli's first state visit to India in April this year. During the visit, the two sides appreciated the progress made in the implementation of Phase-I of the India-Nepal cross-border rail link projects.

The two leaders noted that the stretch of railway lines from Jaynagar to Janakpur/Kurtha and from Jogbani to Biratnagar Custom Yard will be completed in 2018, and that work on the remaining stretch of the ongoing rail link projects: (a) Jaynagar-Bijalpura-Bardibas and (b) Jogbani-Biratnagar, will be taken forward on priority, according to a Nepal-India joint statement issued in April.