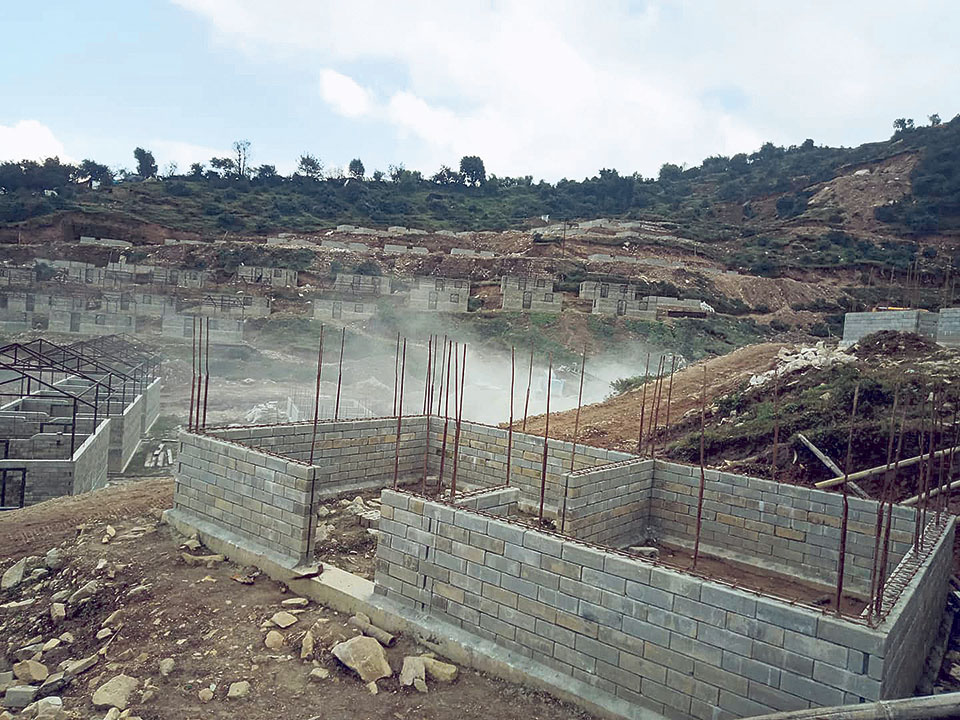 Houses under construction with support from the Non-resident Nepali Association at Gupsipakha in Laprak of northern Gorkha pictured on Sunday.

GORKHA, Oct 8: The snail-paced reconstruction by the Non-Resident Nepali Association (NRNA) has compelled the quake victims of Laprak, Dharche Rural Municipality, to spend their fourth consecutive Dashain in tents.

Not even a single quake victim here has been able to move into a quake-resilient home. The quake victims lament that if the government had allowed them to build their houses on their own, like the victims of other quake-damaged areas, some of them would have been living in their concrete homes by now. Locals here have been dreaming of living in their new houses since long but they have not been able to do so.

Currently, 573 households of Laprak are living under makeshift tents and tarpaulins. "At first, there was a confusion regarding where to relocate the settlement. But NRNA spent three years doing nothing," said Maiya Gurung, adding, "The government refuses to provide us the grant and NRNA has not yet built our houses. We are left with no option other than living in tents." Laprak was at the risk of landslide even before the catastrophic earthquake of 2015. The risk has only increased following the earthquake.

NRNA signed a contract to build an integrated settlement in Gupsipakha for the quake victims of Laprak. But the sluggish reconstruction work by the association has largely disappointed the quake victims of Laprak. The settlement is being built with investment from the NRNA and donation from the locals. The government declined to offer them the reconstruction grant after NRNA assured to build their homes.

Some of the victims have been risking their lives by living in their quake-damaged houses after being tired of waiting for the NRNA. A trilateral agreement was signed between the NRNA, National Reconstruction Authority and beneficiaries to build the settlement in around 18.3 hectares of land. Gupsipakha is an extremely cold place. Though some of the houses have been built in the settlement, there are no toilets.

"It is not yet decided who will take the responsibility of constructing toilets," said Santosh Gurung, chief of Dharche. NRNA officials claim that the delay is because of the problems in the supply of construction materials due to topographical difficulty, lack of manpower and changing weather.