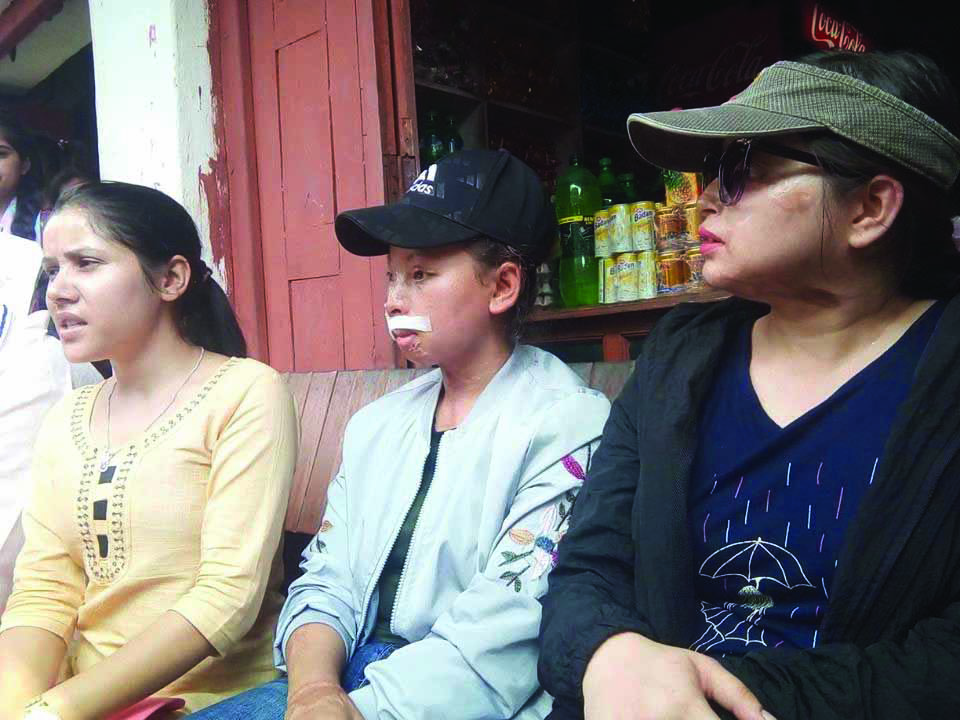 SINDHULI, Oct 7: Against the backdrop of an increasing number of acid attacks against women and girls, victims here have lamented that the culprits are enjoying impunity because the laws are lax.

A series of acid attacks lately have compelled victims across the country to come together and speak up against the heinous crime. Participating in a rally organized in Sindhuli, girls undergoing treatment for acid attack stated that they were the victims of weak law enforcement .

Bindabasini Kansakar of Hetauda, who was doused with acid in April 2013 while she was inside her own shop, said the government makes laws but doesn't enforce them strictly .

"Acid which is easily available in market for just Rs 120 a bottle scarred my face permanently," said Kansakar, adding," The government must come up with strict laws to regulate the sale and distribution of acid." It will be easier to book the culprits if it is made mandatory for those buying acid in the market to furnish their particulars, including the purpose of the purchase, she said.

"I cannot begin to explain the agony I suffered from the acid throw," she said with tears rolling down the cheeks. Despite my repeated pleas, the police did nothing, she added." She feels terrible every time someone cringes on seeing her face, and that happens often. She had to undergo 18 surgeries in the last five years. She laments that no one understands her misery.

In February 2016, Sangita Magar was returning home from her tuition class with her friend Seema Basnet when they were attacked with acid. Magar these days speaks up against the brutal crime so that other girls will not suffer the same fate.

"Women and girls in our country have to put up with various forms of violence because the laws are limited to the law books," said Magar. To those who blame the victims themselves , she suggests a change in perception.

Most acid attack victims also lament that society makes life difficult for them . "We don't demand much. All we want is for the government to create an environment where all girls can feel safe and the perpetrators cannot roam free," said Seema Basnet . She called for a campaign to rid our society of acid attacks.

On September 11, Samjhana Das, 18, and her sister Susmita, 15, of Rautahat suffered an acid attack while they were asleep at home. Samjhana suffered 40 percent burn to her body and succumbed while Susmita was able to recover.

A week later, Basanti Pariyar, 27, of Kawasoti Municipality-16, Nawalparasi was attacked with acid and also stabbed, apparently by a neighbor. All these incidents have raised serious concern for the safety of women and girls.

A silent rally was organized by Sindhuli Trust Nepal at the initiative of Ujjwal Bikram Thapa, coordinator of the trust. The victims won't feel easy until the attackers are safely behind bars, he said.