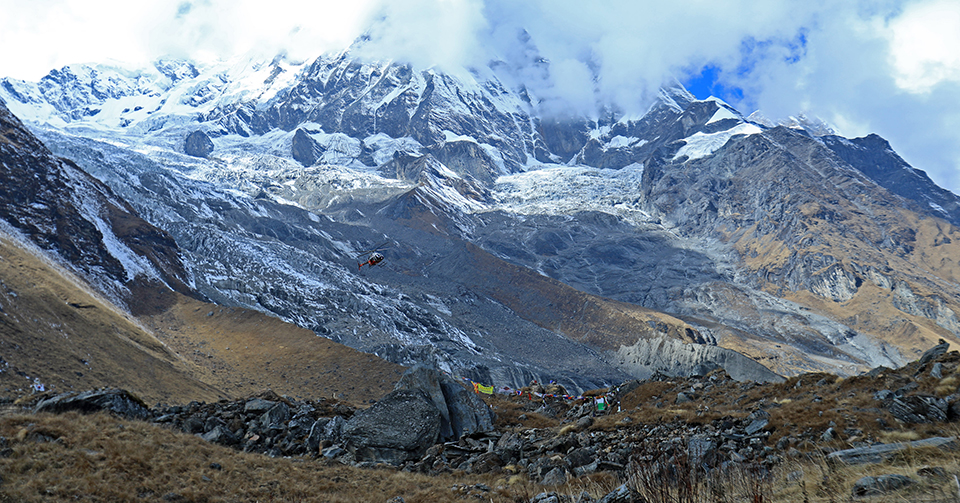 POKHARA, Oct 7: Despite a restriction for choppers to fly to Annapurna Base Camp (ABC), helicopter companies running the flights to the base camp, flouting the directive of the local government.

Annapurna Rural Municipality had directed chopper companies not to operate flights at the ABC from August 17 this year except for rescue purpose.

The municipality's directive came to prevent sound and environment pollution due to chopper flights that was affecting the wildlife of the area.

According to data received from Pokhara Airport, Simrik Airlines alone operated seven chopper flights to ABC on Friday morning. Likewise, Prabhu Helicopter had conducted two flights on Friday, although both of them were rescue flights.

“Simrik had conducted seven flights to ABC on Friday morning. Of them, one flight was empty while the other six carried tourists to ABC," said Kashiram Poudel, information officer at the airport.

As the rural municipality has not formally informed the Pokhara Airport about chopper restriction at ABC the airport has no authority to stop flights, he added.

"Once the company receives permission for charter flight they can fly up to any point,” he said, adding, “Either the restriction should be partial or we are not able to stop flights.” To operate their flight to partially restricted areas, companies have to take permission from the Ministry of Home Affairs. He said that they cannot stop flights as they have not received any formal information from any concern authorities.

“We have not permitted any companies for ABC flight. We won't be giving permission for commercial flight at any cost,” he added. He also said that the rural municipality will conduct a meeting regarding Friday flights. “Needful action will be taken against the companies,” he added. Loud sound of chopper was creating sound pollution in the ABC area, he claimed.

Even the tourism entrepreneurs are demanding for restriction on choppers to ABC as the choppers benefit only the companies that operate them. Before this, Annapurna Conservation Area Project (ACAP) had also taken initiative to stop chopper flights at ABC. However, the initiative went unnoticed. Just few months ago, ACAP had sent a request letter to the CAAN to stop chopper flights at ABC.

KATHMANDU, Oct 2: A parliamentary committee has directed the Ministry of Culture, Tourism and Civil Aviation (MoCTCA) to begin work on... Read More...