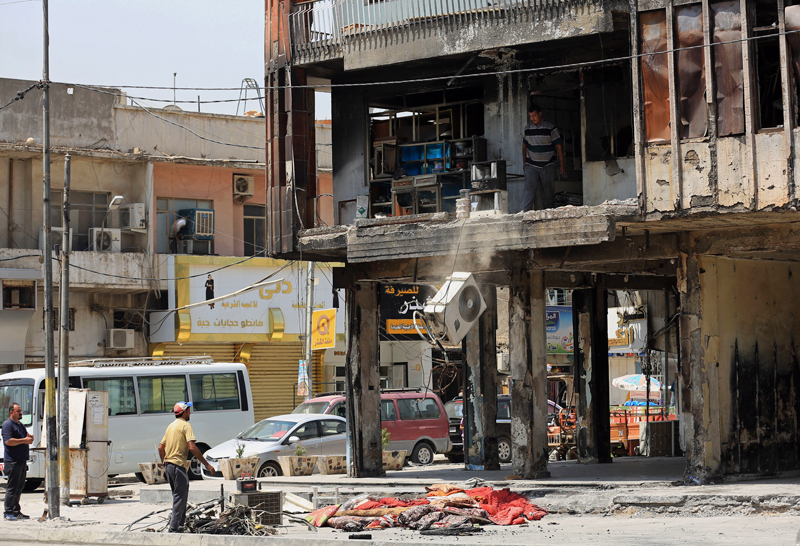 Shortly after the attack, the Islamic State group claimed responsibility for the bombing in a statement posted online.

The explosives-laden pick-up truck was left in a parking lot in the Shiite-dominated district of Karradah, near a hospital and shops, a police officer said. Up to 28 people were wounded and at least 15 cars were damaged, he said.

A medical official confirmed the casualty figures. Both officials spoke on condition of anonymity as they were not authorized to release the information.

Early on Tuesday morning, mourners held a funeral procession for some of the dead. Men carried coffins wrapped in Iraqi flags as women wailed and pounded their chests in grief.

At the scene of the bombing, shocked residents examined the blood-stained pavement and the damage to nearby shops.

The Islamic State group issued a statement saying the suicide attack targeted Shiites. The Associated Press could not verify the authenticity of the statement, but it was posted on militant websites commonly used by the extremists.

Karradah is a major commercial area of the capital. Its streets are lined with clothing and jewelry stores, restaurants and cafes. The area is usually packed with shoppers, especially ahead of next week's Muslim holiday of Eid al-Adha, or the Festival of Sacrifice, which marks the end of the annual Hajj pilgrimage.

In early July, an IS-claimed bombing killed nearly 300 people in Karradah as Iraqis were preparing for the Eid al-Fitr holiday, which marks the end of the holy month of Ramadan. The Karradah disaster put the Iraqi government under pressure to improve security in the capital and to rein in corruption.

Monday's attack came nearly two weeks after authorities reopened the sealed off part of Karradah, where the July bombing took place, in an attempt to restore normalcy to the district.

GARDEZ, Aug 3: More than two dozen people have been killed in a bombing at a Shia mosque in eastern... Read More...