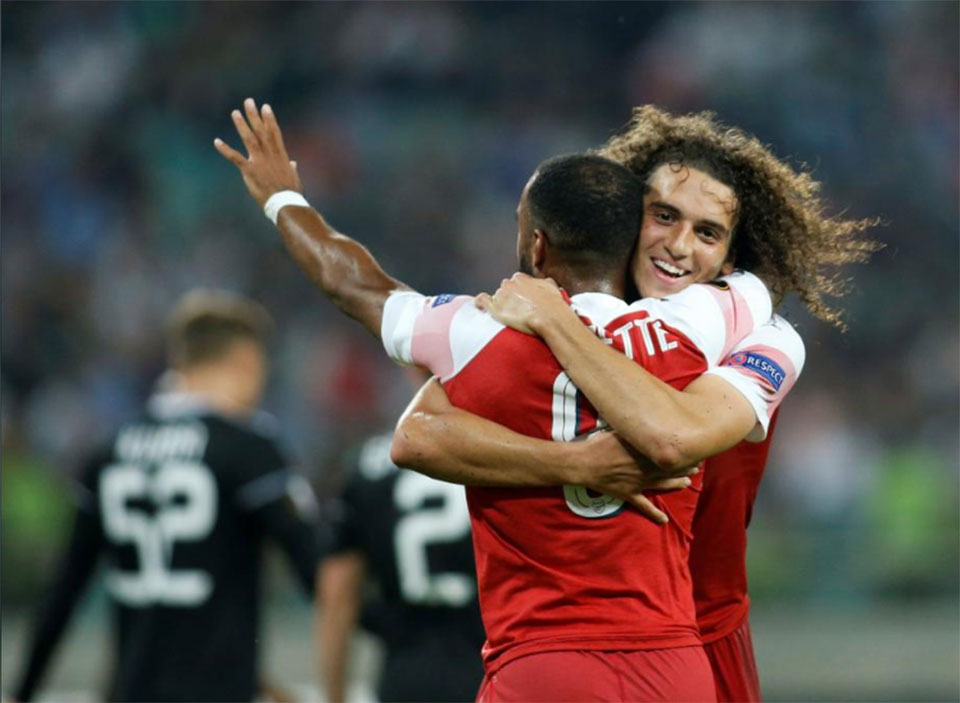 Oct 5: Arsenal enjoyed a 3-0 win in Azerbaijan against Qarabag in the Europa League on Thursday and AC Milan beat Greece’s Olympiakos Piraeus 3-1 but Sevilla suffered a shock defeat by Russians Krasnodar.

Eighteen-year-old Emile Smith Rowe, a product of the Arsenal’s academy was on target as a mainly second-string Gunners maintained their winning start in the competition.

Sokratis Papastathopoulos and Matteo Guendouzi also scored for Unai Emery’s side who sit atop Group E with six points.

Milan trailed to a Miguel Angel Guerrero goal at the San Siro but a late flurry of goals ensured victory for Gennaro Gattuso’s side.

Patrick Cutrone scored twice for the Italians and Argentine Gonzalo Higuain was also on target as Group F side Milan also made it two wins out of two.

Sevilla, winners of the competition three times between 2013 and 2016, went down 2-1 with Georgian midfielder Tornike Okriashvili grabbing the winner two minutes from the end after Nolito had put Sevilla in front.

RB Salzburg came back from a goal down to beat Scotland’s Celtic 3-1 in Austria.

Odsonne Edouard’s cool finish put Celtic in front in the second minute but Munas Dabbur and Takumi Minamino scored after the break. Celtic’s James Forrest was sent off after a foul in the area and Dabbur slotted home the resulting penalty to put the game beyond Brendan Rodgers’ side.

Chelsea had to work hard for a 1-0 win against Hungarian side Vidi with Alvaro Morata getting the 70th minute winner.

Vidi, previously known as Videoton, reached the final of the UEFA Cup in 1985 and made life difficult for Maurizio Sarri’s side with a disciplined defensive display.

Steven Gerrard’s Rangers side moved top of Group G after the Scottish Premier League club came from behind to beat Rapid Vienna 3-1 thanks to two goals from Alfredo Morelos.

In Group H Lazio had two men sent off in their 4-1 loss to Eintracht Frankfurt.

Dusan Basta and Joaquin Correa saw red early in the second half for the Rome side while Danny da Costa struck in the fourth minute and again in stoppage time for the Bundesliga outfit.

In the other Group H game last season’s runners-up Olympique de Marseille drew 2-2 at Cypriot side Appollon after being two up. The hosts equalised in stoppage time through Emilio Zelaya to deny the French side their first win in the section.

Substitute Lucas Alario scored a brace for Bayer Leverkusen in their 4-2 Group A win over Cypriot side AEK Larnaca.

In Group G Villarreal needed a penalty from Santiago Cazorla in the sixth minute of stoppage time to grab a 3-3 draw at Spartak Moscow. The Russians were set for three points after Paraguayan Lorenzo Melgarejo drove home in the 85th minute.

LONDON, Oct 4: Arsenal’s young guns continued to shine as they dismantled Standard Liege 4-0 on a hectic night of... Read More...