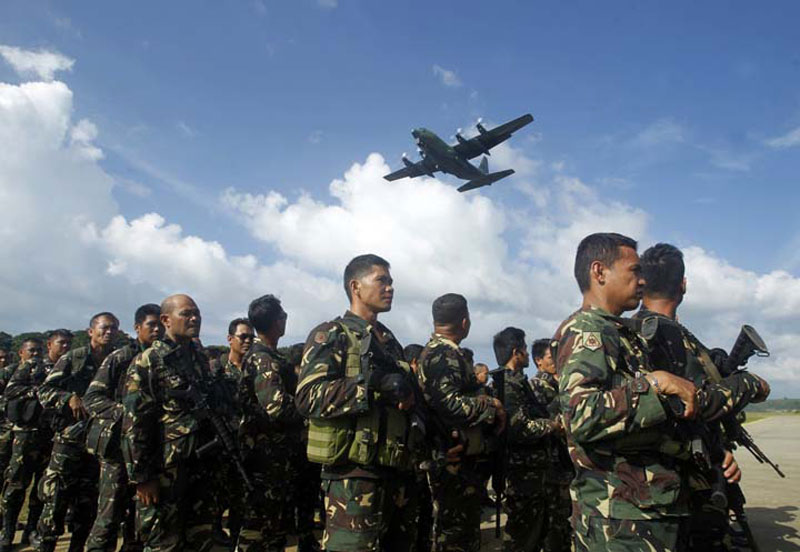 Soldiers await deployment to the war zone against the Abu Sayyaf Group at a military airstrip in Jolo, Sulu, last Thursday. (EPA)

The President met with members of the Cabinet security cluster in Davao City late Saturday night and considered the option of recruiting Gurkha warriors against ASG members, according to Agriculture Secretary Emmanuel Piñol.

Piñol was among the Cabinet members present in the closed-door security meeting, held a day after the deadly night market explosion in Davao City. The Abu Sayyaf group has reportedly claimed responsibility for the attack.

“If I have to hire the Gurkhas to help us fight the Abu Sayyaf, I am willing to do it,” Piñol quoted the President during the meeting that lasted until 4 a.m. Sunday. “These people are like germs which must be eliminated,” Duterte added.

The Gurkhas, known for their motto “Better to die than be a coward,” have been been part of the British Army for almost two centuries. They are widely considered as the most skilled and fiercest fighters in the world.

MANILA, Dec 26: A typhoon that struck the central Philippines over Christmas has killed at least 13 people, disaster agency... Read More...

DAVAO, Dec 24: Philippine firefighters recovered one body from a burning shopping mall Sunday and there were “zero” chances of... Read More...

Monsoon begins in Nepal
22 hours ago