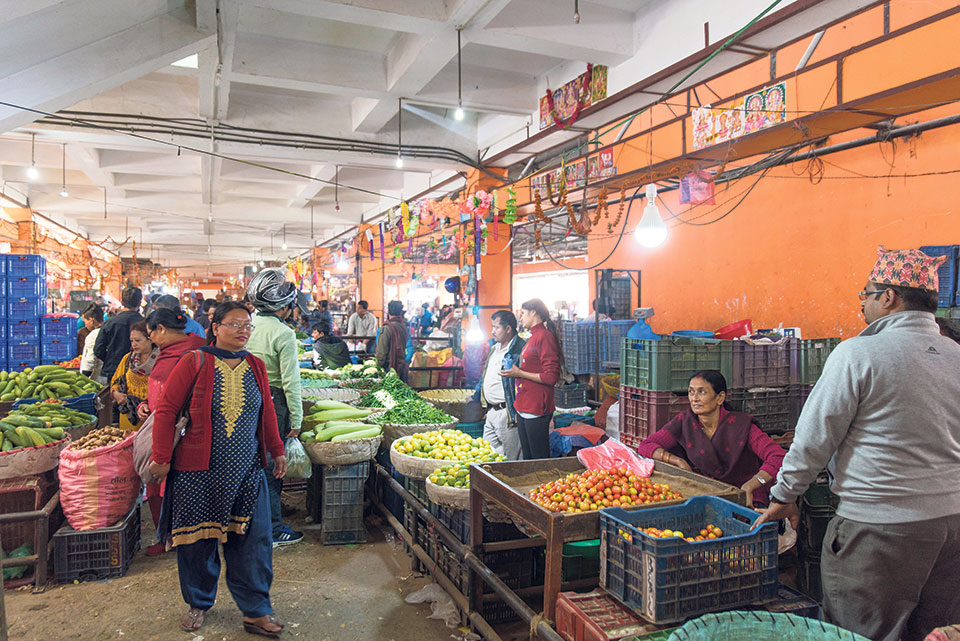 A meeting of the board of directors of the board held on Tuesday decided to scrap license of traders classified into red category.

As per the instruction of Minister for Agriculture and Livestock Development Chakra Pani Khanal, the board had classified traders, who were illegally renting out stalls allotted them to other traders, into red category.

With this, the number of traders who have lost their licenses to operate stalls at Kalimati Vegetables Market has reached 57. Earlier on September 4, 2018, the board has scrapped license of six traders.

According to the board, 16 wholesalers, two cooperative/farmer groups, three fish traders, 14 retailers, among others, have lost their license.

The board has asked 16 other traders to furnish more documents, while investigation against 25 others is underway.

Following Minister Khanal's instruction, the board had classified 98 traders, who had illegally rented out stalls allotted to them, to other traders or firms.

"The fate of other traders in red category will be taken in the next board meeting," Tejendra Prasad Poudel, executive director of the board, told Republica.

The operator of the largest vegetables market in the country decided to scrap license of wrongdoing traders to promote fair business practices in the market. Some of these traders had knocked the doors of the court, alleging the board and the agriculture ministry of taking 'biased decision'. However, Kathmandu District Court took decision in favor of the government and the board. It paved the way for the government to take action against the wrongdoing traders.

Meanwhile, the board has formed a five-member committee to prepare criteria for distribution of stalls at the vegetables market. Once the criteria are finalized, the board will publish a public notice, inviting interested people take the vacated stalls on lease, Poudel added.

Commenting on inspection carried out at the Kalimati market by the Ministry of Industry, Commerce and Supplies, Agriculture Minister Chakra Pani Khanal said that both the ministries are trying to create an environment conducive for consumers, farmers and traders.

Meanwhile, Minister for Agriculture and Livestock Development Chakra Pani Khanal on Tuesday made public work progress that the ministry achieved under his leadership.

The report, which documents activities and achievements over first six months of Khanal's tenure at the ministry, outlines formulation of new laws and revision of existing as one of the biggest achievements of the ministry. During the six-month period, the ministry brought Food Safety and Quality Control Policy, Cardamom Policy and Veterinary Act, among others, according to the report. Similarly, it has prepared Pesticide Management Bill and Agricultural Profession Promotion Bill 2018.

Similarly, the ministry has prepared Dairy and Dairy Products Production Guidelines 2018 in a bid to enhance quality of dairy products produced in the country.

Realizing that milk produced by farmers is not finding market, the ministry has put a temporary ban on import of milk and dairy products. "We have taken this decision as we want to analyze our production capacity. Once we get a clear picture of demand and supply situation of dairy products in the market, we can remove the ban if needed," Minister Khanal said during a press meet organized in Kathmandu on Tuesday.

Similarly, the ministry has readied draft of a policy for livestock transportation management. The ministry has also announced Food Safety and Quality Campaign in a bid to enhance quality of food commodities.

Under the campaign, the ministry is preparing to hold a meeting with agriculture ministers of all seven provinces. "We will forge coordination all provincial governments for the success of this campaign," Minister Khanal added.

Similarly, the ministry has signed an agreement with Israel to establish modern farms using farming technology of Israel. It has also signed agreements with Qatar, the Netherlands, China and Brazil for agricultural development.

Meanwhile, the ministry started grievances hearing unit from Tuesday itself. Farmers and other stakeholders can directly contact minister and other high-ranking officials of the ministry by dialing 1160 if they have any complaint or suggestions. They can send emails to gunaso@moald.gov.np or send tweets at the ministry's Twitter handle @hello_moald, according to a statement issued by the ministry.

KATHMANDU, Nov 3: Despite commitment and action initiated by the Ministry of Agriculture and Livestock Development to properly manage the... Read More...

KATHMANDU, July 17: Kalimati Fruits and Vegetable Market Development Board and traders at Kalimati market have submitted their statements at... Read More...

KATHMANDU, July 4: Officials at the Kalimati Fruits and Vegetable Market Development Board are reviewing clarifications submitted by wholesalers and... Read More...