In lack of a motorable bridge, a village cut off from the outer world 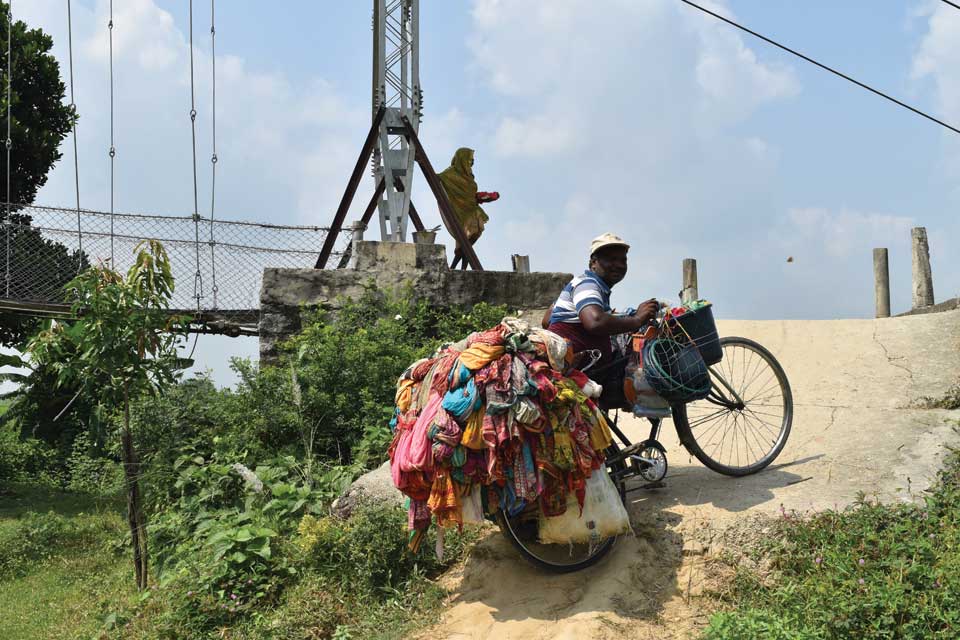 A local of Sripur village, Siraha pushes his bicycle to get on a dilapidated suspension bridge in this recent photo. Photos: Mithilesh Yadav/Republica

SIRAHA, Sept 30: Kaladevi Safi, 70, prays a little more intensely and many more times during the monsoon. And there is a reason for doing so. She feels that not doing so might invite disasters. If anyone falls sick at home or in the village, they can’t be taken to a hospital for health checkup as the village is on an island which is isolated from the outer world during the monsoon.

“During the rainy season, the rivers that flow on all sides of our village are uncrossable. We are totally cut off from the outer world during this season every year,” Safi said. “Only God can help us so I keep praying as he is our only hope,” added the local of Sripur village.

The village is surrounded by two rivers, Kataniya and Dora from the four sides. However, other times the water level is not that high, it is not possible to cross them during the monsoon.

“Our village turns into an island when it rains consistently. We cannot get out of here,” lamented Safi. “During such time, we live a very hard life here,” she added.

Many villages in the district still lack motorable roads. Safi’s village is one among those. Motorable road is still a farfetched dream for the locals. “We don’t think we’ll ever have a road here. It will continue to be like this for years to come,” Safi said.

Sripur village is around 10 kilometers away from Bariyapatti in the south. There is a rough road to the village, which turns to a ‘paddy field’ during monsoon. Not even a motorcycle can pass through it if it starts raining. There is a suspension bridge over the Dora River and but that is also in a dilapidated condition. And this has caused many accidents.

“Many people have been injured while trying to cross through the bridge. This bridge has become old like me. But some still ride motorcycles across it,” said Safi. “One villager even died five years ago,” she added.

While trying to cross the bridge on his motorcycle, Sangeet Singh of Sripur village had an accident five years ago. He succumbed to the injuries.

The rivers turn very risky during monsoon season. The water currents are very sharp and sweep one away. “If we are careless and try to cross the rivers, we can be swept away. Some children have died while they were trying to swim across the rivers,” said Safi. “But no matter how much you warn, children are children. They are hardly sacred,” she added.

According to Safi, there is no presence of government authority, political parties or leaders in her village. ‘Nor do the villagers care’. “We only pray to god when we are in problem. We pray that our children remain safe everyone remains safe. If they get sick, we will be seriously in a problem,” said the elderly woman.

Safi stated that it is not possible to cross the river even when one is normal. When sick, it is out of the question. That is why people pray to the god that their life is saved at least during the monsoon.

Safi remembers political leaders visiting her village during elections. At that time, leaders had come with a few pamphlets in hand. They distributed those pamphlets and left.

“They did stay here for long. They talked with few men here, then told everyone to come to the voting booth on a particular day and then they tried to leave. We stopped them to share our problems,” Safi narrated.

That was during the local and provincial level elections. The leaders, when stopped by the villages, started giving assurances. Tall promises were made that Sripur and other villages will soon have all basic amenities.

“We will open schools and hospital in all villages,” Safi quoted some of them as saying. “But since then they have not returned. We do not need other things, but if there were a strong bridge and a road, maybe we could go to the hospital even during monsoon,” said Safi.

“This is like an island. Totally disconnected from the city. So, the government must give top priority to the development of this village,” said Yadav. “Unless that is done, we will remain where we are,” he added.

Yadav stressed for building a new bridge over the two rivers. That is the first need of the villages, he said.

“Our life has been confined to our village in lack of bridge and road. If there were bridges, we’d have much easier life,” he said.

Also according to another local Anita Yadav, a motorable bridge is essential for the village. “Had there been a nice bridge, life would be different here. Children could go to school, sick could go to the hospital, farmers could carry their products to the market and sell them,” she said.

While there are only thatched houses in the village, children here hardly go to school. Locals depend on agriculture for a livelihood.

Kaladevi Safi of Sripur village said that politicians promised to build a motorable bridge over the river during the elections but the promises remain unfulfilled so far. 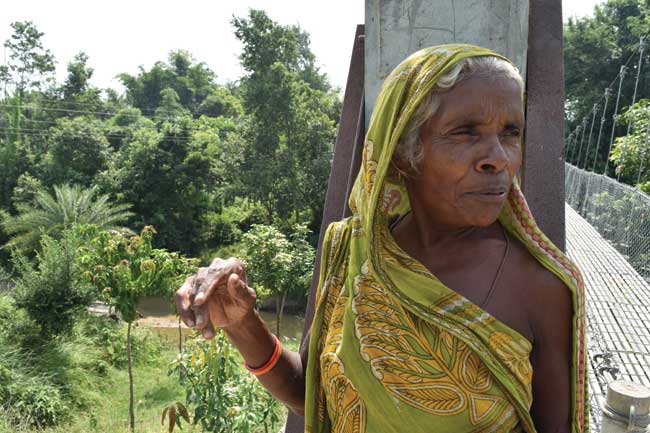 BHIMDUTTANAGAR, July 2: As many as seven families were displaced following landslide and flash floods triggered by two days of... Read More...