Shopping for clothes in Kathmandu can be a nightmare. Not only is it difficult to find the kind of jeans or dress you are looking for but the prices are sky high and, more often than not, the quality of the garment doesn’t even justify the number on the price tag. Aashish Pradhan and Sagar Pangeni founded the lifestyle brand Basemark to solve this problem and give the valley denizens an opportunity to clad themselves in good clothes while not having to completely empty their wallets.

Pangeni was the one who initially came up the idea of Basemark about five years ago. He has been working in the clothing business for more than two decades and was a wholesaler before the launch of Basemark. When he thought of opening a reasonably priced store in Nepal that also offered a retail experience, he shared it with his friend Pradhan who he has known since his college days.

Even though Basemark’s first outlet, located in Gongabu, has been running for the past two months, Pradhan claims that they have not officially launched the store. “We didn’t want to run Basemark before officially launching it. But people walking past the building kept popping in requesting for a speedy opening of the store because they wanted to shop here. This outlet is still under construction,” he explains adding that since many people visit the store on a daily basis, they simply can’t shut their doors now and wait for its official launch.

Pangeni mentions that because he and Pradhan are so involved in everything themselves, they logistically work in a way that makes their products cheaper for the buyers. He claims that the two of them directly buy products from factories that manufacture them. Thus their products skip a lot of transits (like exporters and wholesalers) and that, in turn, reduces their cost price and they are able to sell clothes and accessories at reasonable prices.

Pradhan states that he and Pangeni have been working on Basemark ever since they got the idea for it. It took them five years to get here because initially they were looking for a huge space as they wanted their outlet to be very sizeable and roomy. At the same time, they were also researching on other smaller aspects regarding the launch of their store, including the ambience and product displaying tactics.

It was only a few months ago that they came across a 7,000 square feet area in Gongabu. Although it was not the area they were officially planning to set up their store, they came to a conclusion that this was the best place out of all the ones they had seen. They also found out that Gongabu was one of the most populated areas in Kathmandu. Pangeni reveals that even though the store is still under works, many people are actually coming in and shopping at Basemark already.

Pangeni and Pradhan visited multiple outlets of brands like Uniqlo, Zara, H&M, and Louis Vuitton while working on Basemark. During these visits, they first handedly felt that the retail experience at the outlets of such brands was a lot more customer friendly and inviting than at stores in Nepal. They decided then that they wanted to recreate a similar vibe at Basemark.

Currently, Basemark’s primary target audiences are females between the ages of 13 to 25.  It also has a male clothing section but it only has limited products. Pradhan mentions that they are planning on expanding that section and introducing a few other sections as well. They are also planning on adding a big section that covers plus size clothing because they believe that is something that is not available in Nepal in a grander scale. Another section that is getting added is the kid’s section. Besides clothing, accessories like scarves, bags, shades, and shoes are also available at Basemark.

Because the store is still in its nascent stage, Pangeni mentions that they are taking their customers’ suggestions and tweaking the layout and workings of Basemark accordingly. They also learn what kind of clothing items their customers are in need of before restocking or bringing in new products. “We are constantly updating ourselves on the current fashion and what is popular in the worldwide fashion market. We have to do that because today’s Nepali youth is very fashion forward. They know what works for them and have a personal style and we have to meet their requirements,” says Pangeni. He further adds that he and Pradhan handpick all the items that are currently on display at Basemark.

The name Basemark apparently came about because the two founders wanted to emphasize that their products are super affordable. They have placed the marked price of each product so low (at the base) that if they go any lower, they will go into loss. They further reveal that originally they planned to just sell items that are under a thousand rupees. Although they still stick to this motto for the most part, they have realized that is not applicable for jackets, shoes, and a handful of other items.

“Some customers actually suspect that our products aren’t of good quality because similar products are sold for double or triple the price at other stores in Kathmandu,” claims Pradhan. He also adds that Basemark can’t afford to give discounts because they already have a low margin in their marked prices.

Pangeni and Pradhan state that Basemark’s customers are very interactive and they are very grateful for that. “They spread the word about Basemark so we haven’t felt the need to traditionally promote our products. Many of them tag Basemark while uploading OOTDs on their Instagram,” claims Pangeni.

Currently, their Instagram page is Basemark’s prime source of promotion. They have already gathered a following of more than 16k in just two months. They also run a Facebook page but Pradhan admits that their team is more invested in Instagram because it is the platform that is used more by their target audience.

On their Instagram account, the Basemark team constantly uploads pictures showcasing outfit combinations with products available at the store. Their in-house stylist and visual merchandiser, Sapana Lama, puts together these looks. However, even though they have a huge presence on social media, online sales and home delivery are still not possible. Pradhan admits that the Basemark team has not worked on it yet. He says that though they plan on launching a website for the brand, it isn’t their priority for now. And Pangeni reveals that they will open an outlet of Basemark in Pokhara by Dashain. They will also be launching a few more outlets of Basemark in Kathmandu within this year. 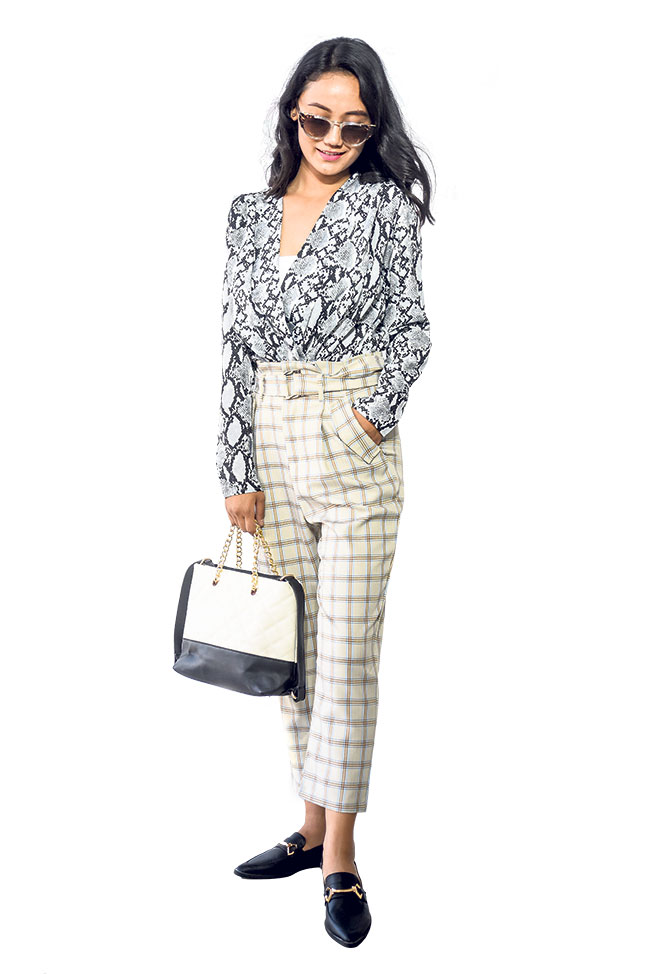 Although the entire ensemble is in a dark neutral tone, the overall look of the outfit is still beguiling. The busy patterned top is balanced by the checkered bottom and the cat eye framed shades beautifully complements the overall look. 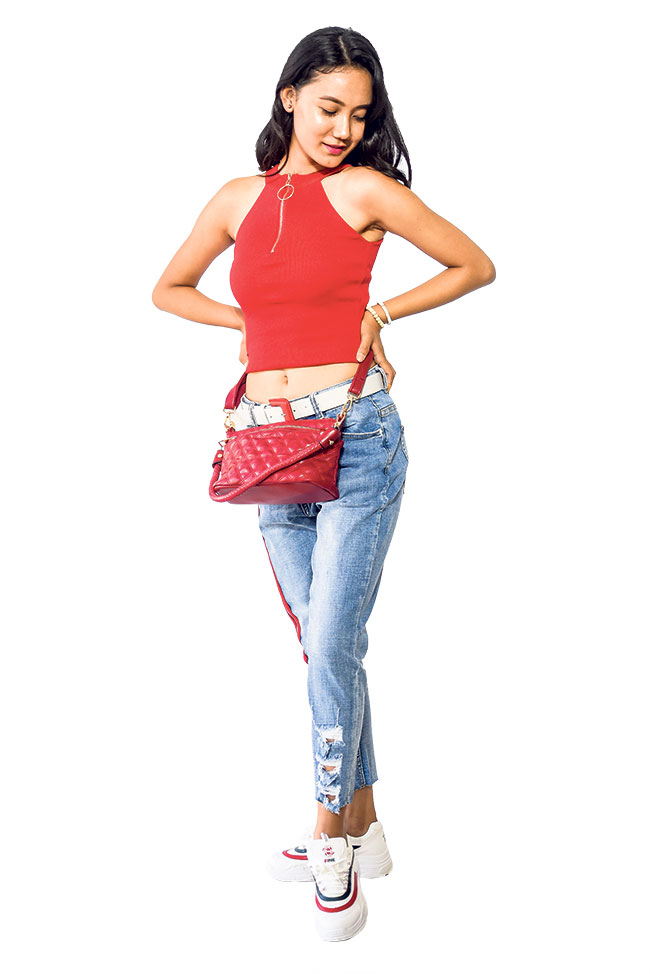 Wear this outfit when you need a little bit of a pick-me-up. The color red is known to evoke feelings of happiness, optimism, and energy. The neutral toned jeans and sneakers complement the camisole and the bag. 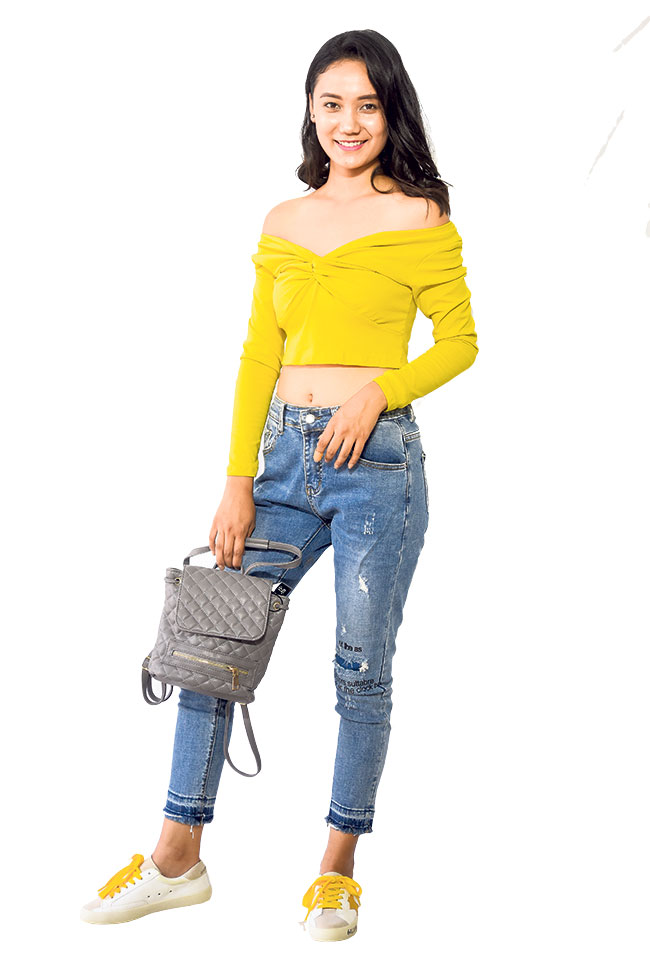 This is another outfit that works well during the fall season. And with fall’s customary color palette, it is warm toned enough to not look basic. 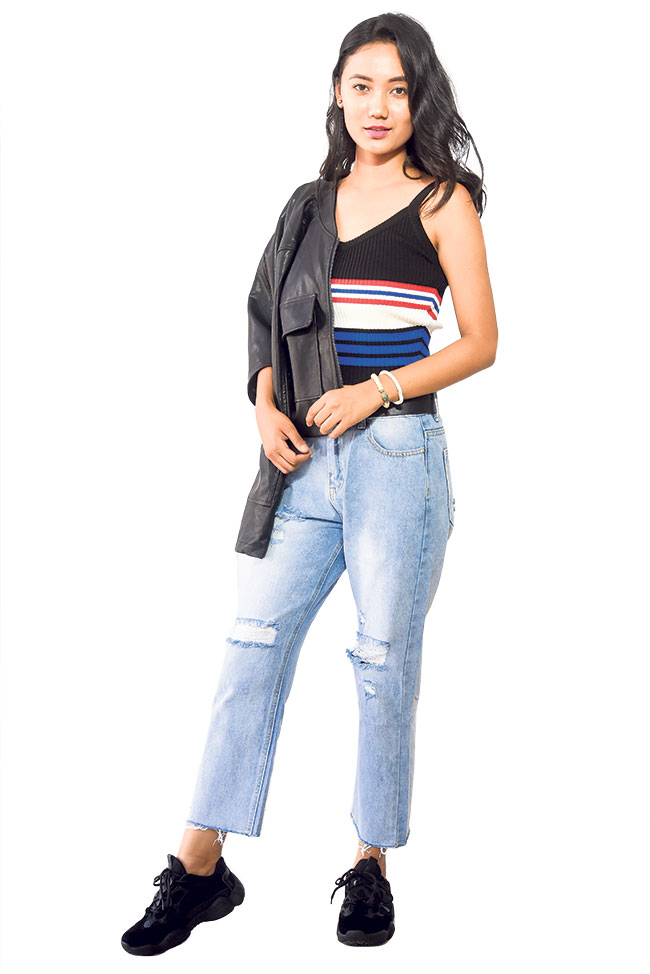 This is the perfect look for fall. The leather jacket is stylish plus it’s a good essential to have during the chilly fall weather. Drop the jacket if you are going out in the afternoon. 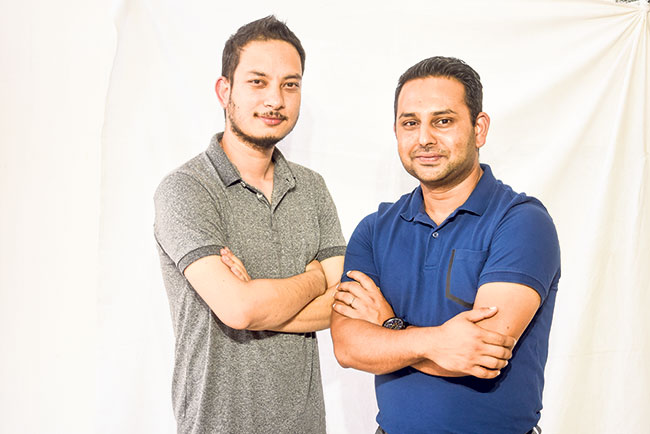 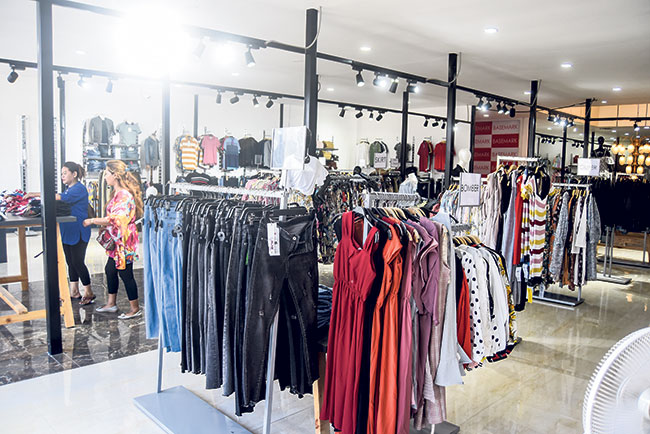 Sabita Panta says she makes it a point to buy new clothes during Dashain because that’s what her parents always... Read More...