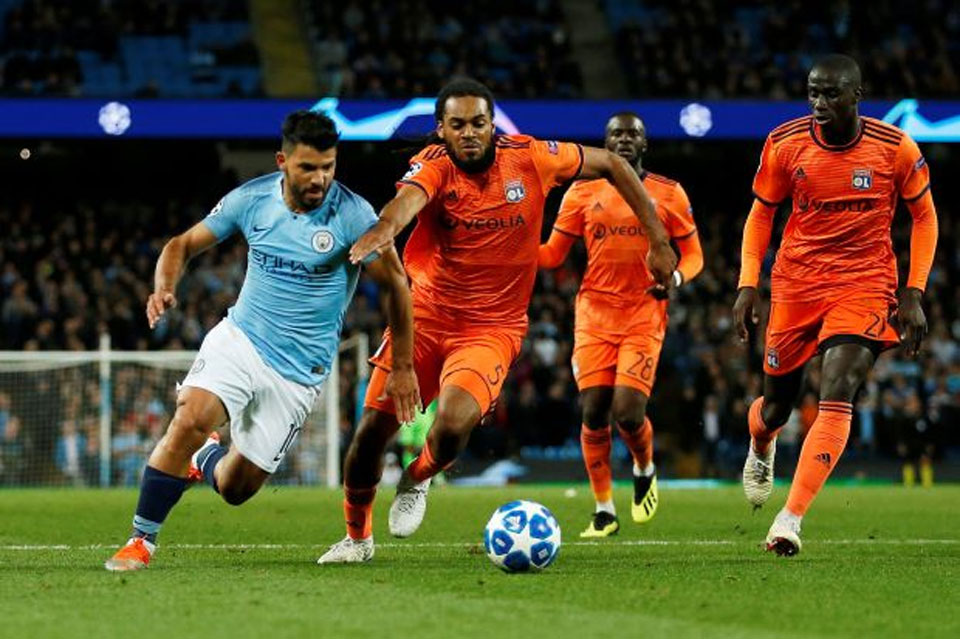 MANCHESTER, Sept 20: Manchester City looked far from potential Champions League winners as they fell to a surprise 2-1 loss at home to Olympique Lyonnais on Wednesday with a flat performance leaving them with plenty of work to do to progress from Group F.

The Premier League champions, favourites with some bookmakers to win Europe’s top club competition this season, were well below their best throughout and now face a serious challenge to progress from a group which also features Germany’s Hoffenheim and Ukraine’s Shakhtar Donetsk.

City manager Pep Guardiola, serving a suspension, was forced to watch the game from the stands as his assistant Mikel Arteta took charge and it was a frustrating night for the pair, whose side have now lost four games in a row in the Champions League.

In contrast to a flat-looking City, Bruno Genesio’s Lyon delivered a tactically superb display, defending in numbers to nullify City’s normally dangerous forward line and then counter-attacking at pace.

City fans do not seem fired up by European competition and there were empty seats in the Etihad Stadium, which lacked any real atmosphere. City’s performance on the field, however, hardly helped to raise the volume.

The visitors took the lead in the 26th minute through Maxwel Cornet, who drove home after Fabian Delph made a hash of clearing a Nabil Fekir cross from the left.

City’s Brazil striker Gabriel Jesus had a strong appeal for a penalty turned down but that was one of the few moments in which he really threatened in the box.

Ilkay Gundogan had an effort disallowed after Italian referee Daniele Orsato ruled that Raheem Sterling was offside but City’s frustrations in attack were not their only problems.

Fekir, who was strongly linked with a move to City’s Premier League rivals Liverpool in the close season, then made it 2-0 to the French side in the 43rd minute, bursting clear and beating Ederson with a low drive after Fernandinho had given up possession in midfield.

It could even have been 3-0 when Memphis Depay hit the post on the hour after a magnificent through ball from Tanguy Ndombele.

After that let-off, City earned themselves a lifeline through Bernardo Silva, who produced a smart finish after a superb jinking run from substitute Leroy Sane.

City’s attempts to get an equaliser, however, were foiled by a combination of a well-drilled Lyon defence, which kept chances to a minimum, goalkeeper Anthony Lopes, who produced a fine save to deny substitute Sergio Aguero and some poor decision-making from City’s forwards.

City sorely missed their injured Belgian midfielder Kevin De Bruyne and without his dominant presence in midfield they struggled to change the tempo of the game and were far too one-paced.

The defeat was a fourth straight Champions League disappointment for City, who lost both legs of last season’s quarter-final against Liverpool and the second leg of their last-16 clash against Basel.

“Really disappointing. To concede two goals like we did is very frustrating,” said City defender John Stones. “We came in at halftime a bit deflated. We picked ourselves up and played a better second half but it was frustrating.”

Lyon looked far better than a team in seventh place in France’s Ligue 1, after two wins from five games, and their coach was delighted.

“It’s a great achievement and a deserved one. We were very, very good in the first half defensively and we also created chances,” said Genesio.

“We had an opportunity to make it 3-0 that I think would have completely killed the game off. We suffered a bit towards the end as their changes meant they had more pace on the pitch and they upped their rhythm, but we stayed solid and worked for each other.”

Aug 31: Manchester City are wary of the threat posed by Champions League Group A rivals Shakhtar Donetsk after being... Read More...

Nepse loses 10.83 points on concern over contraction of liquidity in banks
30 minutes ago