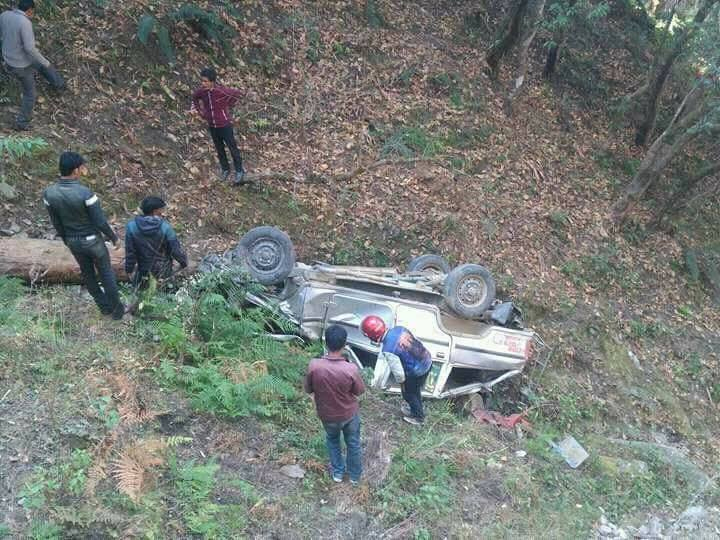 According to the District Police Office, Dadeldhura, the jeep with the number Se 1 Ja 833 fell some 300 meters from the road at Thulokhola at around 12 pm. It has been learnt that all the deceased were from Bhageshwar VDC. Among them five died on the spot while two of them died in the course of treatment.

Five among the deceased who died on the spot have been identified as Ganesh Sarki, Laxman Bhatta, Jayanand Bhatta, Kamdev Chataut and Narapati Pandey. According to police, Diwakar Pandey and Padam Bahadur Malla, who were seriously injured, were immediately taken to sub-regional hospital but died before the treatment could start. The bodies of the deceased will be handed over to the family members after post mortem. The five injured locals including the driver of the jeep have been admitted to the same hospital.

The ill fated jeep was heading toward the district headquarters from Bhageshwar with 11 passengers. “We have yet to find out what caused the accident,” said Prem Bahadur Shahi, DSP of District Police Office, Dadeldhura.

According to Chief District Officer, Udaya Bahadur Singh suspected driver's negligence saying that the road condition is good and the vehicle was not overloaded.

The whole village of Bhageshwar is in sorrow following the tragedy.

KHOTANG, Jun 7: Two people have been killed in a jeep accident in the district on Thursday . ... Read More...

UDAYAPUR, Oct 30: Four people were killed while six others sustained injures in a jeep accident in the district on... Read More...

DHANKUTA, Jan 16: Three people were killed and seven others injured in a jeep accident in Phaksiv VDC of the... Read More...