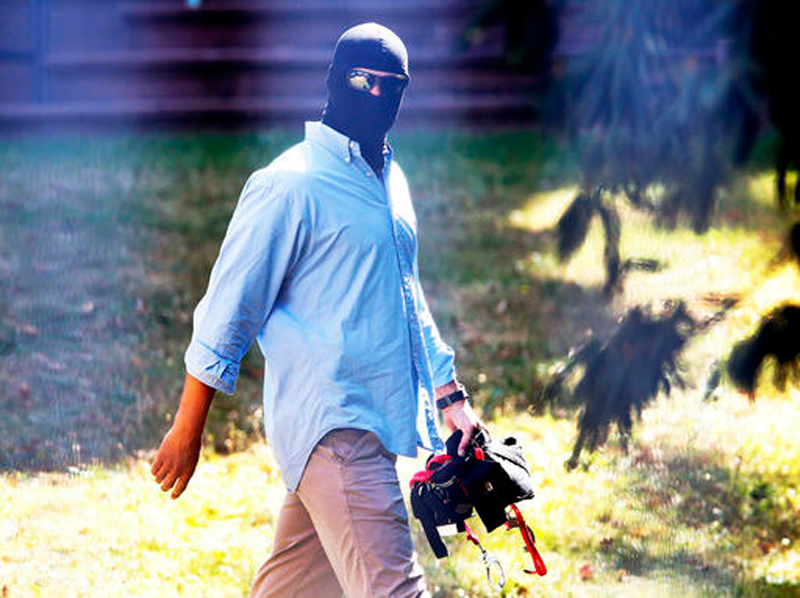 In this picture taken through bars of a fence, a masked German police officer prepares to take away a terror suspect at the German Federal Court of Justice in Karlsruhe, Germany, Wednesday, Sept. 14, 2016. Three Syrian men believed to have been sent to Germany last year by the Islamic State group as a possible "sleeper cell" were arrested in raids on Tuesday, part of efforts to root out extremists sent to Europe amid the migrant influx, authorities said. (AP Photo/Michael Probst)

The Spanish Interior Ministry said the cell, made up of four Spaniards and one Moroccan, posed "a grave, concrete and continued threat to security in Europe."

A ministry statement said the five worked for the Islamic State group by spreading information on several internet sites, among them a Facebook page called "Islam en Espanol" (Islam in Spanish). The site, allegedly managed by two suspects arrested in Belgium and Germany, had 32,500 followers and was growing rapidly, the ministry added.

The statement said one suspect was arrested in Brussels and another in Wuppertal, Germany. Two arrests took place in the northeastern Spanish city of Barcelona and one in the north African Spanish enclave city of Melilla.

The ministry said 113 suspected pro-jihad activists have been arrested in Spain since 2015 while Spanish police had helped arrest 30 more in other countries.

"The security services and the law-enforcement agencies are sharing much more information than they were before," he said, on the sidelines of a conference on countering extremism by the Club de Madrid think tank in Brussels. "It's impressive to see the number of plots which have been foiled in recent weeks, the number of people who have been arrested."

UDINE, July 1: A slick Spain side took their revenge on Germany as they lifted the European Under-21 Championship title... Read More...