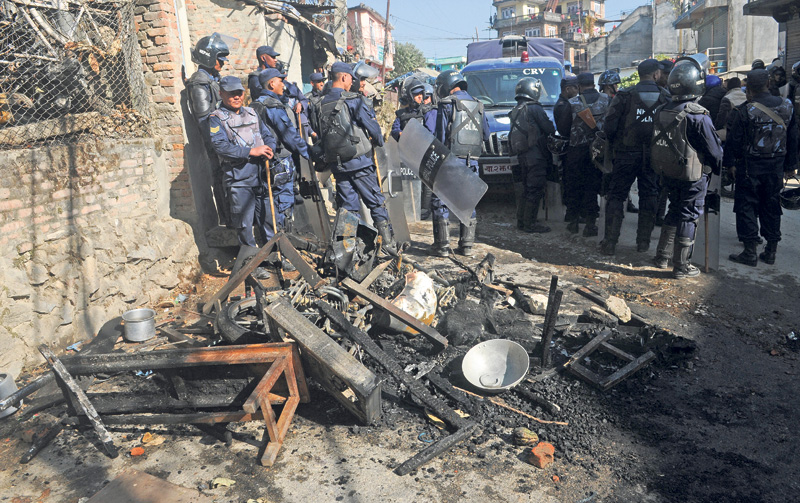 Raj Kumar Lama, 36, originally from Bhimeshwor Municipality-12 of Dolakha district had been found lying unconscious near Helambu Restaurant operated by Sangita Rai (Thing) in Gokaneshwar Municipality-13. Lama, who was rushed to an Attarkhel-based hospital for treatment, was pronounced dead on Saturday night.

According to a press statement issued by the MPCD today, deceased Lama took Maya Tamang, an employee of Helambu Restaurant, to a Dhohorisanjh outlet at 8:30 pm in his own taxi, Ba 2 Ja 223.

When they returned to Helambu Restaurant, it was already 21:30 pm.  The family members of the Rai family were already asleep.  Then Tamang took Maya to the basemen of the restaurant and coaxed her into having sex with him, said the press release.

Tamang told Maya that he had paid for sex with her but did not tell her whom he had given the money when she asked him.

When Tamang made advances to her for the second time, she refused it.  Then, the brawl ensued between the two. Maya managed to push him down as he was heavily drunk. When Tamang was lying on the floor, Magdhan, brother of Sangita, came over and struck him with a piece of brick.

After having found that Tamang was lying on the floor unconscious, Sangita had informed a nearby police post about it.

A furious mob at Nayabasti in the Bouddha area of Kathmandu on Sunday vandalized a police beat and torched four motorcycles following what they described as the 'suspicious' death of Raj Kumar Lama, a taxi driver.

KATHMANDU, May 10: Mayor of Katari Municipality of Rautahat has been held on the charge of a murder case. ... Read More...

RATNANAGAR, July 20: A man was killed at Padampur of Kalika municipality in eastern Chitwan with the use of sharp-edged... Read More...

PARSA, Aug 18: The police in Parsa Thursday arrested a man on the charge of murdering his teenage daughter. ... Read More...