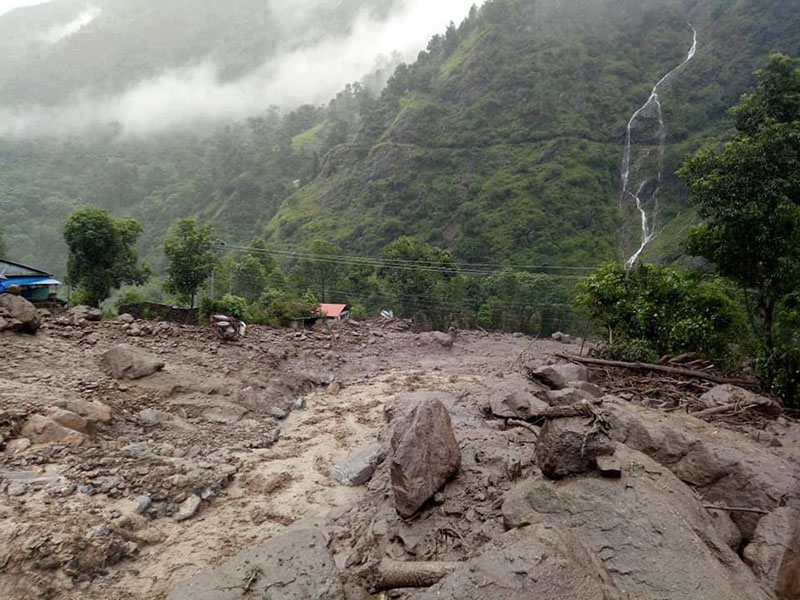 LAMJUNG, Sept 13: The death toll in the Wednesday's Lamjung landslide has climbed to four with the recovery of the body of an elderly woman today morning.

The body of Lalit Maya Gurung, 70, who had gone missing in the landslip at Arkhale of Marsyangdi-3 on Wednesday, was recovered by the rescue team.

The bodies of the three others—Abhirupa Thapa, 60; Sirak Thapa, 10; and Bishnu Gurung, 60—were retrieved from the incident site on Wednesday itself, said the police. Another person is still missing in the incident.

In another incident of natural disaster, the whereabouts of two construction workers-- Baliram Chaudhary and Laxman Tharu both of Thakurdwara Municipality in Bardiya--who were swept away by the Marsyangdi river on Wednesday, are still unknown.

They were workers at the under-construction Tallo Dordi Hydropower Project in Besishashar Municipality.

LAMJUNG, July 23: At least 21 houses were swept away by landslides that occurred in Marsyangdi Rural Municipality-3 of Lamjung... Read More...

GULMI, July 23: At least six persons were killed and five others went missing due to landslides triggered by incessant... Read More...