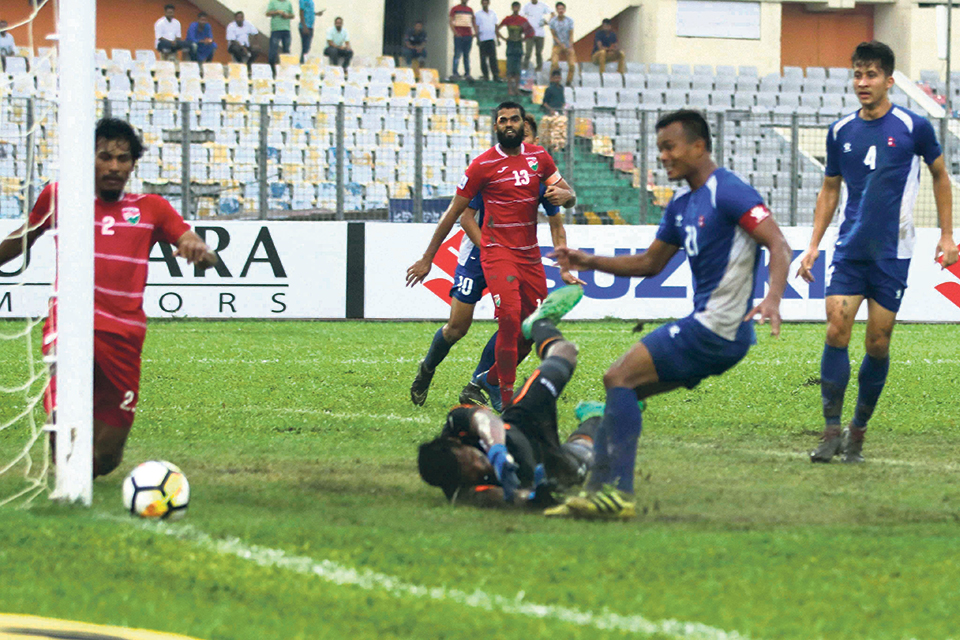 KATHMANDU, Sept 13: Nepal national football team has ended its 2018 SAFF Suzuki Cup campaign with a disappointing 3-0 loss at the hands of Maldives in the first semifinal match, which was halted for 30 minutes due to thunderstorm, in Bangladesh on Wednesday.

An early goal from Akram Abdul Ghanee and two scrappy late goals from Ibrahim Waheed Hassan helped Maldives register its first win of the tournament as it had qualified for the last four beating Sri Lanka on coin toss, as both the teams had the same points, the same goal difference, the same goals scored, and the same goals conceded.

Maldives had a solid foundation in the game with a direct freekick goal from Ghanee in the 9th minute, which kept Nepal in the back foot. Nepal, however, created more chances and took control of the possession throughout the game.

Maldives was awarded the freekick just outside the edge of the box as Nepal striker Bimal Gharti Magar fouled a player. Ghanee hit the freekick which bounced right in front of keeper Kiran Chemjong.

Nepal continued to play attacking and possession-based football from early on in the game, but the decisive finish was missing which saw Nepal fail to score a single goal against the team that had not scored a single goal in the tournament.

Nepal could not create much chance after the heavy downpour, while Maldives looked more comfortable on the ball in its area of the pitch. Ibrahim Madhudhee’s shot in the 27th minute was blocked by Ananta Tamang and shortly after that, the match was halted.

Nepal started very brightly after the restart as Magar’s shot from the corner of the box was saved by Maldives keeper Mohamed Faisal, and the rebound was put wide by Bharat Khawas in the 39th minute.

Nepal then controlled the game and took charge of the possession, but a good defensive organization from Maldives thwarted almost every attack from Nepal.

Nepal used the wider areas of the pitch more often and was awarded more freekicks, among which Sunil Bal’s set piece was not much effective after Khawas was fouled outside the box in the 42nd minute.

Bal got another set piece in the second minute of the four added on at the end of the first half, but his corner was punched away by the keeper. Bal got another freekick after he was fouled in the third added time, but his freekick went over the bar again.

Nepal started the second time on full attacking mode, but the corner taken by Bal was cleared in the 46th minute of the match.

Nepal presented a good passing play, looked comfortable on and off the ball just after the start, and prioritized on building the play from the back with a strong defense line.

Just as Nepal started to go higher up the pitch, Maldives looked more threatening on the counter attack and it got a chance with the tactics. Madhudee passed to Naiz Hassan, who showcased a tremendous change of pace, but his shot was brilliantly saved by Chemjong in the 49th minute.

Maldives got another chance two minutes later with a freekick, but it was again punched away to safety by Chemjong.

Nepal looked a bit shaky at the back after Maldives started hitting the losing side on the break. Tamang gave the ball away just near the box, and Nepal struggled to get back the ball, but Rohit Chand came to the rescue of the team and with a brilliant side push, he forced a goal kick in the 53rd minute.

Maldives never looked like a better team in terms of shots, possession and passes as most of the possession was in Nepal’s favor. Nepal controlled the tempo of the game, and also created more chances in the second half as well.

But, taking nothing away from its solid defense, Maldives built a defensive game and attacked Nepal when it got the chance. The strategy turned out to be fruitful as Nepal did not do well in the final third.

Nepal got several chances after the hour mark. Sujal Shrestha passed the ball to substitute Anjan Bista, who hit the shot that was headed by Magar taking the pace off the ball away and making it easy for the keeper to save in the 62nd minute.

Nepal got another chance instantly in the 66th minute as Bal hit a wide cross that was hit wide with Bista taking the flight off the ball.

Nepal then started prioritizing both the flanks, but it was either headed away by the defenders or saved by the keeper.

Instantly, Dinesh Rajbanshi’s cross into the box was headed by another substitute Nawayug Shrestha, but it was easily saved by the keeper in the 65th minute, while Bal’s long shot in the 68th minute was nearly in, but it hit the side netting.

Likewise, Rajbanshi’s cross was hit by Shrestha after a delightful turn, but the shot went way over the bar in the 72nd minute, while Shrestha missed a tap-in moment after that, which was the best Nepal chance in the game.

Maldives started building the play as Ali Fasir’s cross to Mohamed Irufan was wonderfully saved by Chemjong in the point blank range in the 75th minute.

Nepal then started looking fragile, made several defensive mistakes at the back, and saw Hassan score in the 84th minute banging the ball into the corner giving Chemjong no chance at all to even get his hands to it.

Nepal conceded again two minutes after that through Hassan as Abdulla Asadhulla dribbled past two Nepali defenders, gave a pass to Hassan and he dribbled past Chemjong to score.

Nepal got a chance to score a consolation as Magar’s shot from just outside the box was superbly saved by the Maldives keeper in the second minute of the four added on.

Pakistan presented a good game in the first half not conceding against a strong side like India, but switched off just at the start of the second half.

A brace from forward Manvir Singh helped India defeat Pakistan. Singh scored his first goal in the match assisted by Ashique Kuruniyan in the 48th minute scoring from the left side of the box with his right foot to the left bottom corner.

India pressurized Pakistan and created several chances in front of the goal. Singh bagged his brace in the 69th minute as he banged the ball into the top right corner from the right side of the box. India was quick in taking the ball to the other end in a counter attack and Singh was assisted by Vinit Rai.

India added the third in the 84th minute through Sumit Passi with a header from a close range to the right bottom corner assisted by Kuruniyan.

Pakistan pulled one back through Muhammad Ali scoring a right footed shot to the bottom left corner from just outside the box in the 88th minute.

India’s Lallianzuala Chhangte and Pakistan’s Mohsin Ali were sent off in the 86th minute for violent conduct.

India and Maldives will take on each other on Saturday.

Death toll in ferry accident rises to 18 in Bangladesh