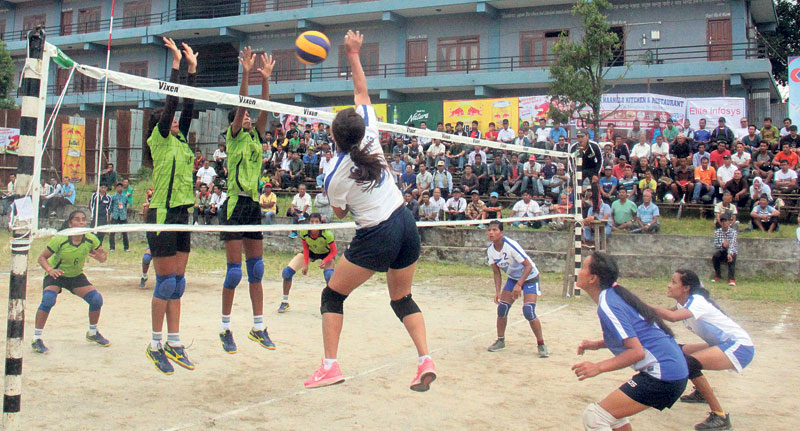 Players of Shreegaun (white) of Mid Western Region vie against Armed Police Force during their match of the National Women’s Volleyball Tournament at Lamachaur, Kaski on Friday.(Photo Courtesy: Nsc)

POKHARA, Sept 3: New Diamond Academy has always performed well in Lamachaur, Pokhara. Winning the National Women's Volleyball Tournament that is organized every year in Lamachaur on the occasion of Teej, for the record last three editions, New Diamond has made itself a popular volleyball club in Pokhara.

To lift the trophy for record three times, New Diamond had defeated APF in all of the last three finals. However it has never registered victory against the departmental team outside of Pokhara.

In this edition of the tournament organized by Nawa Adarsha Samudayik Bikash Samaj, New Diamond has made strong start and has advanced to the semifinal on Friday beating Tribhuvan Army in straight sets. However, New Diamond's coach Kumar Rai was not happy over the performance of his team.

“My players weren't as good as I expected today. They got confused over spiking as I had opted a new style,” said coach Rai.

Rai had assigned team's main spiker Pratibha Mali to fire shot from the open space which paid off in the first set. Army team lead by Nima Shrestha played two spikers to stop Pratibha's shot but couldn't trouble New Diamond in the rest of the game.

New Diamond won all three sets 25-11,25-17 and 25-15 against Army with the help of top performance from  captain Lalita Nath,  Kripa Adhikari and  Pratibha Mali.

With a win over Army, New Diamond has progressed to semifinal from Group A while despite losing the match Army also cemented its place in the last four.

Kripa, the setter of national team, said that despite the win the team was lacking combination between her and other spikers. Captain Lalita said that the team couldn't perform according to its level. “We had opted different playing style today so the team struggled to play according to the plan,” said Lalita.

In the match of Group B, APF defeated Shreegaun of Mid-Western in straight sets of 25-9, 25-10 and 25-12. Another match between APF and Western Region was disturbed by rain. The match which was being led by AFP 2-0 was stopped upon the request from Western Region.

APF coach Sudesh Kumar Rimal had sent second choice players to the court after winning two sets. Rimal had rested regular players Binita Budhathoki, Reshma Bhandaria and Nebika Chaudhary. APF is missing its main spiker Saraswati Chaudhary who is currently in Japan for training. However, coach Rimal said that the team will lift the title even in the absence of Saraswati.

New Diamond, APF, Western Region, Shreegaun and Tribhuvan Army Club are participating in the tournament which will conclude on September 4. Top two finishers of the tournament will be rewarded with Rs 75,000 and Rs 50,000 respectively.

SAINT-DENIS, France, July 4: The Icelandic thunderclap roar proved no match for the sheer talent of France as the hosts finally showed... Read More...