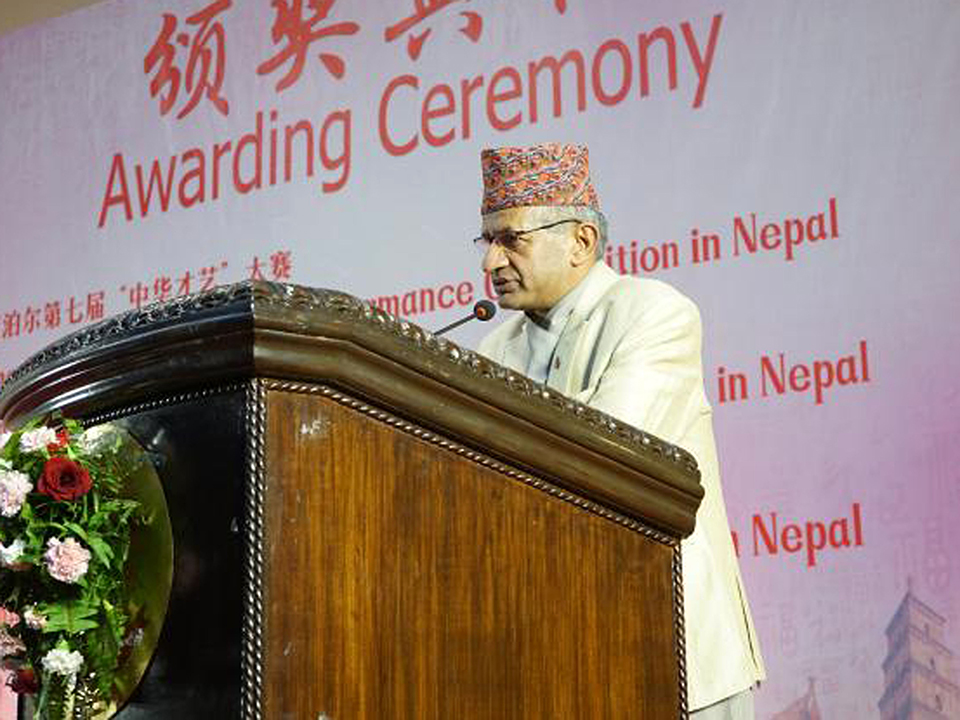 KATHMANDU, Sept 9: Minister for Foreign Affairs Pradeep Kumar Gyawali has said that Nepal and China are good friends and close neighbors, and the relation between the two countries is not only underpinned by interactions at political and official level but also at people to people level. The geographical proximity, cultural and religious similarities and frequent exchanges of visits at various levels have deepened the relations between Nepal and China, Minister Gyawali stated.

Minister Gyawali made such remarks during the awarding ceremony of the 8th Ambassador Cup Chinese Language Contest, the 7th Chinese Cultural Performance Competition and the 1st China in My Mind Painting Competition jointly co-sponsored by the Embassy of China in Nepal, the International Volunteer Chinese Teacher’s Home and Nepal-China Culture and Education Council with Chinese cultural characteristics in the capital city today.

Minister Gyawali also said that the students taking parts in such activities of cultural exchange would help deepen Nepal-China relations by bringing the two peoples together and added that they are truly the goodwill ambassadors for the promotion of relations between the two neighbors. He also expressed the confidence that such types of programmes at school levels among the students will have far-reaching impacts on understanding Nepal-China relations.

On the occasion, Chinese Ambassador to Nepal Yu Hong said that such events are instrumental to the cause of promoting China-Nepal friendship. Praising the painting skills and the understanding of Chinese cultures of Nepali students, Ambassador Yu said students’ mastery over the arts left her a deep impression. “With the continuous development of globalization, the trend of the mutual exchanges, appreciation and learning among human civilizations further deepens,” Ambassador Yu said. She added that China and Nepal are good neighbors, good friends and good partners stating that the two countries have a long history of exchanges and have been developing bilateral relations and cooperation in various fields on the basis of equality, mutual benefit and mutual respect bringing tangible benefits to the two peoples.

Yu further said that the cultural exchanges definitely further deepen the mutual understanding between the two peoples and solidify the foundation of public opinion for the traditional friendly relations between the two countries.

During the event, Minister Gyawali and Ambassador Yu jointly gave away the prizes to the award-winning students from elementary to high school. The outstanding winners include dancers, eloquent orators and painters sketching China in their mind from different schools. The organizers informed that 2,300 students from 201 schools participated in the three competitions. On the occasion, the students performed their dances and kung fu, sang Chinese songs. RSS