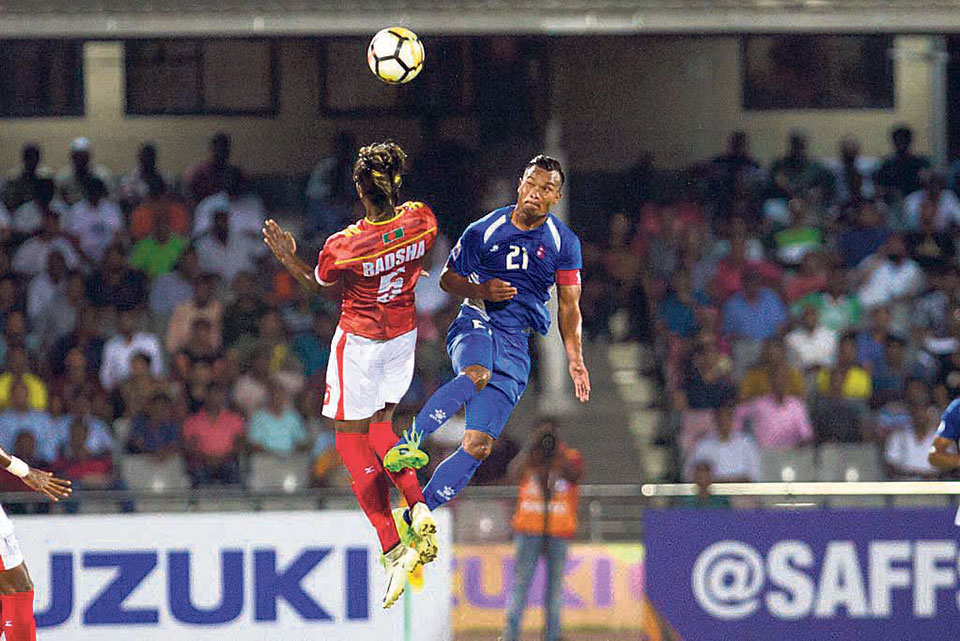 KATHMANDU, Sept 9: Nepal national football team has advanced into the semifinals of the ongoing 2018 SAFF Championship defeating the host Bangladesh 2-0 with an impressive overall performance in Bangladesh on Saturday.

Nepal was the better team in all the department as it controlled the tempo of the game, kept possession, and created more chances in front of the goal to win the deciding match after Pakistan had already defeated Bhutan 3-0 earlier on the day to book its semifinal berth.

In the third Group A match played at the Bangabandhu National Stadium in Dhaka, Nepal scored the first goal through striker Bimal Gharti Magar from a freekick in the 33rd minute, while it doubled its lead in the 90th minute to seal its place into the last four.

Nepal controlled the game with passing football, but failed to hold on to the ball in the beginning of the game. The first 10 minutes saw Nepal push the ball further up the pitch by retaining possession back.

The wings looked very poor from Nepal, and no players were able to get the ball inside the Bangladeshi box which affected the strikers as they got fewer chances.

While, Bangladesh looked threatening from the flanks and it got a chance in the 27th minute as Wali Faisal shot just went over the bar. The host put more crosses inside the Nepali box, but it defended quite well.

Nepal’s Sunil Bal, who has been one of the best players for Nepal in the three games, was fouled by Faisal in the 33rd minute. Magar hit the freekick straight into the Bangladeshi post. Bangladesh keeper Shahidul Alam Sohel could not handle the ball, and Nepal was awarded with the gift.

Nepal started creating more chances among which Bal’s freekick was headed out of the frame by Sujal Shrestha in the 36th minute, while Bimal’s shot from outside the box went too wide in the 38th minute.

Likewise, Nepal got yet another chance in the first half as Bal’s cross inside the box was not controlled properly by Shrestha in the 44th minute.

Nepal began the second half promisingly as well. Bangladesh’s Saad Uddin fouled Bal near the edge of the box and was yellow carded. But, the freekick was straightly saved by the keeper in the 49th minute.

Nepal took control of the possession in the early stages of the second half as well, broke the defense line often, but the final ball was missing that saw Nepal failing to score a goal.

Nepal got a glorious chance to double its lead inside the hour mark as Bharat Khawas had hit a curled shot that was saved by the keeper, with the rebound from Shrestha passed to Khawas again, who blasted his shot over the bar in the 54th minute.

Bangladesh then took charge of the possession near the hour mark, but kept attacking only from the flanks which troubled Nepal a little. Substitute Sohel Rana crossed the ball into the far post, but was comfortably saved by Nepal keeper Kiran Chemjong in the 57th minute.

It was a mix-match performance from Bangladesh as it could not hold the ball for long, and gave Nepal way too more balls in the final third.

Nepal substitute Anjan Bista looked promising in the start as he took the ball from the center line, dribbled past two to three defenders, played a passing play after the hour mark.

Then, Bangladesh prioritized the middle area to attack which made Nepal’s defense fragile and struggling. Bangladesh’s Faisal crossed the ball into the post, but Mohammed Shakawat Rony headed the ball over the bar into the top netting in the 70th minute.

Bangladesh made Nepal look fragile with its quick attack and also got more balls into the box in the last 15 minutes of the match. But, Nepali defenders and Chemjong defended quite well to deny them.

Nepali defender Kiran Chemjong, who scored the first goal of the game against Bhutan on Thursday, looked struggling in the second half and he gave the ball away with a miss header, but Rony’s follow-up shot went over the bar in the 79th minute.

Nepal thought it scored its second goal when substitute Nawayug Shrestha’s cross was volleyed poorly by Sujal Shrestha and headed in by Magar in the 80th minute, only to be flagged offside.

Nepal then scored the ultimate goal in the last minute of the normal time through Nawayug with a thumping shot from inside the box from a through ball which guaranteed that Nepal will play in the SAFF semifinals after missing out in the 2015’s edition.

Nepal will now take on the runner-up of Group B which will be decided after the last group match between India and Maldives on Sunday.

The runner-up of Group A, Pakistan, will play against the winner of the India-Maldives match.

KATHMANDU, Sept 5: With an away trip against Kuwait on Thursday, Nepal national football team will start its second round... Read More...

KATHMANDU, Sept 21: Nepal national football team has climbed up a position in the latest FIFA rankings of September on Thursday,... Read More...