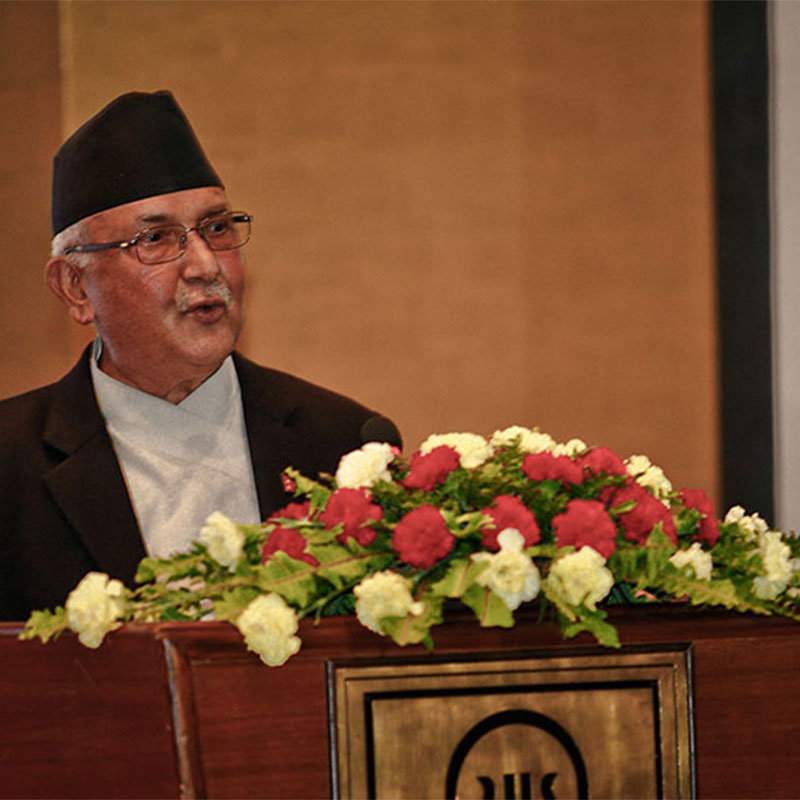 His backers may not openly characterize him as such, but a benevolent dictator is what they are looking for in KP Oli
I have watched with amazement the overnight transformation of my friends and acquaintances of diverse political persuasions into ardent KP Sharma Oli fans after India’s blockade last year. From college-going youngsters chatting in microbus to established bankers and professors I meet, they are all united by their loathing of India and the concomitant admiration for Oli, who is credited for single-handedly preventing the country from being ‘turned into Indian territory’. They seem to believe that had there been anyone else in Oli’s place, the country would have been sold down the river.

In Oli many see a reflection of King Mahendra, who, like the UML prime minister, made significant contribution in diversifying Nepal’s foreign relations away from India. It was Mahendra who opened the Arniko Highway with Tibet. It was Mahendra who placed Nepal on the international map and helped the country emerge from India’s long shadow. And it was him who popularized anti-India nationalism, the kind that Oli has now aced. This was also the same king who tried to homogenize Nepali society by imposing on it a set of monolithic cultural values and norms. So his legacy is decidedly mixed. But whatever his other failings, it is hard to fault Mahendra’s strategic acumen.

In his attempt to reach out to China, Mahendra was walking on the path charted by Prithvi Narayan Shah when he first described Nepal as a ‘yam’ between two giant boulders. Shah believed that the British rulers in India could never be completely trusted and Nepal needed to cultivate China as a hedge against the ‘firangis’ in India. With independent India more or less inheriting British India’s foreign policy, Mahendra rightly felt that the old dictum of the first Shah king of Nepal was relevant as ever. Coming to today, following the most recent blockade, the responsibility to restore that fine balance between India and China fell on KP Sharma Oli’s shoulders; and he did a fine job with it.

His UML party, as a result, could reap rich dividends in the three sets of elections scheduled for the next 17 months (or if and when they are eventually held). The sooner they are held, the fresher the public memories of the blockade and Oli’s resolute stand against India; and anti-India nationalism, UML reckons, is a foolproof electoral strategy. It is thus the only party that wants elections pronto. All the others are trying to delay them on various pretexts.

The populist surge
If Oli does manage to come back as prime minister—which is by no means certain given his frail health, the by nature unstable coalition culture, and his difficult relation with New Delhi of late—or even if he emerges as the leader of the largest political party in Nepal after the next general election, he will be riding a global wave of populism.

Donald Trump in the US has used the fear of “job-stealing” Mexicans—the “others” to be hated, just like Nepali nationalists have learned to hate everything Indian—to great success. Even if Trump loses in November, the anger and hatred he has been able to instill in common Americans will have an insalubrious impact on American polity for a long time. In Turkey, President Recep Tayyip Erdogan continues to tighten the screws on the opposition, the army and the free press in his attempt to consolidate power. If he stands for election today, he would again win, by a landslide. From Hungary to the Philippines, from Brazil to the United Kingdom, we have seen the rise of populism via the ballot box.

Nepal could be the next populist domino to fall. Not a few politicians we talk to in our line of work, from right across the political spectrum, hanker for a ‘benevolent dictator’. They seem convinced that Nepal, in its current stage of development, is unfit for democracy. This borrows from geostrategic thinkers like Robert Kaplan who believe the successful economic models pursued by once dirt-poor Singapore (under Lee Kwan Yew) and Malaysia (under Mahathir Mohamad) are instructive for other countries at lower stages of development. Kaplan sees Singapore as a brilliant case of benevolent authoritarianism, while he attributes only partial success to Mahathir’s Muslim-religion-based, state-led development.

Yet both Lee and Mahathir were able to give their societies the much-needed order so that they could then pursue their development goals. Yet Singapore and Malaysia are largely homogenous societies, with clear dominance of one ethnic group, which makes them easier to govern. An ethnically diverse country like Nepal, by its nature, is hard to rule. In Kaplan’s view, if a country is ethnically as well as geographically diverse—Iraq, Libya and, one would assume, even Nepal—governing them can be devilishly difficult and they can as such be held together only by brutal dictators like Saddam Hussein and Muammar Gaddafi.

So the benevolent kind like Mahathir and Lee Kwan Yew just won’t do in Nepal. Nor is there any chance of emergence of a totalitarian like Saddam Hussein, if we at all want such a leader. So our only remaining option is to try to find solutions from within the democratic framework, however difficult the quest.

In the case of Oli, his supporters may not openly characterize him as such, but a benevolent dictator is precisely what they are looking for in him: a Mahendra-like nationalist who can give order to the society, and who does not bow down before India, the ‘arch-enemy’. But should the strength of his opposition to a certain country be the sole criteria with which to judge a leader? Surely, his track record back home and his accountability to his own people should count for more.

The realist ebb
If so, it is hard to see how Oli can be the answer to Nepal’s present-day problems. Under his reign syndicates and cartels flourished, as did the medical mafia. The prices of daily necessities rocketed, partly due to his populist budget. Important state organs, even the judiciary, were packed by party apparatchiks. He also seemed determined to alienate marginalized communities like Madheshis and Janjatis to cultivate his core constituencies.

Notwithstanding his authoritarian bent, King Mahendra at least had a broader vision for the country, which also reflected in his desire to diversify Nepal’s external engagements. Oli, on the other hand, seems to be driven primarily by electoral calculations, which isn’t entirely surprising. Unlike Mahendra, a hereditary monarch, Oli, a career politician, has to perforce worry about being elected again. Such vote-bank logic also explains Oli’s sudden transformation from one of India’s most trusted point-men in Nepal to perhaps its biggest foe here.

Yet even by the standards of a career politician, it is hard to see how a divisive figure like Oli, and one so versed in the old pork-barrel politics, could chart the way for the kind of inclusive and egalitarian New Nepal envisioned by the new constitution.

No confidence motion registered against Oli

KATHMANDU, July 13: A no confidence motion has been registered against Prime Minister KP Sharma Oli in Parliament on Wednesday. Read More...

Prior infection, vaccines provide best protection from COVID
22 minutes ago

Westerly wind likely to cause rain, snowfall
52 minutes ago