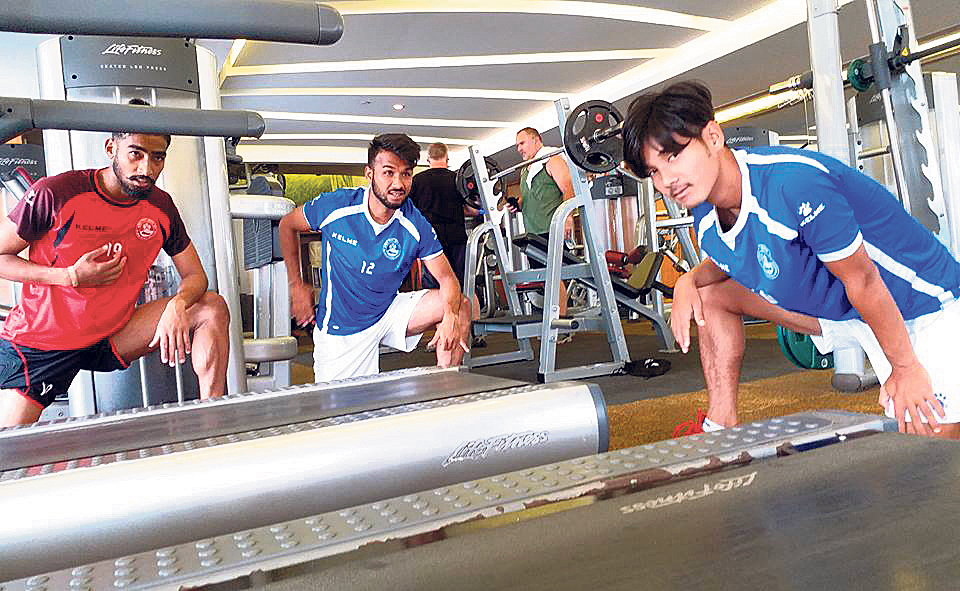 KATHMANDU, Sept 8: Nepal national football team registered the first win of the 2018 SAFF Suzuki Cup with a 4-0 thrashing of Bhutan on Thursday that kept the team in contention for the semifinals of the tournament, with still a lot to do against the host Bangladesh on Saturday that has won both its games so far.

Nepal had suffered a loss on the first day of the tournament with a 2-1 defeat at the hands of Pakistan on Tuesday but recovered tremendously against a 10-man Bhutan side that looked really slow and fragile from the beginning. Nepal had lost the first match of the 2015 edition of the tournament as well.

Nepal now has won a Suzuki Cup match for the first time since 2013 when it defeated its arch-rival India 2-1 in the last Group A match on September 5.

Nepal is now taking on the Bangladeshi team that is full of confidence after its two back-to-back wins against Bhutan and Pakistan, and just a point will be enough to get it to the semifinals of the tournament.

To ensure its chance to go through, Nepal should defeat Bangladesh. A win against Bangladesh will send Nepal to the semifinals based on the superior goal difference over Pakistan, whereas Nepal will only need to draw if Pakistan plays a draw against Bhutan in the early kick-off of the day.

Nepal head coach Bal Gopal Maharjan who claimed that his side is ready to win the SAFF title after a disastrous Asian Games campaign in which his teams lost against Japan, Vietnam, and Pakistan, but also suggested that SAFF is a completely different territory and that they are a title contender.

Delighted Maharjan after the Bhutan win, said that he is quite happy with the victory and they will now focus on winning the crucial match against the host Bangladesh to reach the semifinals, which the team failed to do in the 2015 edition of the competition.

“I am very happy with the result. We are confident after the win and we will now have to defeat Bangladesh in order to reach the semifinals,’’ Maharjan said.

Maharjan had expressed his confidence of playing attacking brand of football in Bangladesh.

Also, Maharjan prioritized his side with attacking approach in both the games and set pieces were a pivotal aspect of his game.  The possession-based football which Maharjan stressed on playing in Bangladesh has been a treat to watch, but the problems within the team are how it leaves a lot of gaps while going out for attacks.

“We will concentrate on attack and the midfield is very vital for that. We have chosen midfielders who can play swift and tactical football,” said Maharjan. “We will also make tactics as per the style our opponent plays. Passing and attacking football is our style, and we will focus to keep possession with us.”

So the tactics in both the games were spot on, and the only aspects that need correction are to cover the pockets of space left by defensive midfielder Rohit Chand and fullbacks Suman Aryal and Dinesh Rajbanshi while going out for an attack.

The second goal it conceded against Pakistan was a prime example of how the defense struggled to tackle the speed of Pakistani defense from the space it left, while Bhutan also threatened Nepal many times from the flanks when Aryal and Rajbanshi concentrated on their attacking responsibilities.

This time, Bangladesh is a much stronger opponent than both Pakistan and Bhutan, and considering the support it will get from its home crowd, Nepal will have a difficult day.

Nepal’s Nirajan Khadka and Sunil Bal were excellent in both the games, while midfielder Sujal Shrestha, who played at the wings, will be pivotal to Nepal’s bid of reaching the last four.

Striker Bharat Khawas came on the pitch for struggling Anjan Bista against Pakistan, while other forward Nawayug Shrestha was not even used against Bhutan after his poor performance against Pakistan.

So, the forward line might comprise of Khawas, Bimal Gharti Magar and most probably Bal, while Shrestha, Khadka, and Chand will lead the midfield line for the 1993’s third-placed side.

The defense will most likely be the same with Rajbanshi and Aryal on the flanks, and Ananta Tamang and Aditya Chaudhary in the center of the defense. Nepal can also play captain Biraj Maharjan instead of Rajbanshi, but considering the fact that Rajbanshi was really good against Bhutan, he might start again too.

Nepal will be looking for all three points on Saturday, and if Nepal beats Bangladesh with a three-goal margin, and Pakistan defeats Bhutan with a goal or two, Pakistan and Nepal will go through ahead of Bangladesh on superior goal differences.