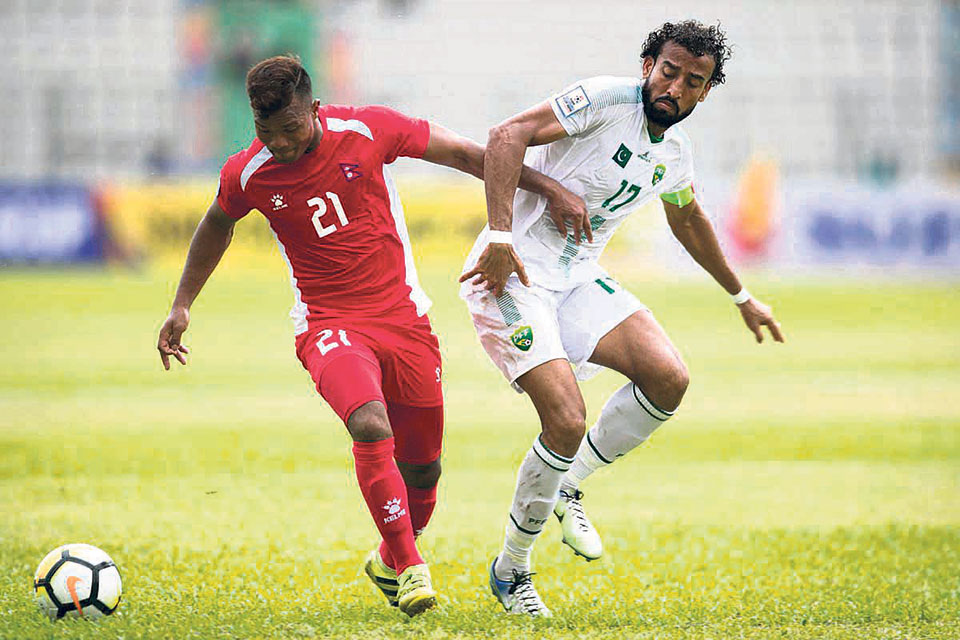 KATHMANDU, Sept 5: Nepal national football team started the 2018 SAFF Suzuki Cup, also known as the SAFF Championship, on a losing note as it suffered a 2-1 defeat at the hands of Pakistan in Bangladesh on Tuesday.

In the first Group A match of the 12th edition of the tournament played at Bangabandhu National Stadium in Dhaka, Nepal conceded a 96thminute winner from Pakistan’s Mohammad Ali Dabous despite equalizing in the 82nd minute through Bimal Gharti Magar.

Pakistan had scored the first goal of the curtain raiser from the penalty spot through Hassab Basir in the 36th minute.

The story in both the halves was the same as Nepal took control of the possession, controlled the midfield on several occasions, but failed to perform well in the final third.

Also, a lot of long balls were intercepted by the Pakistani defense line and Nepal could not send a telling ball inside the box to break Pakistan’s defense.

There were a lot of movements in the wide positions, but the crosses were easily thwarted by the defenders and the Pakistani keeper Yousuf Butt, who double saved Nepal’s shots from Sunil Bal and Sujal Shrestha.

Pakistan was rewarded the penalty after Nepal captain Biraj Maharjan unnecessarily pushed Riaz in the box.

Bassir was comfortable taking the spot kick and he coolly converted it hitting the ball in the left bottom corner.

Once Nepal conceded the first goal, Nepal played under pressure and could not send the ball forward at all with the losing team playing a lot of backpasses and sideways passes which created a gap between the midfielders and the forwards.

Nepal looked comfortable with the ball in the second half and the first chance came to the team in the 48th minute.

Nawayug Shrestha hit a shot which was deflected and fell to Rohit Chand’s path who passed to Ananta Tamang, whose volley went straight at the hands of the Pakistani keeper.

Moments after that, Pakistan started to press harder up the pitch, propelling Nepal to make mistakes and push forward to run through the gaps left by the losing team.

Pakistan did not get much shots in the second half, but did not let Nepal take control of the possession as well.

Debutant Suman Aryal looked promising on the ball and his crosses looked good. His cross in the 53rd minute was headed away by the defender.

Nirajan Khadka, who returned to the national team after five years, came in the pitch in the latter stages of the second half. His shot, which was on the target, hit Aryal in the 71st minute.

Pakistan kept on pressing hard against Nepal, who was playing with intense defense line.

Pakistan eventually got the chance with the same tactics after Chand made a mistake and gave the ball away to substitute Saadullah Khan.

Khan hit a shot from 40 yards, which rattled the top bar after keeper Kiran Chemjong made a fingertip save to it.

Nepal finally got the equalizer lofting the ball into the net after substitute Khadka provided him with a clever headed pass inside the box in the 82nd minute.

Nepal got several chances after scoring the goal, but could not utilize any. Center back Ananta Tamang got a ball just outside the danger box, and he hit the ball just wide of the target three minutes after leveling the match.

Likewise, Nepal looked like scoring a winner as Bal hit a strong shot, but it was saved by the Pakistani keeper, and the follow up was shot by Shrestha, which was acrobatically saved by the keeper again.

The save turned out to be a crucial one as Pakistan went on to win the game.

In the sixth minute of the added time, Pakistan got a counter attack. Muhammad Adil sent a long cross to Saadullah who gave a headed pass to Dabous, who headed the ball in to break Nepali hearts.

With the loss, Nepal has failed to win the curtain raiser of the tournament for the second straight time. It had lost 1-0 to Sri Lanka in 2015.

In the other match played on the same day at the same stadium, Bangladesh registered a 2-0 win over Bhutan to top the group.

Bangladesh took the lead through Topu Barman from the spot in the third minute of the match, while it doubled its lead just after the restart in the 47th minute through Mahbubur Rahman Sufil.

Nepal will now play against Bhutan as both the teams are looking for their first wins, while Bangladesh will play against Pakistan for the potential top spot of the group.

Both the matches will be played on Thursday.

India will take on Sri Lanka in the first Group B match on Wednesday. 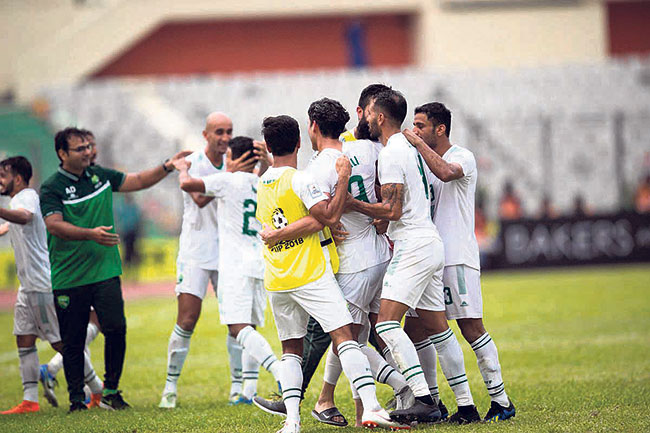