49 Nepalis die of COVID-19 worldwide, around 2000 infected as of Sunday 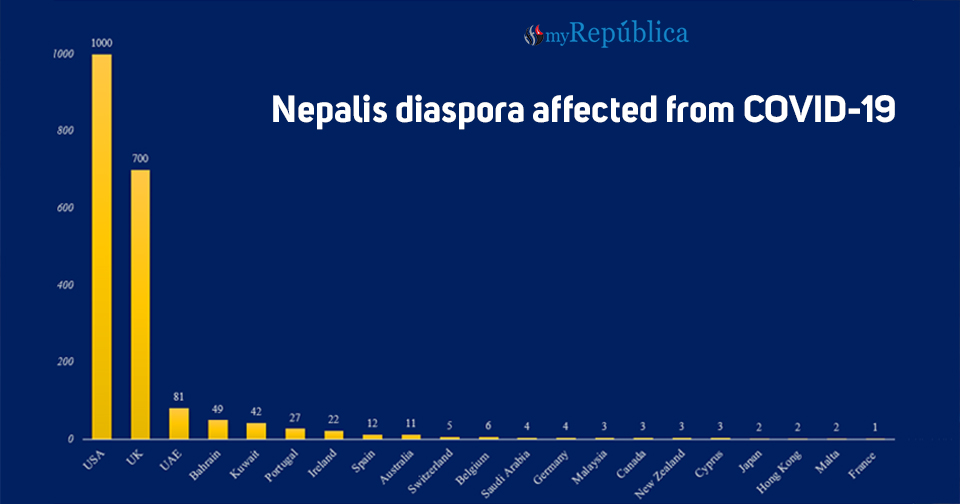 KATHMANDU, April 27: As of Sunday, 49 Nepalis living in 24 different countries have lost their lives due to the coronavirus.

According to the NRNA, 1,983 Nepalis have tested positive for the deadly virus across the globe. Of them, 1000 are in the US, 700 in the UK, 12 in Spain, 81 in the UAE, 49 in Bahrain, four in Germany, 27 in Portugal, 22 in Ireland, 11 in Australia, six in Belgium, four in Saudi Arabia, 42 in Kuwait, and one in France, two in Japan, three in Malaysia, three in Canada, three in New Zealand, three in Cyprus Myanmar, two in Malta, one in France and two in Hong Kong have been infected by the virus. Fifty two persons in Nepal have been infected by the virus. A total of 434 Nepalis living in various parts of the world have recovered from the disease so far.

16 patients have returned homes after recovery inside Nepal.

The NRNA compiled the figure of Nepalis hit hard by the virus based on the information provided by Nepali doctors in foreign countries, Nepali diplomatic missions abroad, NRNA branches and local organizations, stated the press release.

The NRNA has distributed relief materials to Nepalis affected by the virus in over two dozen countries. It has also mobilized its 42 chapters to provide relief to NRNs.

Number of Nepalis dying of coronavirus in foreign countries reaches 130

KATHMANDU, April 19: As of Saturday, 28 Nepalis living in 21 countries have lost their lives due to the coronavirus. Read More...