US women beat Chile in warmup for World Cup qualifying 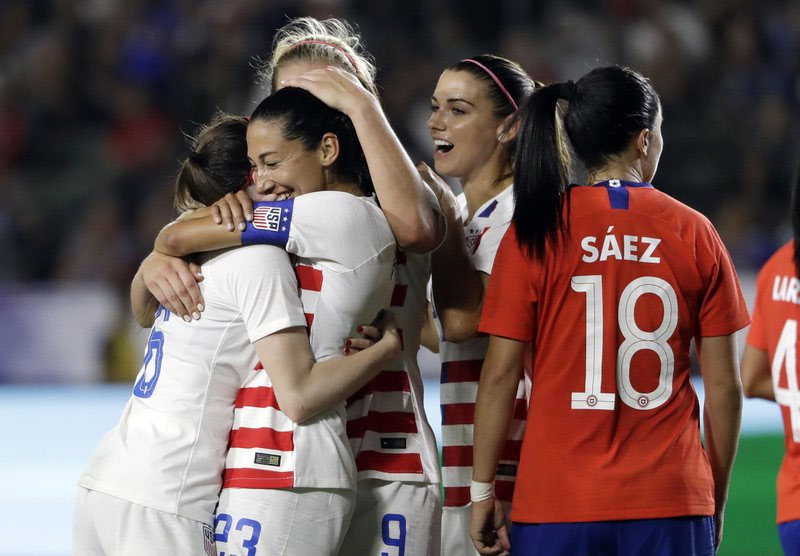 Four weeks after winning the Tournament of Nations in Illinois, the Americans looked fairly sharp in their first-ever meeting with Chile in front of a large and lively Southern California crowd.

“This was a good game in terms of our preparation for qualifiers,” coach Jill Ellis said. “It was two good halves. But I think we’ve got room for improvement.”

The U.S. improved to 17-0-3 since last year’s Tournament of Nations. Ellis used 17 players and experimented with combinations in this comfortable friendly for the world’s No. 1-ranked team. Those experiments should yield results that will aid Ellis’ preparations for games that matter against tougher opponents.

The sides will play another exhibition in San Jose on Tuesday in the Americans’ final warmup match before the start of World Cup qualifying in early October.

“When you’re planning for a tournament or for World Cup qualifiers, you want to put a lot of clubs in your bag,” Ellis said. “There are just things that players have to execute in a game to get a feeling for it.”

Chile is already ticketed for its first World Cup next year due to its second-place finish in the Copa America, but the Americans demonstrated superior speed and organization from the start. The U.S. went ahead early when the 19-year-old Davidson got her head on Tobin Heath’s corner.

The U.S. extended its lead on a Chilean own-goal, and Press scored on a tap-in in the 59th minute. Press also had two apparent goals taken off the board by a zealous American referee, disappointing a near-capacity crowd of 23,544 at StubHub Center, the team’s most frequently used home venue. The crowd was the second-largest to see the U.S. women this year.

Davidson, who is fresh off an NCAA title at Stanford, is getting regular call-ups this year as the youngest player on the U.S. roster. She is only the second teenager since 2013 to play for the team.

The U.S. went up 2-0 in the 32nd minute when Chile defender Carla Guerrero blocked Julie Ertz’s header with her chest, but couldn’t stop the ricochet from crossing the line.

Before the game, US Soccer recognized Press, who grew up a short drive from Carson, for becoming the 37th woman to play in 100 matches earlier in the year.

Press, who wore the captain’s armband, then caught Julie Foudy for 13th place in team history with her 45th career goal — but only after having two scores denied by the officials.

Press converted a penalty in first-half injury time, but the goal was waved off. In a curious interpretation of soccer rules, the referee made the call because Crystal Dunn had committed a foul at the top of the box before the kick.

“It was really weird after the penalty,” Press said. “I thought it was a goal. No idea what happened, and then (the Chileans) were off transitioning. No time for explanations, and then we were off to halftime. I think the focus for us was just to raise the level and bring more quality.”

Press then banged home a clean header off Davidson’s corner kick in the 56th minute, but it too was waved off, apparently for an unrelated foul in the box.

Megan Rapinoe is skipping both friendlies against Chile to rest her injured rib from NWSL play.

UCLA defender Hailie Mace made her second career appearance for the U.S. as a second-half substitute.