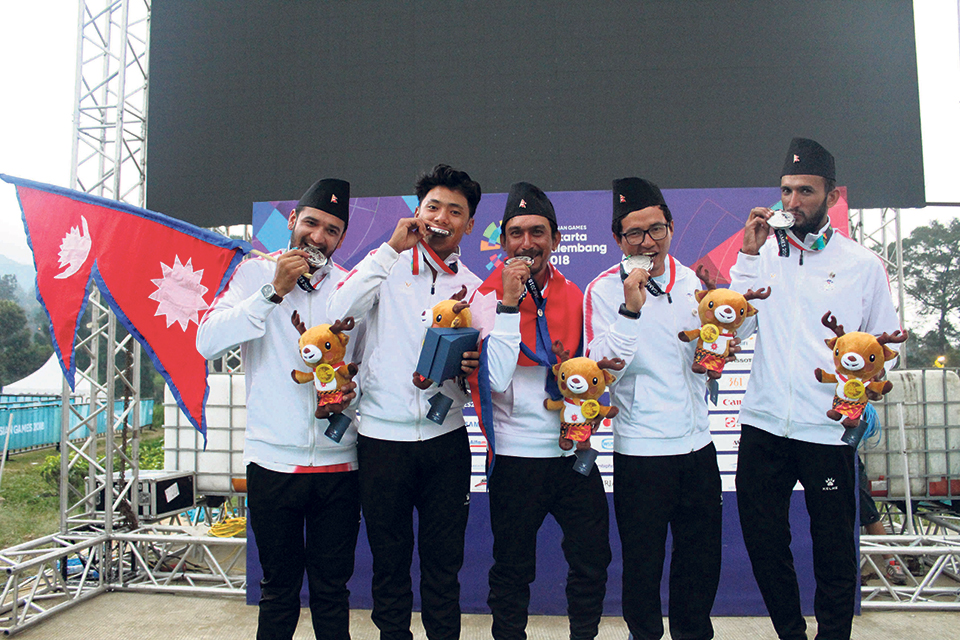 Members of Nepal’s men’s paragliding team pose with their medals after winning silver medal at the 2018 Asian Games in Jakarta, Indonesia on Wednesday. | Photo Courtesy: NSC

POKHARA, Aug 31: It has transpired that the Nepali paragliding players, who won the silver medal at the Asian Games -- Nepal's first and only medal in the sports jamboree so far -- had to bear the financial burden of all the equipment by themselves. Equipment for the two events, cross country and accuracy, cost the players almost Rs 1.4 million, which they managed through personal loans.

Even though the government had provided food and shelter to the players, they were without any equipment or money to buy them.

The equipment like glider, harness, GPS, radio set, barometer, electronic compass, gloves, helmet, and others are necessary for paragliding flight. The purchase of a set of equipment for one category had cost the team about Rs 700,000.

According to the pilots, the paragliding flight is said to be very costly as the flights are taken by purchasing all these equipments at once.

The medal won by the paragliding team on their Asiad debut was the first silver medal for Nepal in 20 years at the Asian Games.

"We have won a medal for the country by taking heavy loans," Bijay Gautam, one of the Nepali paragliders, told Republica. "At the surface level, the game may look ordinary, but it is an expensive game. It needs bravery, of course, but technically it is very expensive."

"I took a total of Rs 1.4 million in loan to buy two sets of paragliding equipment. While I had some money with me, I managed the remaining from local cooperatives by mortgaging my land," Gautam said. "We got the medal for the country, but I also got indebted in loans."

He further explained that he wanted to participate at the Asian Games regardless of the financial burden so that he wouldn't miss the opportunity when the government had finally recognized paragliding as a sport eligible for the Asian Games after two decades.

"We have fulfilled our responsibility. Even though we had targeted to win the gold medal, we could not do it because of some problems. We are happy that we could at least break the two-decade-long medal-less journey at the Asian Games," Gautam further added. "We have showcased our capabilities in Indonesia, and it is a different matter whether the government takes us seriously or not. I hope the government will surely understand our condition."

He also said that he took chance in covering all the expenses by himself as the government had not recognized the game in previous international tournaments.

"The country purchases the sports equipment for other games. They are not that costly, but in case of paragliding, we players had to buy all the equipment by ourselves," Gautam added.

The other national player Bishal Thapa said that he is not in a financially stable condition. "The government has given paragliding as international status just now. We have been ignored until now, let’s hope we’ll get attention from the government," Thapa said. "Now we will return to Pokhara for our commercial flights and pay the loans on installment. I am not financially stable to pay back all the loans at once."

Import of sanitizer sees a significant decline in the first two months of the current FY
11 hours ago
U.S. offers payments, relocation to family of Afghans killed in botched drone attack
15 hours ago

British lawmaker stabbed to death in 'terrorist incident'
11 hours ago