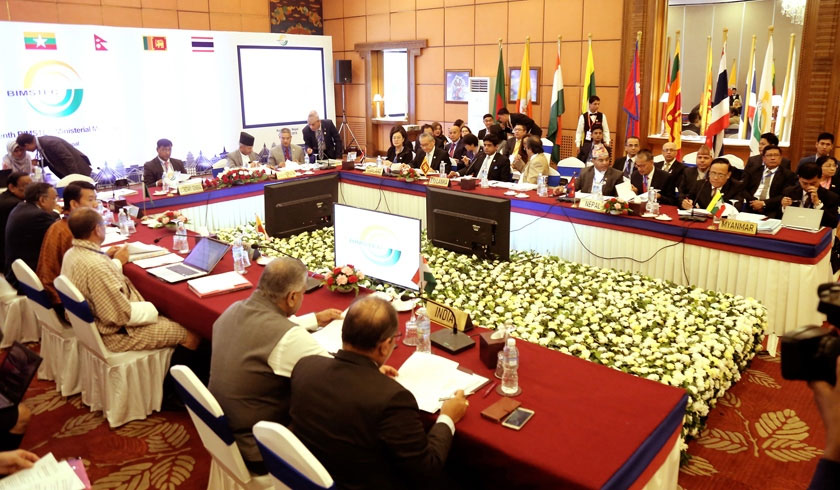 KATHMANDU, Aug 29: The 16th ministerial-level BIMSTEC meeting held in Kathmadu on Wednesday endorsed the text of draft Summit Declaration and recommended that to the leaders of the BIMSTEC member states for approval.

In the meeting, the ministers expressed their readiness to sign the Memorandum of Understanding on the Establishment of BIMSTEC Grid Interconnection.

The ministerial meeting also reviewed the whole gamut of cooperation under the BIMSTEC and decided to further consolidate regional cooperation process. The Ministers reiterated their commitments to make BIMSTEC process more effective and result-oriented.

The Meeting also discussed the status of the progress and achievement in the fourteen areas of cooperation under BIMSTEC.

Minister for Foreign Affairs Pradeep Gyawali, in his opening remarks, stated that the BIMSTEC is a unique regional platform because of its history, geographical contiguity, great civilization links and existence of potentials that can contribute to transform it into a prosperous region.

Foreign Minister Gyawali also underlined the need to deepen rather than proliferate areas of cooperation and called for rationalizing the priority areas and focus on connectivity, trade, tourism, energy, and agriculture

Meanwhile, the Secretary General reported the progress made to finalize the draft texts of a few new agreements that included the Agreement on Cooperation and Mutual Assistance in Customs Matters, BIMSTEC Motor Vehicle Agreement, BIMSTEC Coastal Shipping Agreement, and The draft text of the Trade Facilitation Agreement.

As per the BIMSTEC practice, the Foreign Minister of Nepal handed over the chairmanship of the BIMSTEC ministerial meeting to the State Minister for Foreign Affairs of Sri Lanka.

The Ministers appreciated Sri Lanka for acceptance to assume the next Chairmanship of BIMSTEC Ministerial Meeting.

The leaders of the delegation urged for the early operationalization of the established mechanisms and BIMSTEC Centers.

The seventeenth ministerial meeting will be held in Sri Lanka.

KATHMANDU, Aug 28: The meeting of the senior officials, including the foreign secretaries, of the member countries of Bay of... Read More...

KATHMANDU, Aug 22: The foreign affairs experts and former diplomats have said one of the major focuses of the BIMSTEC... Read More...