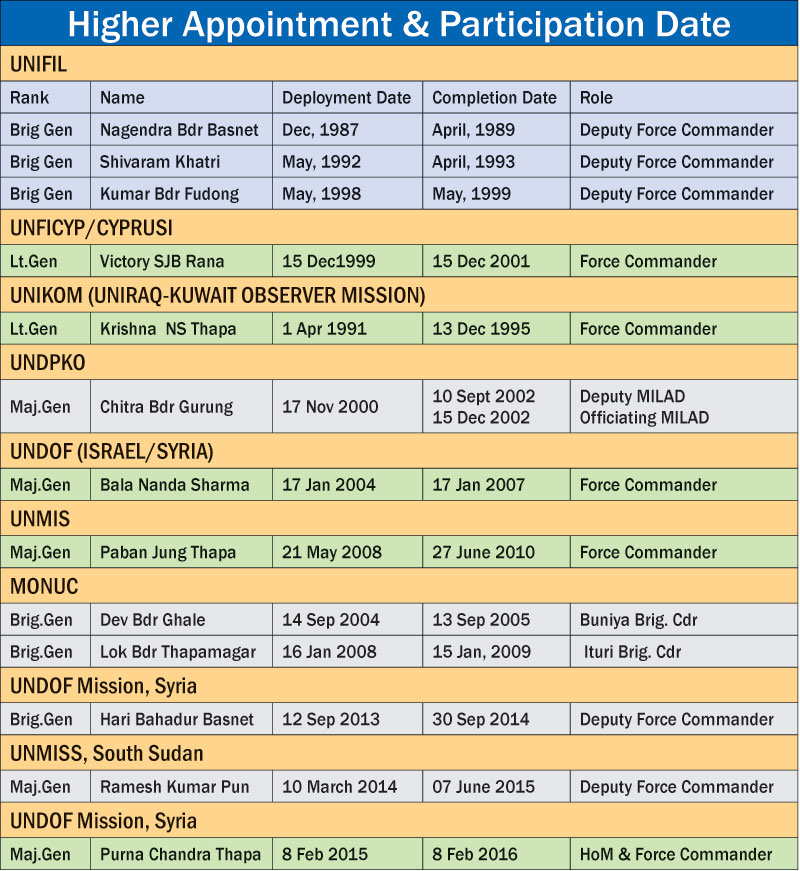 KATHMANDU, Sept 1: The Nepal Army has drawn the attention  of the United Nations to its under-representation in senior command positions in UN peacekeeping missions despite its continuous contribution to peacekeeping over 60 years and its record of high credibility and sound performance.

During the recent visit here by Under-Secretary General (USG) Atul Khare of the UN Department of Field Support, the national army expressed serious concern via different forums over the under-representation and sought ‘justice’ for its contributions going back to 1955.

NA’s contribution in establishing peace in critical conflict zones across the globe has been highly acclaimed. “We have been competing for vacant posts at higher levels of command in UN missions but have not been able to land those opportunities for lack of sound diplomacy and adequate government and political interest, among other things,” senior NA officials said.

In 2016 alone, NA competed for higher command positions with missions based in Mali, Lebanon, Sudam, Liberia, South Africa, Central Africa and Cyprus, according to NA’s Directorate of Peacekeeping Operations.

According to the Directorate, in none of the competitions was the Nepal Army able to get selected although the chances would have been high in terms of performance and competence.

According to Brigadier General Tara Bahadur Karki, spokesperson of the Nepal Army, NA  has held only a few higher level appointments--five as Force Commander, six as Deputy Force Commander and two as Brigade Commander-- in the entire period, even as Nepal at present is the sixth largest contributor to UN peacekeeping missions.

NA has said that Chief of Army Staff Rajendra Chhetri repeatedly stressed the issue and sought representation in senior posts in proportion to its contributions in different conflict zones. USG Khare, on behalf of the UN, assured that the issue would be raised with high priority at upcoming forums.

Brigadier General Suresh Raj Thapa, who heads the NA’s Directorate of Peacekeeping Operations, said, “We have contributed our troops as and when required and even during times of manpower crisis and we have been repeatedly acclaimed by the UN.”

As per the government’s decision,  NA has assured the UN of contributing 10 percent of its total strength (approximately 10,000 personnel). As of Aug 28, 2016, NA has deployed 4,416 personnel including contingents, observers and staff officers, in 15 different missions.

NA’s Birendra Peace Operations Training Centre (BPOTC), which trains NA personnel for service in peace-keeping operations, has been training a rapid deployment battalion and a special force to be deployed as required by the UN.

NA has also been exploring other possible areas of contribution to meet its expectations of becoming the fifth largest contributor to UN missions in near future.

At present, Bangladesh is the top contributor to UN peacekeeping missions, followed by Ethiopia, India, Pakistan and Rwanda in that order.

Experts concerned, who declined to be named, said, “Nepal would have been in a more comfortable position in the UN if it had had more political stability, necessary initiatives were taken by stakeholders to offset the influence of powerful countries and the UNMIN had lobbied positively at UN headquarters.”

Rapid Diagnostic Test not reliable: WHO Nepal Office
14 hours ago