Children compelled to cross raging monsoon river to get to school 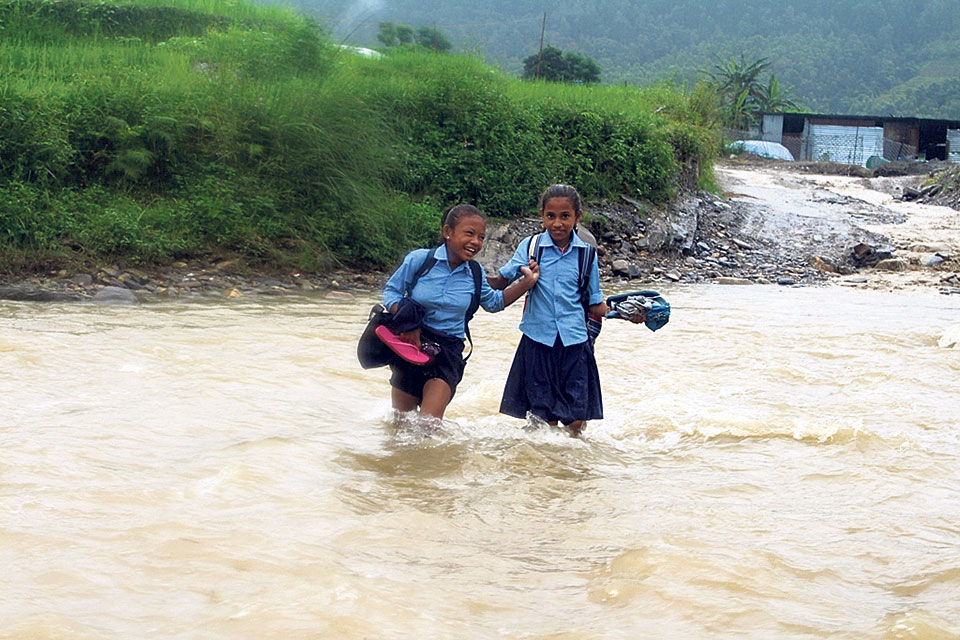 GORKHA, Aug 19: Samir Miya, a ninth grader at Krishnajyoti Secondary School, Gankhu, is unable to go to school for the past three days, as he cannot dare to cross the swollen Jarang River. It had been just two weeks since his school resumed after the monsoon vacation. Despite his will to go to school and continue his studies, he is unable to do so, thanks to the flood triggered by torrential rainfall. The continuous downpour has raised the water level of the river preventing him from going to school.

“It becomes challenging for us to get to school by crossing the swollen river in monsoon,” said Miya adding, “We try to cross the river but it’s risky. So, we choose to return home without going to school.”  However, this is not the first time these students have been prevented from going to school. Students of Bhimesn Thapa Rural Municipality-1, Nibel, go through this ordeal every year in monsoon.

There is only one school in Nibel where students can study up to the fifth grade. Therefore, students studying in grade six to 12 have to go to Krishnajyoti Secondary School by crossing the river. Reaching the school is a problem only during two months of monsoon. Nirajan Thapa, an eighth grader in the same school often skips his classes due to rain. Concerned about their children’s safety, even parents do not force their children to go to school by risking their lives.

It has been more than a year since the construction of a concrete bridge over the Jarang River started, but the project has not gained much progress. There is a suspension bridge in the village but it takes more than an hour for students to reach school from that bridge. As the way is a bit slippery and steep, children often fall and are injured.

“Going through the suspension bridge consumes a lot of time and the way is steep and difficult for us,” said Nirajan.

As teachers are aware about the situation, they do not punish the students for missing school. At other times, when the level of water is low in the river, students jointly cross the river by holding each other’s hands.

Sometimes, their parents help them get across the river. “There is continuous rainfall and the water level is rising day by day. Being aware of the situation, we cannot force our children to go to school,” said Kaji Thapa, a parent.

Delay in the construction of Jarang Bridge has left the locals no option other than risking their lives by crossing the same river.

Govt to do all it can to boost security personnel’s morale: Home minister

KATHMANDU, Dec 4: Home Minister Bal Krishna Khand has said the government would do its best to help raise the... Read More...

KALIKOT, Dec 4: The Karnali Corridor has been blocked due to a dry landslip in Lapha of Pachal Jharna Rural... Read More...

Nepse inches up 2.16 points as daily turnover soars to Rs 1.56 billion on Sunday
4 hours ago

Govt to do all it can to boost security personnel’s morale: Home minister
5 hours ago