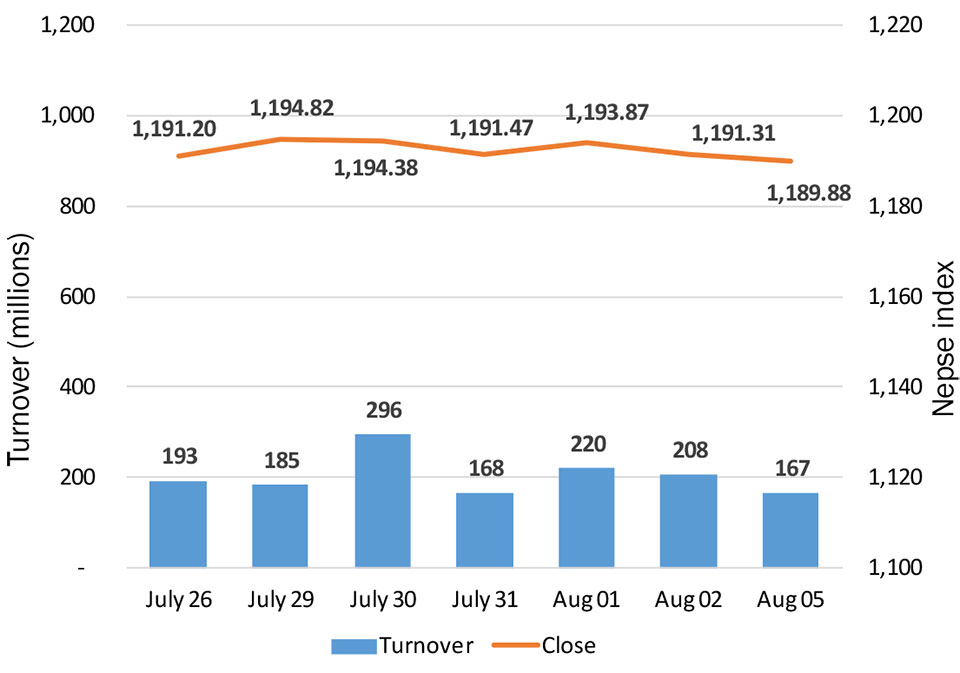 KATHMANDU: Stocks opened the week on a strong note and maintained a positive bias for the initial trading hour on Sunday. However, the benchmark Nepal Stock Exchange (Nepse) index failed to hold to the gains and pulled back mid-day to close slightly lower. At the end, Nepse dropped 1.43 points to close at 1,189.88 points.

Market activity has slowed down further with the decline in the index. Investors are yet to come out of the cautious stance which they have been maintaining since the start of the Fiscal Year 2018/19.

Most of the listed companies are yet to publish their year-end earnings reports which might also be contributing to the insipid sessions seen lately. On Sunday, just over Rs 167 million worth of shares were traded in the secondary market.

Sectoral indices also reflect the broader market, posting in slight movements on either side of the spectrum. 'Others' sub-index posted the highest gain of 0.92 percent followed by Development Bank sub-index which closed higher by 0.79 percent. Sub-indices of Hotels, Life Insurance and Microfinance groups edged slightly higher. Meanwhile, Manufacturing & Processing stocks were under pressure on the day as its sub-index fell 0.91 percent. Non-life Insurance index also slid 0.53 percent. Similarly, sub-indices of Hydropower, Banking and Finance groups also closed the day's trading in red.

Technical analysis by ARKS suggests that the Nepse index is yet to come out of its sluggish movement of late. The market trending below 1,200-point level with dismal activity further enforces the fact. In the present context, the market is likely to prolong its sideways movement.