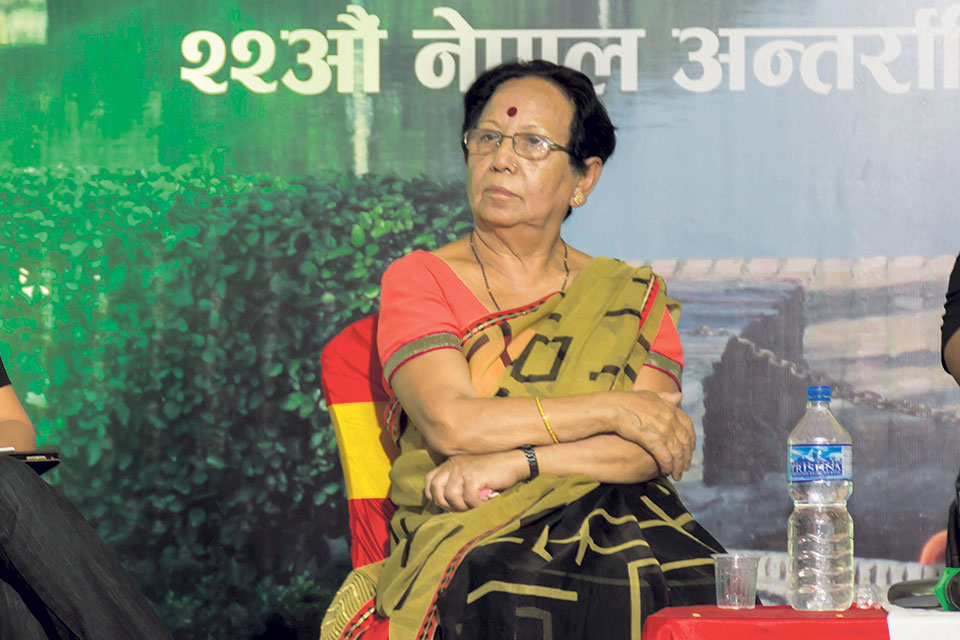 Maya Thakuri, a renowned and celebrated woman writer of Nepal, claims that she has never received any formal education. She describes her journey of writing as a revolution and a struggle to achieve what many women like her have been deprived of.

At the age of 15, she could barely write a sentence. Now, she has a collection of seven anthologies in Nepali and one in English. Her stories have also been translated in English, Hindi, Bengali, Tamil, and are a part of student’s curriculum in various universities across India and Nepal.

Thakuri says when she was a teenager she fortunately found someone who was willing to teach her for free. “I had never imagined I would be known as a writer. I was more interested in singing as a child,” says Thakuri who came to Kathmandu for the first time from India to perform at King Mahendra’s birthday. After that, she visited Kathmandu a few more times for work and then eventually got married in the city.

Thakuri has written extensively about prejudices that revolve around women’s lives. She is also known for her stories that deal with the marginalized sections of our society, their difficulties and subjugation. Her most renowned creations are Ama Januhos, Najureko Jodhi, Of a Lesser God, Priyambada, etc.

She says that she wants her pen and her words to be the voice of the unheard and a catalyst for change as well. She also encourages many women like her to raise their voices and not be scared of the society and its preconceived notions.

“No one is going to hold your hand and ask you to rise. You have to fight for yourself and defend yourself,” says Thakuri addressing many young women and girls. According to her, direct and indirect discrimination against women and girls are still prevalent in our society. This makes it difficult for young and determined professional women to succeed. But, according to her, women should take these hindrances as challenges and become the pioneers of change at their own individual level. She says the hurdles should not deter you but rather motivate you to work harder than ever to excel in your field.

I Know Why The Caged Bird Sings by Maya Angelou

This is an autobiography written by my all time favorite writer and poet, Maya Angelou. I Know Why The Caged Bird sings is also a revolutionary book that depicts the power of literature in doing away with racism and discrimination.

The beginning of the book shows how Angelou and her brother were sent by her mother to live at her grandmother’s place. And the book ends with the 16-year-old Angelo becoming a mother. In between, Maya Angelou describes how she had been attacked and violated by a man many times her age when she was just eight years old. This book also addresses important issues of molestation, rape, and racism. The strength with which Angelou writes deeply is encouraging for writers of all generations.

This book is about Chinese American immigrant families living in San Francisco. There, they start a club which is called The Joy Luck Club where they play Chinese games and feast on a great variety of foods. The story has about 16 interconnecting stories that revolve around four Chinese mothers and their American daughters.

Tan uses her wit and command over writing to explore the difficult, painful and affectionate connections between these mothers. This book is interesting as it shows how mothers and daughters can hurt each other and with time they also forgive each other. This unique mother and daughter bond depicted in this book is what I like the most about The Joy Luck Club.

My Story by Kamala Das

This is a biography written by one of the most outstanding poets of India, Kamala Das. I like this book because she is one of the first Indian women who openly talk about her sexual desires in her book. Her writing is bold, unique, and unconventional.

This book was first published in Malyalam and then translated to English. I like Das’s realistic way of writing and how she recounts her days for self-awakening as a woman and a writer through her books.

The God of Small Things by Arundhati Roy

In The God of Small things, Arundhati Roy talks about a pair of twins, their childhood and how their lives are devastated due to the ‘Love Laws’ that lay down specific terms of love such as who is worthy of love, how much should one love, and how should one love. The book also tries to discover how small things affect people lives and behavior in a great way.

I feel this book is a result of passion and commitment. It’s an amazing and a rich novel that teaches us how life is not all about big achievements. In fact, it is the small things that make us happy or unhappy.

Talking About Jane Austen in Baghdad: The True Story of an Unlikely Friendship by Bee Rowlatt
The book shows how despite having many superficial differences, we as humans still have a lot in common. This literature is about a heart touching friendship between a London mom and an Iraqi teacher who seem to be different yet so similar.

I love how this book unfolds as the two characters explore their friendship breaking the barriers of caste, race, religion, and age. The emails that these two characters share touch upon everything from Shia-Sunni conflict, Iraq war, corruption, baking, hairdressers and motherhood. Rowlatt’s writing style is charming, witty and intense at the same time. It will also help the readers get an idea about the horrific lives of many Iraqis.

Nepal has a clear and straightforward path to greater prosperity but achieving its full potential requires deeper connectivity with the... Read More...

“Black is bold, black is beautiful, black is gold”. It is a natural color, achromatic color of maximum darkness, having... Read More...

No one bold enough to hold polls: Mahato